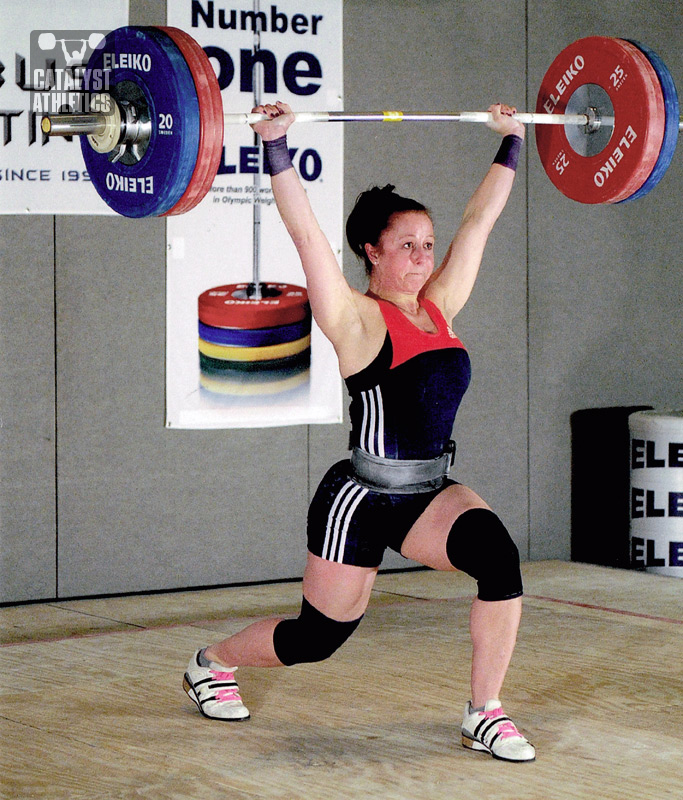 See more articles & videos like this in the Weightlifting Competition Performance collection.
One of the most common questions I get through the various media through which I’m connected interminably to the weightlifting world is how to properly warm-up for competition. A lot of people are trying weightlifting competition for the first time and have no coach, and a lot of coaches are finding new athletes who want to try competition, and neither know how exactly it all works in the warm-up room. Understandably, this is a source of a great deal of stress and nervousness. I’m going to try to lay out the process as simply and clearly as possible to help you get started in competition. Understand that this article won’t contain every single minute detail of competition rules and possible scenarios, but it will be more than adequate to get you smoothly through just about any competition so you can start gaining the experience and confidence on your own.
The Basic Competition Process
First, let’s make sure everyone knows exactly what happens in a competition, as it’s quite a mystery to a lot of people who’ve never actually been there. Each lifter has three attempts in the snatch, and then three attempts in the clean & jerk. Each attempt weight can be selected totally independent of the others, but an upcoming attempt can never be less than what’s currently on the competition bar (and you can’t repeat a weight you’ve already lifted successfully, but who would do that anyway?). That is, you can move up in weight even if you miss an attempt, and you can increase by any amount in increments of 1 kg. All attempts in the snatch are completed by all lifters in the session, and then all clean & jerks are completed, normally with a 15-minute break between the snatches and clean & jerks (This break is sometimes reduced somewhat if sessions are running late, particularly in local meets).

Lifters are separated into their weight classes and each weight class has its own session. In most local meets, multiple weight classes are combined into a single session, so there may be a fairly big range.
Lifters will declare their opening snatch and clean & jerk attempts at the time they weigh-in (2 hours before the session starts). These numbers can be changed later, but these declared openers will be used to create the initial lifting order of the session. The weight on the competition barbell will always start with the lowest attempt weight and work up to the heaviest attempt weight of the session. That is, if the lowest snatch opening weight is 80 kg, this will be the first weight loaded on the bar, and the lifter who declared it will be the first lifter. If this is you or your lifter, you need to start warming up before the session actually starts, so if you know or think you’ll be the first or one of the early lifters in the session, be prepared (how to do that later).
Once the next weight is loaded on the bar, the current lifter will be announced, and that lifter then has 1 minute to begin the lift. After each successful attempt, the next weight will be loaded on the bar (or the bar tightened if the same weight will be used by the next lifter). If there are other lifters at the same weight, they’ll all take it before the weight is increased to the next highest declared weight. The order of lifters if the weight is the same is determined first by the lowest attempt number (i.e. first attempts go before second or thirds, and second attempts go before thirds); then the athlete lot numbers (lowest lot number goes first). Pay attention to this because if there are multiple lifts at the same weight you’re lifting, you can be off your timing by a significant amount.
Getting Warmed up at the Right Time
First, you need to determine what your opening attempts and warm-up lifts will be. Let’s say you’re going to open in your snatch at 100 kg. Use a warm-up process that’s familiar to you. In other words, do basically what you would normally do if working up to a 100 kg snatch in the gym, but keep it as low-volume as you can while still getting adequately warm.
An example would be:
Bar
40 kg
40 kg
60 kg
70 kg
80 kg
90 kg
95 kg
I like doing 2-3 sets at the lowest weight. This helps get you nice and loosened up without wearing you out. You can do doubles or even triples here depending on what you need and like. After the first couple weights, stick to singles only. Remember, you’re not training, you’re preparing to lift maximal weights in competition.
The trick to competition is warming up with the right timing so that you’re ready for your opening attempt. You don’t want to still be warming up with 50 kg when they call you for your opener at 100 kg. Likewise, you don’t want to take your last warm-up snatch at 95 kg and then wait 15 minutes until you take your first competition snatch at 100 kg.
The first thing you need to do is check the attempt cards (the cards you entered your opening snatch and clean & jerk on when you weighed-in). They’ll be laid out in order on the table so you can see all of the opening attempts. Find yourself or your lifter and count how many lifts will be taken in the session before your opener. This requires a bit of guess work—you have to make assumptions about how big the jumps each lifter will make between their three attempts to know how many of those attempts will take place before yours or your lifter’s first. 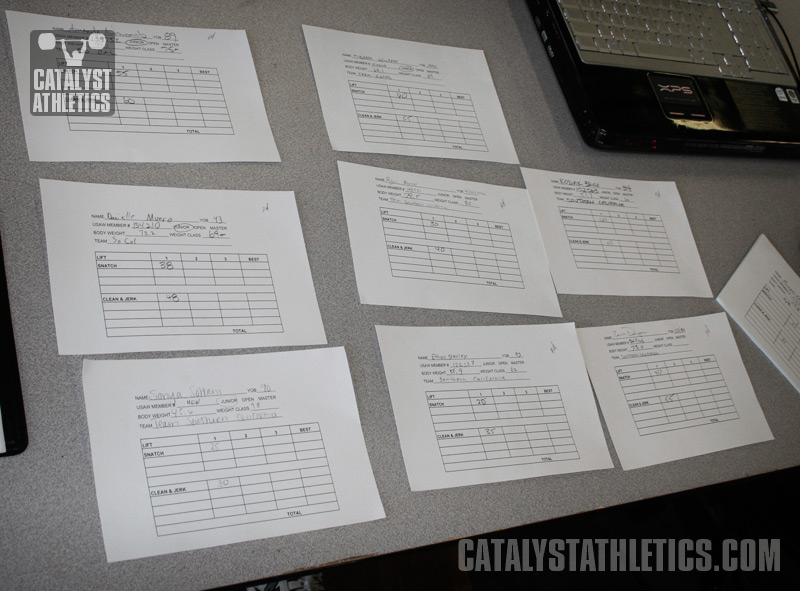 Get more info in the Weightlifting Competition Guide e-book.

See more articles & videos like this in the Weightlifting Competition Performance collection.

Tanay Gurjar
Brilliant stuff...now i understand why coaches bite their fingers and look nervous in Oly meets....so much plannning is needed!
Craig Cadonau
Hey Greg, really great article. I am about to go into my first competition in about a month, although I am not as strong in my weight class as I think I should be (94KG) I think it will be a great opportunity to see what the sport is all about outside the gym. Besides figuring out my warm-up weight and my openers is there anything else I can do during the few weeks before I compete? I am currently on one of your programs, do I just keep doing this till a week out? Any help would be greatly appreciated. Thank you for everything you do for this sport!