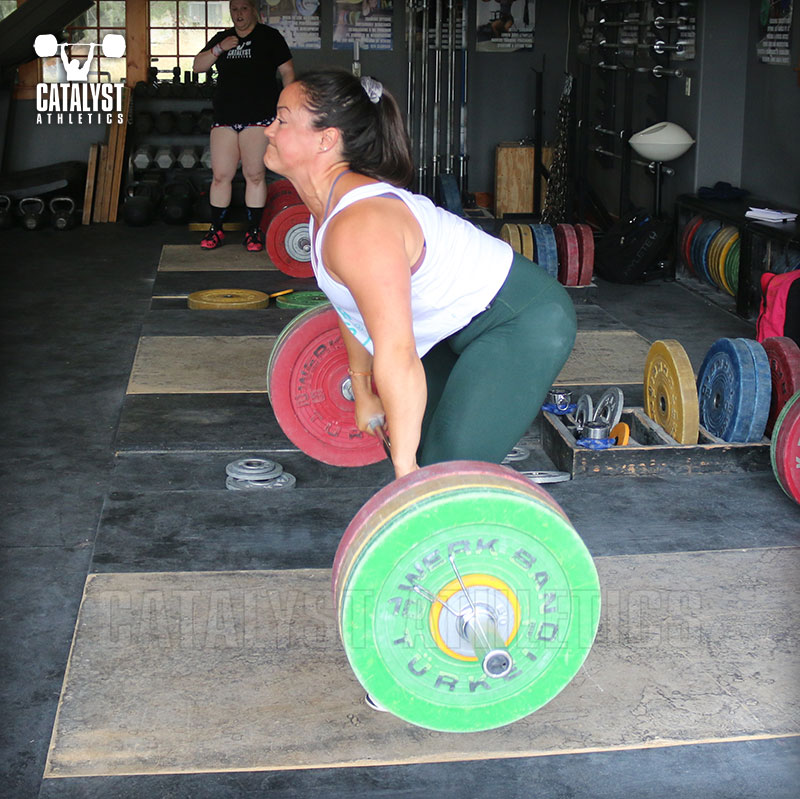 See more articles & videos like this in the Pulling Position & Balance collection.
You hear the cue to stay over the bar in the snatch and clean, but you’re not sure what that means, and you may even be confounded by the fact that it seems every elite lifter in the world is actually behind the bar at the top of the pull. I’ve had more than one internaut tell me angrily and with absolute conviction that former elite weightlifters teach at seminars that the shoulders never get behind the bar, and never respond to my questions of why they’re all behind the bar at the top of the pull just like they’re telling me my lifters shouldn’t be… Let’s clear up the confusion, because it’s actually very simple.

Staying over the bar simply means keeping the shoulders over or in front of the barbell in the first pull. Typically we want the shoulder joint approximately above the bar until about the knee, and slightly in front of the bar between the knee and mid-thigh. I teach as the default the shoulder joint directly above the bar in the starting position, which orients the arms vertically when viewed from the side. This can be adjusted somewhat depending on proportions, but the shoulders are never farther back from this position.

The purpose of this position is to help maintain balance and bar proximity while moving us into an optimal position for the final upward explosion of the second pull. That position is balanced over the whole foot, the shins nearing vertical, and the shoulders at least slightly in front of the bar.

This position allows maximal hip extension force and a natural scoop of the knees forward under the bar to allow vertical leg drive to contribute to bar elevation and proper trajectory up instead of out.

Note that the actual position and timing will vary based on proportions and relative hip and leg dominance. Lifters with shorter, stronger legs and longer trunks will naturally move behind the bar sooner to capitalize on that leg strength, while longer-legged lifters will tend to stay over the bar longer to exploit their better hip strength. This can be seen when comparing the motions of the average Asian and European lifters—the principles are identical, but the expression varies.


Allowing the shoulders to move behind the bar early—ie not staying over the bar long enough—reduces possible hip extension force, begins shifting the balance backward, and prevents complete extension of the body in the second pull—the body can’t complete the extension for maximal force and elevation because to do so would place the center of mass so far behind the base that we would fall over. This means a weaker, incomplete pull and usually a jump backward away from the bar, particularly of the feet if not the entire body.

The shoulders do and must move behind the bar at the top of the pull. A proper finish position will place the extended legs approximately vertical with the hips somewhat hyperextended to bring the shoulders slightly behind the hips with the bar in full contact with the body. Reaching this position has nothing to do with staying over the bar or not—this is a different phase of the pull than the phase in which staying over the bar is desirable. And this evidently is causing a lot of confusion out there because it’s not being explained clearly. No one who knows anything is saying the shoulders never move behind the bar—they’re saying they should never move behind the bar before a certain point of the lift.

Staying over the bar is achieved by simply not opening the hips until the bar is approaching mid-thigh and we’re intentionally initiating the second pull. In other words, we’re trying to stand from the starting position to the second pull entry position without significantly changing the angle of the back. Just push against the ground with the legs and maintain balance while actively pushing the bar back toward the legs.

Staying over the bar properly requires three things—the understanding that you need to, the skill to execute the correct motion, and the posture-specific strength to allow that motion with heavy weights. In weightlifting, skill is inextricably tied to strength—it doesn’t matter if you know what do to and how to do it if you don’t have the strength to execute that skill with heavier weights. This is possibly the problem where this is most commonly demonstrated in the sport.

Remember that none of these exercises will be effective unless you’re in the correct positions—they will strengthen exactly the position and balance you perform them with, so take your time and make it right.

anytimestrength
Wonderful article, I learn new information from your article. You are truly inspiring, Its really appreciated if you advise me on leg press vs squat weight which exercise is best for legs. Thank you and keep posting, I am always excited for your upcoming Post.
Zach
Im confused onthe 3rd position. Ive heard some people describe it as a bend in knee AND hinge at hip, and then others say bend at knee and vertical torso, with no hinge at hip.

Can you point me to the correct answer?
I'm a longer torso lifter.
Zach - here is an article that I think you might find helpful, it describes the various hang positions. It looks like you're describing the high hang position and the power position.

Zach
Thank you for the help! However I am not seeing the link? Maybe I am just missing it?
Here it is: https://www.catalystathletics.com/article/1917/All-Hang-Positions-Great-Small/