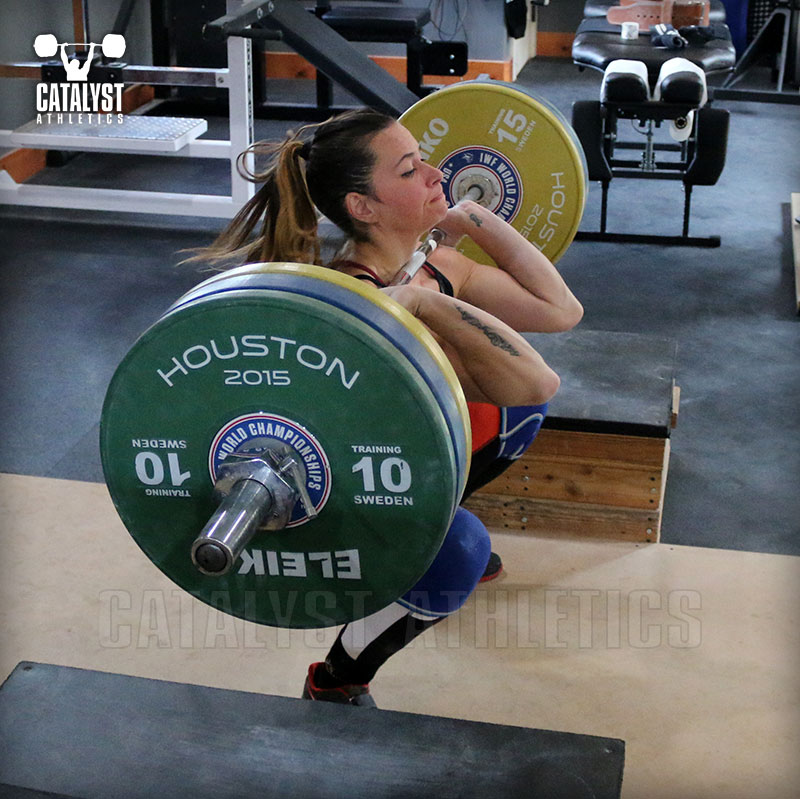 See more articles & videos like this in the Weightlifting Program Design collection.
I’m always amused seeing what people have to say online about weightlifting program design—it’s either the most complex thing in the world that no one except a few geniuses somewhere in Asia and Europe understands, or it’s the simplest thing ever and anyone who can’t make progress or even discusses it is an idiot.

I’d argue the truth is somewhere in the middle. It can certainly be complex conceptually and overwhelming in detail at times, particularly as the athlete in question advances, but it can also be simplified many times in many ways.

In the last episode of the Weightlifting Life podcast, we answered a question about selecting weight and rep schemes in training programs, so it’s been on my mind—this is a really common question and one that’s difficult to answer succinctly. I’ll see if I can provide at least a good sense of how it works from my perspective, but be forewarned that you’re not going to come out the other end of this with a simple formula.

First of all, there are a number of methods of training that involve different fundamental approaches to this question. The big categories would be a Bulgarian-style heavy single approach, an all max all the time approach with varying rep ranges and more exercise selection, and a more planned progression.

Bulgarian Style I think at this point, most people have a pretty good idea of what this looks like: Daily maximal singles in the competition lifts and squats. Occasionally some doubles in the squats, usually as back-off sets after a single. You don’t need to know a whole lot to implement this—really you just have to figure out the right frequency and volume for yourself or your athlete(s). This may include variations like back-off sets and waves and multiple daily sessions.

All Max All The Time Like the Bulgarian-style approach, this approach uses daily maximal efforts; unlike it, it may use a very wide range of exercises and reps rather than just singles in the competition lifts and squats. This approach may use back-off sets, planned back-off periods, or not genuine maximal effort.

Planned Progression This approach might be what we call traditional, i.e. it’s what most people expect to see a complete weightlifting training cycle look like—prescribed intensities, reps and sets that are modulated with intent over the course of the cycle to produce the intended results. This approach may also be done without assigning actual weights beforehand but instead using the judgment of the coach or athlete to select weights each session with the goal of progressing over a specified period of time—that is, the effect is the same, but weights are selected by “feel” because the lifter doesn’t have reliable maxes or the coach isn’t familiar enough yet with that athlete.

Mix Of course, we can mix elements of all three basic approaches in a given program, and often that’s what is done. Typically my lifters’ programs contain pieces of all of these, at least at certain times.

So how do you decide what to do? Here’s where you’re going to be disappointed: much of the decision needs to be based on experience (especially with the athlete in question) and intuition. But here are some basics on what each is good for:

Bulgarian Style Advanced lifters with very proficient and consistent technique, who have minimal imbalances, who have minimal injury history, who have reliable judgment with respect to pushing or stopping (or a good coach on hand); competition training phases.

All Max All The Time Lifters who can handle relatively high volume and intensity, who don’t have established or reliable 1RMs for most lifts, who have reliable judgment with respect to pushing or stopping (or a good coach on hand), who respond better to reps/complexes than singles/doubles, who have no idea what weights they’re capable of; preparation training phases.

Planned Progression Lifters with well-established and reliable 1RMs (i.e. more advanced lifters), who are on a competition schedule, who can’t handle the all max all the time approach, who tend to push themselves too hard too frequently, who don’t have a coach to monitor a by feel approach and ensure it’s being done properly; preparation and competition training phases.

In short, reps and sets need to be selected to produce the amount of volume that works best for a given athlete. You can find loose guidelines for this in my book and other places, but the only truly reliable method is experience with that athlete to find what works. This also goes for actual reps—some athletes will respond best all the time to lower reps; some will progress better with higher reps; and some will respond best to a range. You start with the basics and then begin to experiment to discover what works.

Prilepin’s table is thrown out sometimes as a good way to select reps/sets/weight, but the utility of this is limited greatly in my opinion, and I have yet to meet an experienced weightlifting coach who actually uses it. It doesn’t take into account critical factors like the exercise, the age and experience of the lifter, the time in the training cycle, the rest of the training surrounding the exercise in question, etc.

When it comes to the Bulgarian-style or All Max All The Time approaches, you still have to select weights wisely—just not before the workout. There should still be some basic expectations and generally the goal is to avoid failed reps. Max is not perfectly accurate. Typically going to actual failure is far too taxing to maintain for any significant duration, while working just below that threshold is tolerable. This is why these approaches work best with the combination of an experienced lifter who is very in tune with his/her body and a good coach who is very familiar with that lifter and knows when to stop and when to push.

With the Planned Progression approach, weights are assigned prior to the workout, which of course means you have to know what will work. This is by no means a formulaic thing—you can have a general idea, and then the numbers have to be refined with experience (again, experience with the athlete in question is of primary importance here).

In other words, you may know that generally speaking, lifters will be able to do triples in the snatch between 70-85% or so, but that’s a huge range and pretty useless itself—you need to know what works for each athlete. The only way to learn that is to do it. Start conservatively and adjust if needed. The first exposure in a mesocycle is going to be the lightest and easiest (most of the time), so you’re going to start on the lower end (70-75% or so). Then through observation of and discussion with the athlete, you determine the difficulty and adjust accordingly. If you want the lifter to do 5 triples with the same weight and he/she is struggling on the first set, it’s too heavy. If it looks like he/she could bang out another two reps each set, it’s too light. Use your best judgment and make the changes. You’ll then accumulate records that allow you to use historical performance to determine future programming.

So where do you get these initial numbers? Trust people who have been around a while! Look at the programs of successful weightlifting coaches. Don’t just pull numbers out of your ass. Some adjustment is fine and almost always necessary—it shouldn’t be by 10-15%.

Personally with my own lifters, I rely on absolute weights primarily rather than relative intensity. That is, I write their programming based on what they’ve done previously, not on percentages of max. However, I record both so I can use whatever I want, and this also gives me more and more data for prescribing weights for lifters I’m not familiar with.

Week to week, those weights will increase until a back-off week and/or a change in exercises and/or reps (e.g. entering a new mesocycle). You may work to maximal efforts the final week, or to heavy lifts below maximal effort. Again, what you do will depend on what works best for the athlete. In any case, your choices on weight progressions week to week will depend on the starting and ending points (i.e. how big a difference there is between the two) and the difficulty of the weights each week (e.g. if on week 1, weights are pretty tough, you’re not going to bump 5% for the next week—you may go 2-3%).

On average, volume should be decreasing as intensity increases over time as well. This means either fewer reps, fewer sets or both. If the number of reps remains the same, you’re likely going to reduce the number of sets at the top weight. If on week 1 you hit 5 triples, you may end up with only 3 triples on week 3, for example. How much you need to reduce (if at all) will depend on how heavy the weights are and how much volume the lifter can manage.

With any prescription in programming, expect to make adjustments. No one ever gets it perfectly correct, especially early on. As a coach, don’t be afraid to change weights if you see the difficulty doesn’t align with your intention. And most importantly, keep records. You need to be able to look back and see what has and hasn’t worked, and the more information you have, the more you’ll be able to make generalizations and see patterns.

freddy
in my little experiance (1 year of training) you say all that i have feel in this year.
i always prescribe my workouts but evry time they go wrong by volume or by intensity or relative intensity. then i've tried to go by feel about those things, yes i know what i should do in the next workout but i'll find when im there how much weight and reps/sets i gotta do, the body is the best prescriber if u can listen to him.