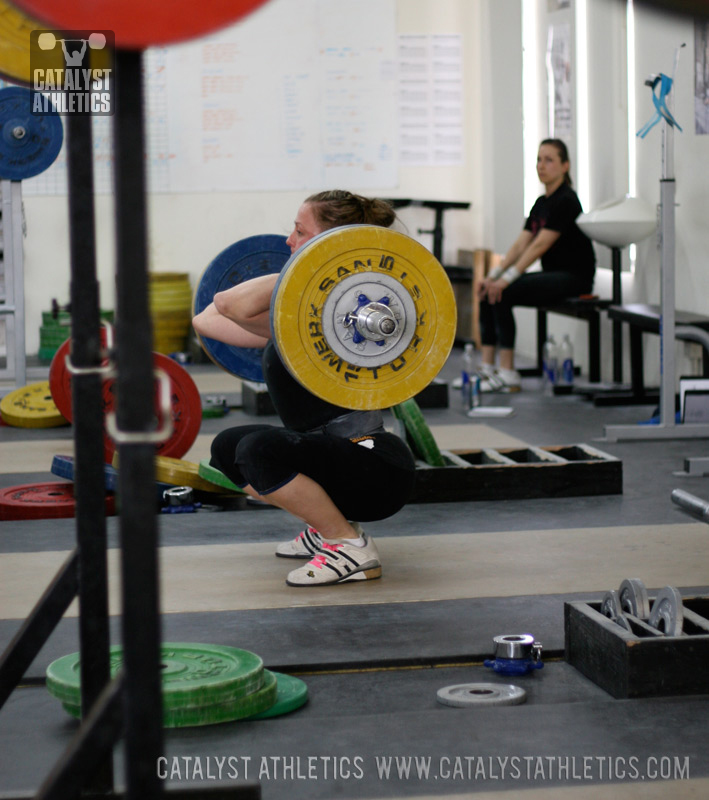 Hopefully, you all got to watch a lot of weightlifting action at the Olympics over the last couple of weeks. NBCOlympics.com is like a gift from the heavens, showing complete replay coverage of every weight class. This is the first Olympics in my life when I’ve been able to see the entire competition. When I sit down at the computer to watch one of these replays, I practically go into a trance. The whole world just tunes out for a while. One of my cats could be on fire and I wouldn’t even know it.

I could write a long recap of all the excitement, but I want to focus in on a specific situation here. For those of you who are real fans of international weightlifting, one of the biggest highlights of this Olympics that everybody was looking forward to was the men’s 105 kilo class. This was where we were going to see a legitimate battle of titans. There are two lifters in this class named Dmitry Klokov and Khadzhi Akkayev (both Russians), and they’ve been thrilling the world for the last four years with their stunning performances. Both of them have been world champions of this division at different times, with Akkayev winning their most recent matchup at the 2011 World Championship in Paris. Many of their monster training lifts have been put on YouTube in recent months, and both of them have clearly built up the best shape of their careers. The hype around these guys has been electric. They are two of the most popular athletes in the sport, and many people (including myself) considered their head-to-head collision at 105 to be the hottest ticket of the Olympic Games.

So after all the intensity and drama that we’ve been building up for the last year in anticipation of this war, both of them pulled out of the competition right before they were scheduled to lift. It was the worst disappointment imaginable. They both cited “medical issues” as the reason for their withdrawal, but most people involved in weightlifting immediately drew the conclusion that some kind of behind-the-scenes doping situation was the real cause. I don’t know what happened and I’m not going to make any slanderous innuendos in this post. All I know is that it buzzkilled the whole damn show.

Now, here is where an interesting predicament came into play. Klokov and Akkayev were clearly the top two 105 lifters in the world, but Poland’s Marcin Dolega has always been in the mix as well. Dolega is no chump, mind you. He’s a three-time world champion and former world record holder. However, his best numbers haven’t quite been at the same level as the two Russians in recent contests, and I think most observers believed he would be the bronze medalist at the Games. That was my prediction.

When Klokov and Akkayev pulled out, Dolega got the biggest gift of his career. With those two out of the game, he basically had it in the bag. Even though the rest of the 105 field was obviously world class, none of them were quite at Dolega’s level of ability. He had the gold medal in the palm of his hand after the Russians dropped out. So, how did it all shake down in the end? Dolega missed all three of his snatch attempts and bombed out of the contest. The weight he was trying to snatch was 190 kilos (418 lbs), which is eight kilos under his best official lift. I think he has snatched over 190 almost every time I’ve seen him compete internationally. It’s a weight he should have been able to crush, especially with three shots at it and double especially at the freaking Olympic Games. After he bombed out, the class was won by Olek Torokhtiy of Ukraine with a total of 412 kilos. Dolega’s totals are almost always over 420, even on his off days. There’s no way of getting around it, the guy just let the victory slip through his fingers.

There’s a lot to say about this. First of all, I’m not dissing anybody for bombing out of a weightlifting meet. I’ve done it. Most experienced lifters have too. It sucks a fat one, but it can happen sometimes when you’re really pushing the envelope. Second, Marcin Dolega’s status as a great weightlifter is set in stone, regardless of what happened in London. As I said, he has multiple championship titles on his record, along with being at the top of the world rankings for over ten years. He’s one of the finest athletes of his time period, and nobody can take that away from him.

However, this was his chance to add the sport’s biggest accomplishment to his record. Winning the Olympics is the great white buffalo, and everybody knows it. You become a part of the most sacred history an athlete can hope for when they hang that gold medal around your neck and your national anthem starts playing. For a weightlifter, it’s the highest peak of achievement. Dolega had a chance to take it, and he even had a lucky break that eliminated his top competitors before the show got started. I don’t know Marcin personally, but I think I can safely say that this is going to haunt him for the rest of his life.

As I went through my competitive years in weightlifting, something I learned is that most athletes develop one big goal in their careers. These goals are different for everybody. For some people, their big goal might be to qualify for a national championship someday. For others who are at a much higher level, their one big goal might be to win a world title. Some people might just want a 300 pound clean and jerk, or maybe 200 lbs. The ultimate height and prestige of your goal is usually connected to your talent and ranking in the sport, but the point is that most lifters develop a primary objective as the years go by. This is the main thing you want to accomplish before you hang it up, plain and simple. If you reach it, you get to breathe a sigh of relief and say to yourself, “Okay, I made it. Now, everything is complete.” If you don’t reach it, you always have to reflect on your career with a feeling that something is missing. Even if you had a great run, you never quite feel like you did everything you set out to do.

I don’t know what yours is. You might not have one yet, but you probably will if you stay in weightlifting long enough. Mine was competing at the Olympic Trials. I wrote a blog post last year where I talked about the ups and downs I went through on the way to making the Trials in 2004. I can definitely say that if I wouldn’t have lifted in that meet, I would look at my whole career differently.

Whatever your goal is, there will come a time when you know you’re close to it. You realize that you’re in your prime, and your big chance is approaching. When that time comes, you have to tear into that sucker with everything you’ve got. Make whatever sacrifices you need to make, but don’t let it slip by. Obviously there’s a risk of failure. You might give it everything you’ve got and still come up empty handed. That’s how it went for Dolega, and he’s not the only athlete who ever had that outcome. Those are the chances you take as an athlete.

If you don’t reach your big goal, you can always take a glass-is-half-empty perspective and look back at the whole thing like it was a waste. That’s certainly an option, to just piss all over everything and complain for the rest of your life because you didn’t get your perfect little slice of pie. Or you could go in the other direction, and realize that the chase was worth it. Actually, the chase is where you really got the satisfaction, your years of daily work with the people in your gym and all your competitive experience…both big and small. That’s what really made you a better person. Whether you got to take down your great white buffalo or not, your life is stronger after you’ve hunted it for years.

Everything inside you is tougher once you’ve given something your best shot, even if you missed.

Nick
Matt,
Couldn't agree with you more on how disappointed I was to not see the competition we expected to see at that weight class.. But how cool was it to see records being smashed in all the other weight classes. Expecially the kid from Kazakhstan, Ilin, that was just ridiculous. Looked like he couldn't have lifted any weight he decided to put on the bar!! Loved the Ipad app.. full replay of every single event! FOR FREE
Travis
For mine, nothing could beat the two world records set by Ilya Ilyin in the mens 94kg class. A 233kg clean and jerk?!?! That's nuts.

People will be talking about his gold medal defence for years.

kirk
Unfortunately, in Australia you needed to be with foxtel/austar to see any decent footage. All I got to see was some curious body hair choices from.a nameless athlete and a guy slipping whilst lifting an obscene weight. Very disappointed.
Tobias
The North Korean who clean and jerked tripple bodyweight was also pretty impressive. Winning the gold from the B-group. Cool shit. Would be interesting to have an insight in North Koreas doping program.
Geoff
For me the high spot was seeing the Chinese lady (75kg +) Lulu attempting a 190kg clean and jerk and the British commentator stating that none of the British men could lift that much!
Claudio
For me, it was thrilling to see Torokhtiy win. He did not have any outrageously incredible training videos on youtube: he just showed up, did his honest, a-whole-life-in-the-making job like everybody else and won, and that's all that counts! He probably approached the whole thing with more like a "let's do it and come up empty handed" attitude. Just imagine what his final lift must have been like, the one lift that would have made it!

The +105's were surely more boring for me than the "disappointing" 105's. The only interesting lift there -for me- was Orsag's 239kg CJ
Julz
Ilyin was BRLLIANT. we were there! best of all was how, for his earlier lifts, he barely stopped walking before he picked up the bar and chucked it overhead. and that was at a weight where most of the field had already dropped out.. such a showman, really got the crowd going, and raised the roof when he did his last lift to break the WRs.. i'm so glad i'd swapped my 105kg tickets (which he would also have won!) for the 94kg class.. what a class act. so glad i got to see that.
Travis
Wow Julz! That would have been AMAZING to see live. Great call on swapping weight classes!