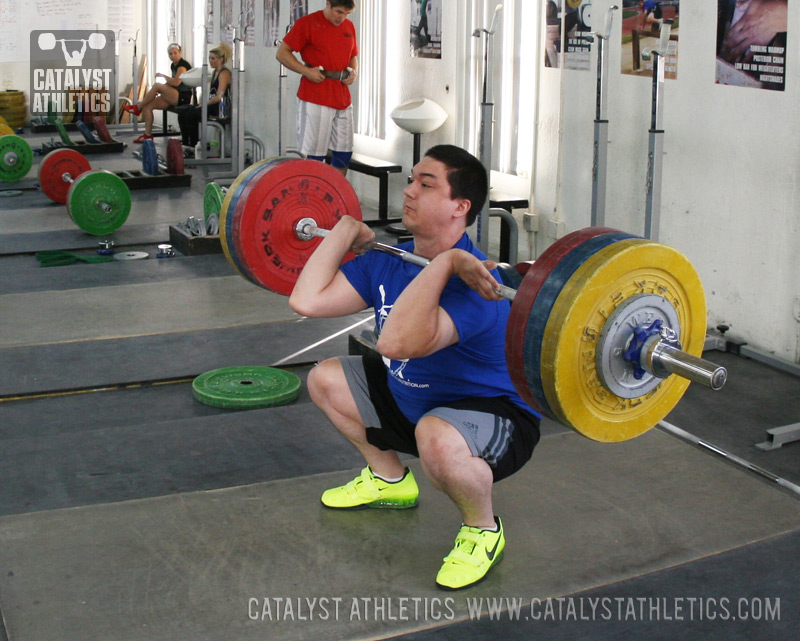 The American Open was this past weekend. It’s the biggest Olympic weightlifting competition in the United States. Almost five hundred of the best lifters in the country traveled to Dallas to rock and roll.

One of my athletes had a challenging day on the platform. In the snatch, she made her opener of 64 kilos (140 lbs) and then missed her next two attempts. Her best official snatch is 70 kilos (154 lbs), so that means she went to the biggest meet of her life and lifted 14 lbs below her PR. That’s not a result that makes anybody happy, brothers and sisters.

So, how did she respond after that? She came back in the clean and jerk and went three-for-three, finishing with a huge new personal record of 89 kilos (196 lbs) on her third attempt. And she did this despite the fact that the competition platform broke during her session, and she had to wait around twenty minutes between her first and second attempts while they repaired it.

I love this performance. You know why? It’s because she got kicked in the face during the snatches, and then she battled back in the C&J to nail her biggest competition weight ever. That’s what this post is about…battling back.

This is a sport for fighters. If you stop and think about it, you’ve got a fight on your hands every day when you come to the gym. You’re fighting against a big heavy inanimate object that doesn’t give a damn if you fail, get injured, or lose. More importantly, you’re fighting against yourself. You see, there are things inside you that want to hold you back. We all have them. These are things like self-doubt, fear, anger, nervousness, etc. Some people have little traces of them, and others have huge doses pumping through their blood like the plague. Your specific amount depends on who you are, and what you are. But we all have them, and they want to kill our spirit. Think about your own demons right now. You know what they are.

You want to know the really lousy part? Sometimes they win, and you lose. The worst parts of your personality rise to the surface and they cause you to fail. Then you get to sit there with your failure exposed to everybody. It’s not like being in a team sport, where there are other players on the field with you to share the misery and bear some of the load. Nope, this is weightlifting. Your failures happen while you’re on a big platform all by yourself, with everybody in the world looking at you. After they happen, you get to walk back in the warm-up room, sit down, and start asking yourself a bunch of really terrible questions.

This is the best moment in your career. Seriously, it is. You might not know it, but this is where the beauty of weightlifting shines the brightest. You don’t believe me? Let me explain.

These moments of failure are the times when you get to find out what kind of person you really are. We’ve all wondered how we would respond to some of the biggest, scariest challenges in life. How would I perform if I ever had to go into battle? Would I be able to survive in prison? Could I handle a divorce? Let’s admit it, we’ve thought about these things.

Well, most of them are rare situations that you’re never going to have to deal with. You’ll probably never go to battle or prison, so you won’t have to worry about those. Divorce? No comment…

However, the defeats of your weightlifting career are similar types of predicaments. Are they life and death? No. Nobody is trying to shoot you or shank you. But you can definitely say they’re a kind of mental/emotional life or death situation. I don’t think that’s inaccurate. If you let these defeats wipe you out, you’ve lost part of your spirit. The best parts of your personality…the hope and the enthusiasm and the happiness, the things that make you a good person…they get chipped away if you don’t battle back against your failures. A little part of you dies inside, and it’s probably something you’re going to need later in your life when you’re building a career, raising a family, or trying to survive the death of a loved one.

Weightlifting forces you to battle back within your workouts, in competition, and in the big long-term picture of your career. We’ve all had bad workouts and bad meets. But think about the times when you’ve had bad time periods. I’m talking about extended phases when rotten luck just kept pounding you over and over. It seemed like it was never going to end, just one horrible break after another.

I competed at the American Open back in 1996. I got injured on my last C&J attempt and lost the bronze medal on bodyweight. Then I came home after the meet. Within a two-week period, my girlfriend broke up with me, I lost my job, and my car broke down. And you want to know something? That wasn’t the worst month of my career. Not even close. Hell, my current status makes that month look like a vacation in Hawaii. Right now, I’m 41 years old and I’ve had two ACL reconstruction surgeries in the last three years. I know I’ll never get back to the Olympic Trials, but I want to be a competitive lifter for the rest of my life, even if it’s just on a local meet/masters level. I honestly don’t know if I could live happily without it. I don’t mind telling you that I’m battling back pretty hard these days, probably harder than I’ve ever had to. As an athlete, I’m literally fighting for my life.

How about those of you who are sitting on top of the world right now? You’re on an ass-kicking rampage, so this conversation about defeats doesn’t really apply to you. Enjoy it, because I’m sure you earned it. You had to fight through some of these moments I’m describing to get it.

And the disappointments will happen again. I guarantee it. Is that a doom-and-gloom prediction? Am I forecasting failure in your life? That’s not how this is supposed to come across. I’m acknowledging that we’re all going to have to battle back from something at some point. Anybody who doesn’t get this is living in a dream world.

You won’t like it when it happens. None of us do. But a fighter’s life isn’t easy. This is the path you’ve chosen, and it’s a great path. You’ve chosen to do something with your life that will be the source of the greatest victories you’ll ever have. Why will the victories be so wonderful? Because you battled for them…and you won.

Best of luck to all of you.

Daisy
Thank you, I needed this!
Ben T.
Thank you, sir. I am not battling back in the sport, but in life and this was great to read.
Justin Carvalho
Best artical I've read in a long time. Thanks.
Josh Macdonald
Her battle began 1 year earlier with a potentially devastating event and her fight back has inspired many.
Angela
"Anybody battling back from a long streak of horrific defeats? Anyone…anyone?"

Thank you for this article. It was much needed at this point in time.

Bill
Great stuff Matt. Well said. Pure motivation to lift some iron.
Ash
great read, perspective at its a best.
Rod
I'm an old guy who started lifting at 49 less than two years ago. You've hit the essence of weight lifting and life. Best article I've read on either one in a long time. Oh, and yes, I needed the reminder lately, too.
Vic
Love your blogs. They're so persoanl and you're so transparent. With these qualities what you write goes a long way with me. Thanks.
Mickis
I think you just put your finger on why I love this sport, it´s a lot like life itself. Nothing worth having comes easily.
Becky
What weight class is your athlete you referred to? Just curious.
Gail
Excellent!
Darla
My life is really amazing, but, I've been battling through a lot of crap lately --with life and lifting. Often it seems like 'one step forward, two steps back'. This has hung on my fridge since the day I read it, and it helps. Thank-you for your humor and words.
Isaac
This is awesome and speaks on so many levels.. I used to be a boxer then got into this sport and it is very similar. You have a team and people help ya get ready and ya have teammates but when it's game time it's all you.. mental fortitude is essential..