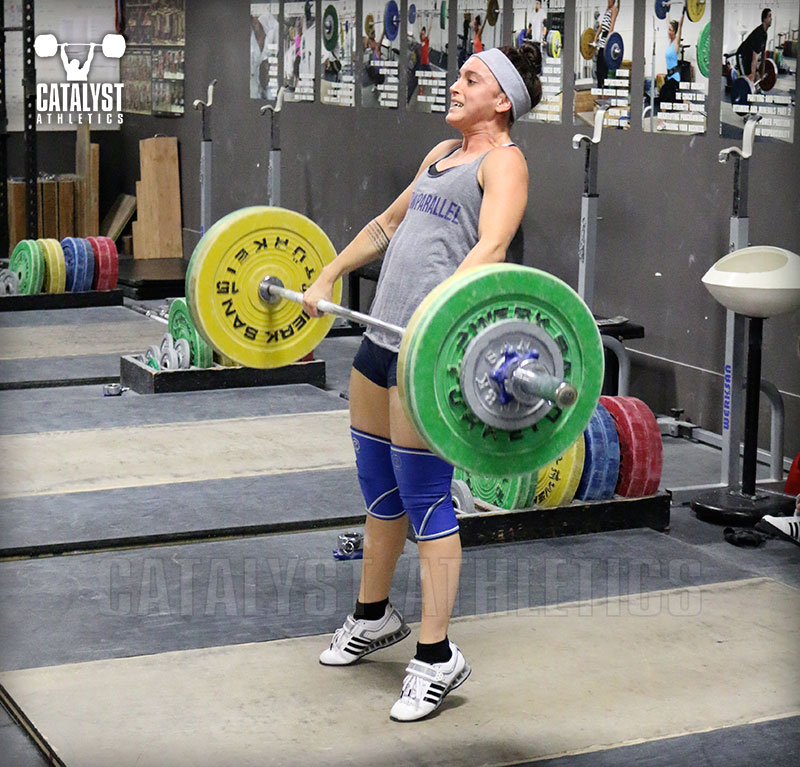 I told a lie recently.

One of my students asked me, “What’s your most embarrassing moment ever?” I replied with, “I can’t really think of one, because I don’t get embarrassed easily.”

The part about not getting embarrassed easily is true, but it’s a lie to say that I can’t think of a most embarrassing moment. I can definitely think of one, and I’m going to tell you what it is.

I got pissed off in a workout one day and I kicked a big hole in the wall of my coach’s gym.

Yup. I was twenty years old at the time, training up in Washington in the old Calpian gym. I was having a lousy snatch workout and I think I had missed 115 kilos eight or nine times. After the last miss, I totally freaked out. Walked off the platform and kicked a huge frickin hole right through the drywall.

It still bothers me to think about it, to this day. I can’t believe how immature and stupid I was. My coach, believe it or not, didn’t blow a gasket and throw me out of the gym. He could have, and it would have been justified. But I think he could see that I was completely mortified after I did it, so he just gave me a stern talking-to and told me I had to fix the hole. I went back the next day and patched it up. Didn’t do a very good job, but I tried. Then I slinked around the gym for the next few days like a dog that got swatted for pissing on the carpet.

I had a very hard time controlling my temper when I was young. I was a walking ball of testosterone with a short fuse and absolutely zero tolerance for failure. The hole-kicking incident was the last time I completely exploded, because my coach told me he would get rid of me if I pulled another stunt like that. But before I started training at Calpians, there were other special moments in my old gym where I went on a screaming rampage of F-bombs, smashed chairs, etc. I picked up a weight tree and threw it across the room once too. Guess what? None of those things made me lift better.

The reason I’m telling you about this is because I want you to apply it to your own lifting.

Everybody wants to find the perfect workout program. We read and research and work with successful coaches so we can develop a training plan that will make us better. And we all want to make our technique flawless, too. We analyze our movements down to a gnat’s ass until we’ve wiped out all the errors that can hold us back.

But I’m telling you something, brothers and sisters. All of that stuff means absolutely nothing if you can’t find a way to hold yourself together mentally when your training starts to get crappy.

I’m talking about freak-outs in the gym, basically. Have you ever had one? You know, a moment where you lost your cool and had a meltdown because you were failing over and over, and you just couldn’t fix it? Methinks you’ve probably done this, in some way. Different people have different manifestations. Here are some of the most common ones:

As you can see from that list, meltdowns don’t always have to be loud and demonstrative. Some of the worst tailspins are the ones that happen on the inside. These are the people who just sit quietly on the bench, maintain their outward appearance, don’t bother anybody, and convince themselves that they’re worthless pieces of s—t.

And there are different levels of severity, too. Some people just get mildly annoyed at bad training, while others practically turn into the little girl from “The Exorcist.” It all just depends on individual temperament.

These things completely erase the quality of your programming, the technical instruction you’ve had, etc. If you can’t hold your mind together on your bad days, none of the rest of that stuff matters. You might have the best form and the best training conditions known to man, but they don’t mean squat if you’re curled up in a fetal position, quivering like jello and whispering, “I live…in a cocoon…of horror” over and over.

Listen, it’s human to have these moments. Weightlifting is an extremely emotional sport. Trust me, I’ve seen some of the best athletes in the country blow their lids. You know those people you look up to? Those great champions and legends you admire? They’ve had their freak-outs. I can guarantee it. They might not have kicked a hole in a wall or thrown a kitten down a well, but they’ve lost their composure in some way.

You need to understand that it’s a good thing to get pissed off when you fail. I wouldn’t give a plug nickel for a weightlifter who doesn’t get angry after a missed attempt. You SHOULD get mad when you screw up. But there’s a difference between “getting mad” and “flipping out.” You can get mad, as long as you maintain your focus and stay sharp. Freaking out happens when you go over the edge, and you lose your control. Some people have a hard time walking the line between those two points.

But it can be done. Hell, look at me. I went from a volatile brat who kicks holes in walls to what you see before you now…a walking model of moderation and stability. I’m a really good person. I’m also a really good singer. I’ve been called “The Songbird of My Generation” by people who have heard me sing.

Sorry, I’m off topic and I’m making jokes. I just quoted the same guy who gave us the title of this article. He’s pretty good at blowing a gasket. Some of his best moments look like some of my early days of wigging out. Bonus points to anybody who can quote some of his best lines.

Long story short…settle down and relax. It’s easier that way.

Saturday morning I get pissed as hell about some lift I screwed up and I pick up a bumper to smash against the ground. I catch myself and then decide to just gently set it down.

I go back and make the lift and then after that my training partner starts giving me shit about the violent pick up of the bumper and then the gentle laying down later. So even when you catch yourself and make the right choice everyone is watching the way you act.

Colin Rigney
"It's like fishing with dynamite"
Tyler
Typically, misses end with me streaking through the quad
Keith
Excellent article!! I used to be a mess during a bad training day. I've cussed, walked out and basically quit, and so on. It's all about perspective, and you're right on!!
Wayne
I'm a crossfiter I was trying to get my double unders and it wasn't working so I through my rope. Not a smart move on the follow through the rope whipped me on the back of the neck hurt like hell. Serves me me right I suppose
Tim Retzik
As a masters lifter I often threaten to retire when things don't go my way. I've come out of retirement more time then I care to admitt.
Geoff Hegedus
Great article! Reminds me of when my coach spoke to me after a string of bad sessions that were really tough and miserable. He said I should enjoy these workouts; great workout are always fun, but how you handle the bad ones will define who you become in your lifting career.
Inga
You put the perfect words on my gym freak-outs which unfortunately happen way too often! This makes me feel a lot better about my insecurities in lifts, will try to remember your words next time I freak of my failing.
Atsushi
"DUDE DIED IN A HANG GLIDING ACCIDENT... WHAT AN IDIOT!!"
Sam
Wayne. I've thrown my jump rope plenty. My double unders are way better after. As far as most embarrassing moments go... I don't play soccer but some visiting English friends of mine convinced me to jump in on a "pick up" match with the mostly central/South American guys that play at the park. Goal keeper on my own team was being friendly and cleared the ball to me about ten feet from the net. He threw it right at my chest and of course I cought it. Huge eruption of laughter and jeering as the other team kicked the penalty goal. I learned a lot from that. Soccer is dangerous and you can't use your hands. I only play if I get to be the goal keeper. Also it took me a long time of emotional hardship after that but it's ok to be laughed at sometimes