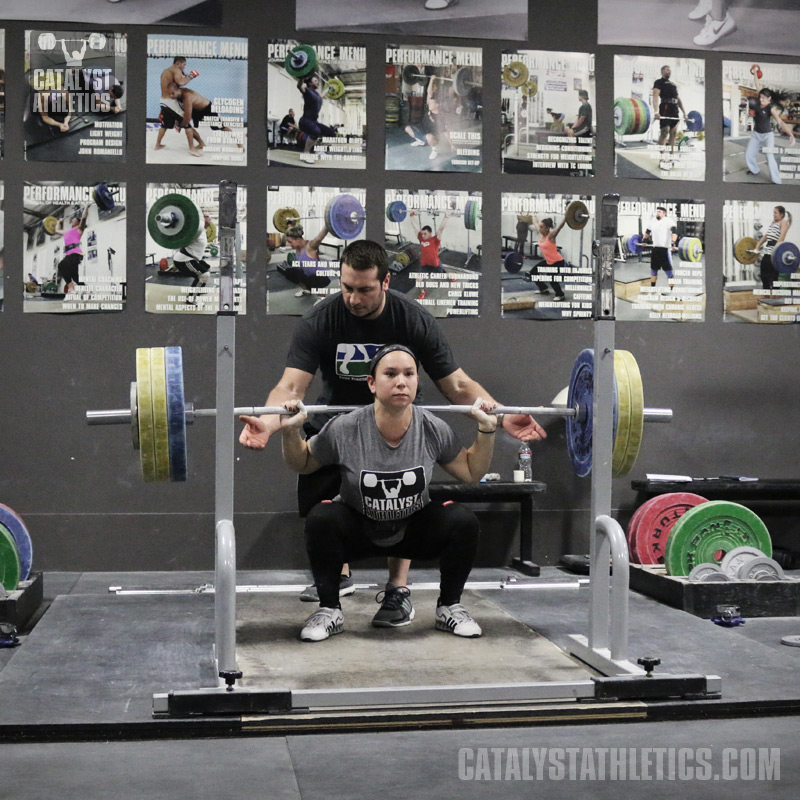 If that isn’t an attention grabbing title then I don’t know how else to do it. I’m going to give you the back story, the game, the rules and why it will help you out.

I train with two other guys at a Catalyst Athletics affiliate in San Diego called Outlier Barbell—that is until they get tired of my antics and throw me out. For now, however, my love of Motley Crue and crude yet effective tips about weightlifting technique are still tolerated. Anyway, we were in the middle of the Block and Pull cycle that I personally love but is a kick in the ass; in fact, it’s one of the few programs Greg actually warns you at the beginning that, yes, this will beat you down.

So one day before we were about to start the vicious cycle of Snatch pull + Snatch + Snatch Pull + Snatch and the same with clean off the blocks above the knee, I decided to start a little contest, something to keep everyone charged up and going. There are three of us—Mike Baumgarten, one of the coaches there, Scott Rutherford, a guy who liked what he saw going on and cruised over from the gen pop side of the gym, and me. The contest is simple: when you lift, you will be judged and given a score from 1-3 (three being the best, with half points allowed) on what your lift looked like, across the prescribed sets. The criterion is basically this: Did the lift look good? Or did it look like crap? If you were to walk by (better not be in front of me while I am lifting) and see just that lift would you think, “Oh man, this guy knows what he is doing,” or did it look like amateur hour?
A sample set could be this: Clean Pull + Clean + Clean Pull + Clean. The cleans looked great, but you armed the hell out of the pulls—you just got a 2 from me and a 2.5 from the other guy. Total the two scores from the judges (4.5), and that’s your score for the set. Now depending on how many sets you have, it can get interesting—we have had some very tight battles and even a tie so far. We settled that with just adding 10kg and made it a do or die set. I lost 6-5, so we didn’t even have to do it again. We have done this quite a few times and not once has judging been an issue. In fact, the results are usually chirped out before the bar hits the ground. The lifter might ask why, the reason is given, and corrections are made. I can honestly say this has been a great motivator and a huge help with technique correction.

Why will this make you better? Trust me, your intensity will perk right the hell up for this. I was kind of cautious about it changing anything when I first introduced it, but right away, I could feel the tension and anxiety start, and we loved it. The other great thing is that you will probably have your best lift—mine is the snatch, Mike can jerk and Scott can clean—so there isn’t one guy who can hit everything perfect in all three lifts, which in my opinion makes it even more interesting. We even used it for front squats: we were all hitting 6s until about set 4 of 7, and then you could start to see elbows dropping with each of us getting tired and the battle then really started. It also keeps everyone engaged—all eyes are on you and you get some really great feedback.
Now, I wouldn’t use it for every lift—in a given day’s programming, I believe it works best just for one lift.
Snacks! Dude, you said something about snacks!
OK, the loser has to bring in snacks for the other members of the group on the next training day; however, the loser also gets to pick the judged lift for that next training session (out of what’s already on the agenda for that day). It’s been fun to be warming up and see whoever owes snacks that day roll in and find out what kind of post-workout treat you get for your victory. If you train in a group, give it a shot—what’s the worse that can happen? Your technique gets better, you have a little out-of-meet competition, and you might end up with a breakfast burrito or a bag of snickerdoodles for your hard work.