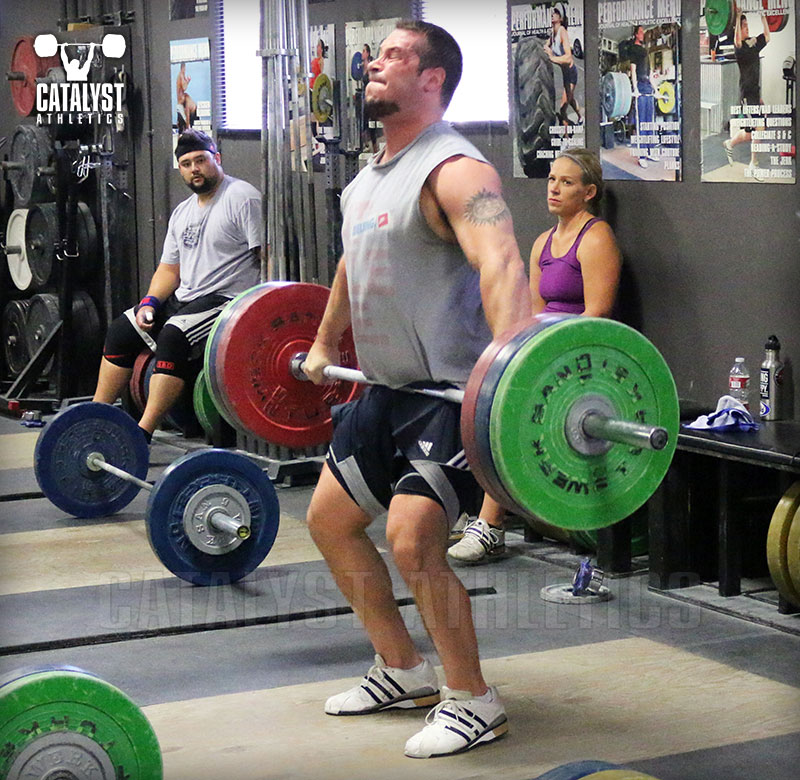 Remember when you first saw the snatch and clean and jerk performed by Olympic weightlifters? And I’m talking about REAL weightlifters… athletes with an advanced level of skill, possibly even championship-level studs. Blew your mind, right?
The first thing you noticed was how fast they were. And then you noticed how they all seemed to drive their hips into the barbell as it passed their waist and they accelerated the pulling movement overhead. That “driving the hips into the barbell” thing is what we need to take a look at here.
First of all, I’ve heard this technical movement described several different ways over the years. I don’t think there’s an official carved-into-a-stone-tablet name for it, but here are some of the ways coaches and athletes have referred to it:
And there are others. It doesn’t really matter which words or phrases you use to describe this movement, as long as everybody knows what you’re talking about when you refer to it. I’m going to use “hip drive” for this article. Got it? And I’ll give you a video that shows it, just so you’ve got a visual. I could pick any one of a million elite weightlifting clips for this since literally everybody who’s worth a crap uses hip drive, but I’ll go with one of my current favorites, upcoming Russian superstar Ksenia Maximova:
See how she drives her hips into the bar? That’s what we’re talking about, in case you didn’t know.
Hip drive, as you probably know, is one of the magic keys to the kingdom in the Olympic lifts. If you can figure out how to do it well, it’ll drastically increase the speed and power of your movement. It’s the secret weapon that allows you to use all that squatting and pulling strength you’ve worked so hard to build, because you’re using your legs and hips to pull the bar instead of your weak little Top Ramen arms.
NOTE: If you decide to abandon hip drive and settle for using your arms to pull the bar, congratulations. You’ll beat some of the people in your Crossfit gym, and you’ll get owned by real weightlifters who use their legs to pull the bar instead of their guns. Actually, if this applies to you, you probably refer to them as “gunz.”
Back to the analysis… Throughout my career as an athlete and coach, hip drive has probably been the most peculiar technical element of the OLifts that I can think of. I say this because there are two main things I’ve noticed about it:

Some people pick it up naturally with just a minimal amount of instruction and teaching.
The people who don’t pick it up naturally will have a very hard time learning it, regardless of how you try to help them.
You can think about your own lifting and identify which of these applies to you. Fortunately, I was one of the naturals. I can remember the first time a coach taught me how to do it. He let me watch a couple of experienced lifters who used hip drive really well, so I could see what it looked like. Then he told me, “When the bar passes your knees, drive your hips into it.” That’s all he said. Then I tried it, and the three or four people who were watching me all smiled and nodded and said, “That’s it. You’ve got it.” I’ve literally never thought about it much again, in over 25 years of lifting.
However, I’m also a coach. That means I fully understand how difficult and frustrating it can be for a lot of athletes who can’t seem to get the hang of it.
All I want to do in this article is give you a technique cue that might help. Some of you are trying to figure this thing out, or you’re struggling to teach it to others. You’ve probably gone through a gamut of descriptions, mental reminders, etc. So try this one:
Shift your torso vertical and get your legs under the bar, then jump and shrug.
This might work, and it might not. Your “torso” is the section of your body from your waist to your shoulders, in case you don’t know.
If you watch Ksenia’s movements in slow motion, you can see what I’m talking about. After the bar passes her knees, she starts to shift her torso into a vertical position (straight up and down). As the bar nears her hip joint, her thighs are under the bar. Then she drives and extends up into a movement that closely resembles a jump, and she shrugs her shoulders to complete the pull and pull herself down into the turnover.
I’ve used this “vertical torso, legs under the bar” terminology with athletes several times. It hasn’t been a 100% cure, but it has definitely worked more times than not. It usually has to be combined with hands-on instruction from the coach. And when I say “hands-on,” I mean it. Physically put your hands on the athletes and move their bodies the way they need to go. This is extremely helpful because it allows them to feel it.
NOTE: When I say “put your hands on the athletes,” make sure you understand I’m talking about manipulating their shoulders, hips, back, etc. Don’t clamp both your hands on their groin and say, “Okay, time to learn weightlifting!”
Also, the hip drive description and coaching I’ve given you here are obviously just a small part of the big picture. There are several other technical components that play into this thing. The use of the feet, staying over the bar, how to finish with the arms, etc…those are all important considerations that need to be handled during the learning process of the Olympic lifts. Please don’t launch into a “Whoa Matt, you left out a bunch of stuff!” rant, because we all know there’s more complexity involved than what I’ve written about here. This article is designed to do one thing: give you a technical cue that might help you solve a problem you’re having with a specific phase of the Olympic lifts.
It might help. Just give it some thought and see if it clicks.


5 Comments
Greg Everett
People freaking out about "jump and shrug" in 3-2-1...
Chris W
This is what I struggle with the most. Somewhere between the knees and receiving the bar is black magic. After about a year of constant practice and coaching it's starting to finally click.
JOSHUA
Good article, I think this is definitely easier to do on the snatch then the clean because of where the bar is contacting, at least for me anyways. On the snatch I've always been able to get the hips to contact the bar well without really thinking about it, but on the clean I have to consciously think about driving my hips into the bar or all I'll get a is a "scrap" motion up my legs.

I'll give this cue a try on my cleans.

JOSHUA
That should be scrape motion not scrap.
Randy
Exactly how I corrected myself...after many, many hours of slo-mo analyzing of top weightlifters and myself. Definitely a viable solution.