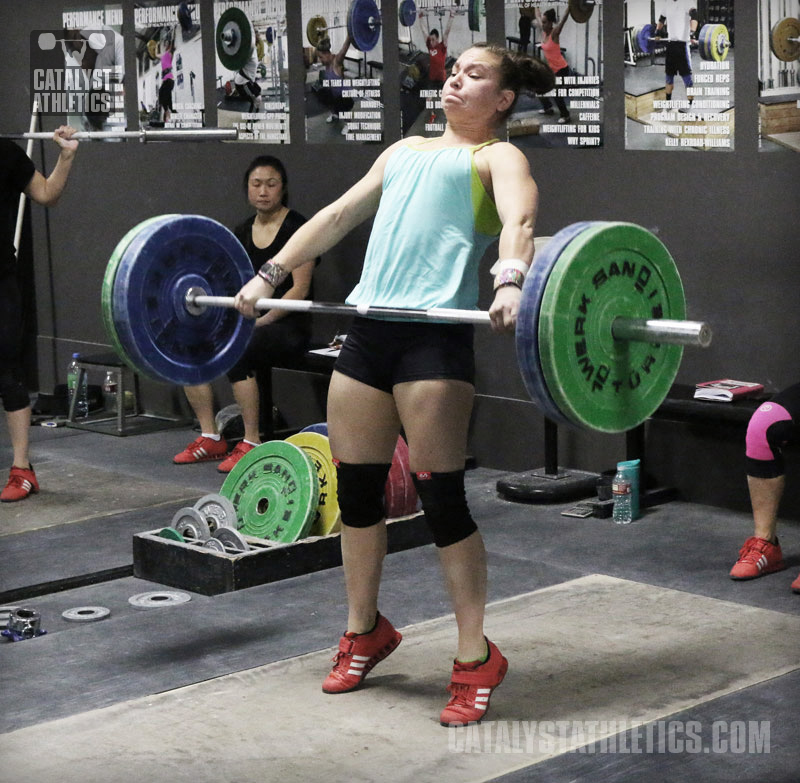 See more articles & videos like this in the Snatch & Clean Second Pull collection.
I’ve written a number of times on fashionable weightlifting technique. These things become fashionable not because they’re new, but because someone of often dubious influence thinks they are and gets excited about what appears to be a novel approach that can bear the weight of many hashtags. More often than not, they’ve been around for a long time, have been experimented with and evaluated by many coaches and athletes, and dismissed as being unsuitable generally, and only suitable for specific athletes in specific circumstances.
Covering this particular topic was a specific request from another coach who’s seen the recent increase of intentional arm-bending in the pull of the snatch and clean and is frustrated with addressing the issue over and over. I have no delusions that this article will clear this problem up, but at least it will provide some answers about the issue. At the very least, I’ll have a handy link to share instead of having to repeat my thoughts and potentially sound like even more of a dick than I mean to.

It’s important to recognize the difference between the idiosyncratic habits of elite lifters and attempts by less advanced lifters to imitate them.

A small degree of elbow flexion during the second pull of the snatch and clean may occur naturally for many lifters as a way for the body to naturally maintain as much of the existing bar speed during the transition of the knees under the bar, during which bar speed unavoidably decreases somewhat. Again, this must be allowed to occur naturally.

How to Fix It
If you’re intentionally pulling the bar up with your arms because you originally thought it was a good idea and have since changed your mind, just quit doing it. If it’s now become a habit you can’t stop that easily, you’ll need to get some practice time in to unlearn it. Focus on arching your back forcefully and keeping your arms internally rotated but elbows loose.
If it’s happening unintentionally, you’ll need to diagnose the cause so you know what to correct. It’s a pretty simple checklist:
If a narrow grip is the problem, experiment with wider grips. In the snatch, the ideal grip places the bar in the crease of the hips when hanging at arms’ length (just above the pubic bone so you don’t have to wear a Maxipad in your waistband to prevent the snatch from hurting). In the clean, try a grip that, with the bar held at your shoulders, the forearms are vertical when viewed from the front. This should put your hands about half a fist to a fist-width outside the shoulders. You should be able to get pretty wide with the clean grip as long as you’re mobile enough to establish a secure rack position with it.
If your balance tends to be forward in the pull, there can be quite a few reasons—too many to discuss here. Check out this article on jumping forward in the snatch or clean for causes and corrections.
Timing the initiation of the second pull properly is an issue of practice, but also being strong enough to maintain your position over the bar until it’s high on the thigh. Both can be helped with exercises like halting snatch or clean deadlifts, segment pulls or deadlifts, and segment snatches and cleans. You can get more information on that in the abovementioned article as well.
Finally, for you monkey-armed lifters who can’t use a wider grip for reasons such as not being able to maintain your grip in the pull, wrist pain overhead, or running out of barbell real estate, there’s a way to get the bar higher up into your hip without bending your arms—use your back. Stand in a high-thigh hang position and shrug your shoulders back and a little up and see how much the bar is elevated—it’s a significant amount (at least a few inches). This will allow you to bring the bar into a better position on the leg or hip without resorting to bending your arms. This still presents a similar problem to early arm bend with regard to potential slack in the system during the final acceleration—however, your upper back musculature is stronger than your elbow flexors, so you’ll be better able to maintain the position.

In the End…
As I find myself saying more and more lately, lift however you want to lift. I promise it doesn’t offend me if you want to bend your arms, hump the bar with limp legs, drop the bar onto your shoulders as roughly as possible, swing the bar overhead, or anything else. If you believe something unconventional you’re doing is making your lifting more successful, then by all means, continue doing it. Your lifting results will tell the rest of us if it works or not.
Having said that, if you’re looking to improve your lifting as much as possible, my suggestion is to learn and practice according to textbook technique and diverge only as it begins to happen naturally after you’ve reached a reasonable level of technical proficiency, such as lifting at the national championship level. Prior to this, in my often apparently offensive opinion, you’re just limiting your potential development. Conventional technique became such because it works. Be sure you have good reasons for rejecting longstanding conventional wisdom—novelty and fashion don’t fit that requirement. I’m willing to bet that if you’re struggling with poor snatch and clean technique, bending your arms prematurely isn’t going to solve the problem.
See more articles & videos like this in the Snatch & Clean Second Pull collection.

Joe
Funny I should come across this article...right after we went for a max hang clean today. I started intentionally doing this early arm bend after watching the latest 105 kilo champ pulling off a successful clean and jerk with it. Being anything but an elite lifter, I should have known better, and it's probably why I've un-PR'd my clean.

Thank you for your contributions, Greg. Sincerely!

Jan Dayleg
Testing to see if you will respond-- I have some questions about this topic. I know y'all are super busy so hoping to get a response!
Hi Jan - What can I help you with?