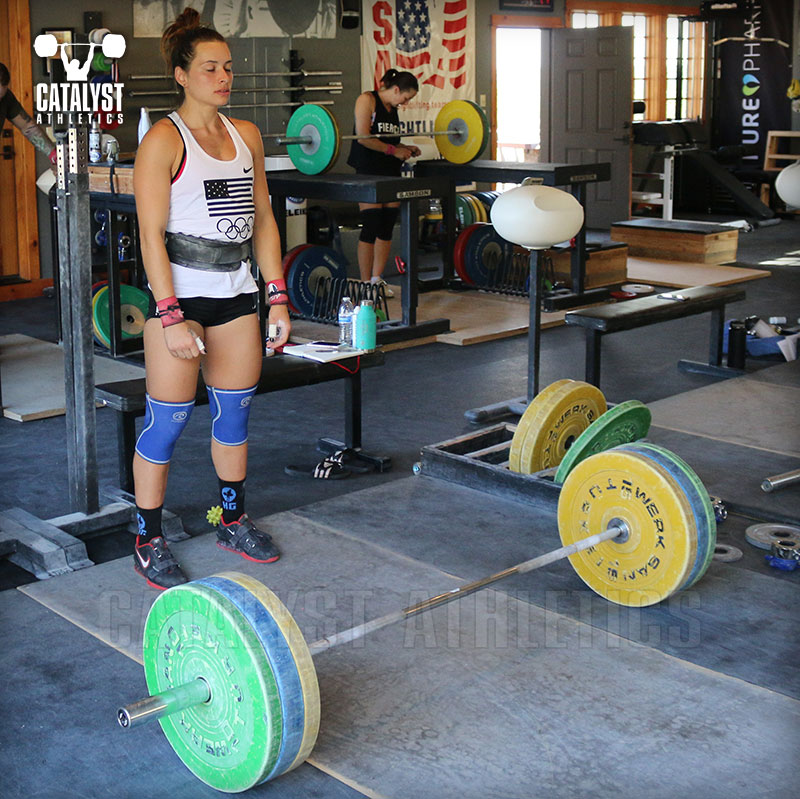 I seem to be having a lot of conversations lately with new/intermediate lifters who are discouraged because the weights they’re lifting are so far behind the people they’re comparing themselves to.

We all compare ourselves to other lifters in this sport. I think that’s natural, and there’s nothing wrong with it. But occasionally, it can be discouraging when our personal results always seem to lag behind.

You can very easily drive your enthusiasm into the toilet in weightlifting if you’re constantly thinking about other people who lift more than you. I’ve actually spoken with lifters who were thinking about quitting because they were convincing themselves there was no way they’d ever be able to match up with the level of competition they wanted to reach.

Here’s the thing… You know those people who lift a lot more weight than you? Believe it or not, there was a time when they were lifting the same little weights you’re lifting now. Contrary to what you might think, these studs didn’t pop out of the birth canal and start snatching 300 lbs on the hospital floor.

...there was a time when these Olympians were lifting the same little weights many of you are lifting now.

You want some proof? Okay, take a look at this. I went back and did a little research and came up with some numbers you’ll find interesting. I picked four US Olympians from the past, a couple of recent ones and a couple from the 90s. I’m going to give you their names and a few of their biggest accomplishments, and I’ll also give you some of their top career performances. BUT…then I’m going to show you some early meet results from each of these lifters, back before they hit the big time. I think you’ll notice that there was a time when these Olympians were lifting the same little weights many of you are lifting now.


So let’s address the white elephant in the room. You’re all looking at these numbers, saying to yourselves, “Those little weights are from when they were 16 years old. Of course they added 50-80 kg on each lift throughout their careers. They went from 16 years old to 27 and moved up 3-4 weight classes as they grew up. It’s normal to improve that much during that age span. And I’m 34 years old. I can’t expect the same progress as them because I didn’t start when I was a teenager, so this comparison doesn’t work.”

And here are my responses:

1. You’re absolutely right. If a lifter snatches 75 kg at 60 kg bodyweight as a teenager, and has phenomenal talent, increasing their snatch by 50-60 kilos by the time they’re 25 might be possible. If you’re snatching 75 kg and you’re 34 years old, you’re probably not going to eventually snatch 165 kg like Gough did. All true. HOWEVER, let’s say you’re not going to make as much progress as these legends did. Let’s say you’re only going to make half as much progress as them. Paul Fleschler had 75 kg of improvement on his snatch throughout this span of his career. Because you’re old, let’s say you’re only going to make around half as much progress as him (maybe 30 kilos). How good does 30 kilos of improvement look to you right now, or maybe even just 15-20? Think you’d be happy with it? Hell yes you would. If you’re currently snatching 70 kg, and I told you you’re going to eventually hit 90-100 if you train long enough, would that be good motivation? See what I mean? And I’m telling you something, I’ve been around weightlifting a long time and I can promise you…that kind of improvement isn’t out of the ordinary.

2. You might have some additional arguments to prove that this comparison doesn’t work. You might even be warming up the negative, contrary response you’re going to post to this article. Maybe you’re going to say, “These are the most talented athletes we’ve ever had, so their progress isn’t indicative of a normal person.” Or maybe it’s going to be, “It’s still unrealistic to expect even half as much progress as these athletes, if you’re starting at 40 or 50 years of age.”

Do you want to know what I have to say to that?

Great. Congratulations. You’re stretching your brain to come up with toughminded, resilient arguments to fight back against my suggestion that you should expect to make a lot of progress in your weightlifting career. I gave you some numbers to show that you’re going to get a lot better in this sport, and you battled back against me with everything you had.

Take a step back at this point and ask yourself a question. Do you think that’s how a champion thinks? Do you think you’re accomplishing anything by thinking like that? Somebody throws out a proposition that there’s some hope for you to add 20-30 kilos onto your top lifts, and you try to find holes in it, arguing that it’s not possible?

I knew Tommy Gough and Paul Fleschler pretty well, and I can guarantee you they didn’t think like that. I snatched 80 kg in my first meet and I progressed to 155 for a career best, and I sure as hell didn’t think like that. I can’t assure you 20-30 kilos of progress in this sport. But I can definitely assure you’re not going to make 20-30 kilos of progress if you don’t think you can do it.

This whole thing has to start with a fundamental belief on your part that it’s possible, that you’ve got what it takes inside to rise up the ladder and achieve much greater things than you started with. Stop thinking like a jackass and start thinking like a champion, and you might do something great someday.

Shawn
Hell, I'm 40 and I'm going for a 40-50kg increase. Gonna enjoy every kilo of it too.
Ari
Yes!!! Thank you, Greg. I didn't start in earnest until 43 (45 now) and I've added 21kg to my snatch mainly through focus on improving my technique. Still have a ways to go, but good coaching, your book and Matt's book, have all been incredible resources to help make that happen. Great stuff!
Misty
Great article...and exactly what I needed to hear...over and over again. :)
Roman Lombardi
I'm 47, and started two years ago. I don't want to lift heavy, I want to lift right. The rest will come. Matt, your book on Masters lifters helped me a lot. It got me the right perspective. The joke around our gym is that we are all just 5 years away from being decent weightlifters!!
Kassie Lesco
Thanks for writing this. It's exactly what I needed.
Lauren Nayman
Here's to massive gains this year! Maybe won't make Olympian progress, but I can definitely do a lot.