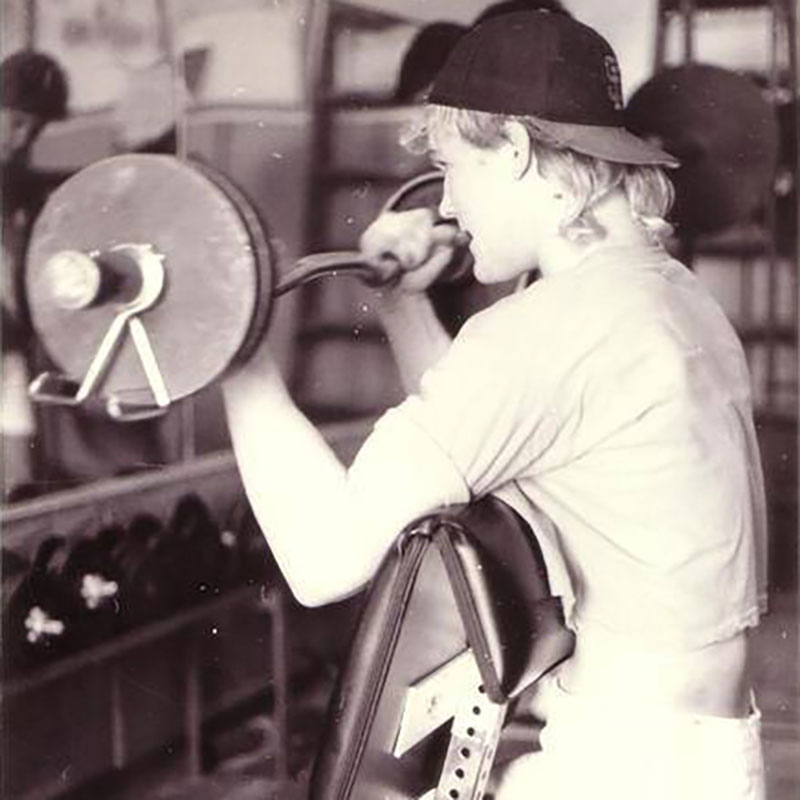 As I’ve talked about in past articles, when I was in High School, I wasn’t a particularly big guy. When I decided that lifting weights was something I wanted to do, I spent the first nine months in my bedroom lifting odd objects because my parents weren’t big fans of the idea so I was stuck using whatever I could find.

After Christmas break my sophomore year, I decided it was time to make my way to the high school weight room after school program. Being the always prepared guy I am, I made sure I had what I thought was the prerequisite gear, including a belt, gloves and some cotton straps. I summoned up the courage and ventured into what looked like from outside the 15-foot fences to be a prison yard. At the gate was Coach John Odom holding a clipboard. I had heard all the rumors about Coach Odom—everything from him being David Lee Roth’s personal bodyguard to taking second only to Mr. T in the Baddest Bouncer in the World contest. I never saw the footage, but apparently the final obstacle was a locked door which the contestant had to get through and then ring a bell—the story was that Coach Odom knocked it down with his head.

To say he was an imposing figure would be an understatement; the man was large with huge arms and a shaved head. You could see it in his eyes that when he decided to flip the switch you didn’t want to be in the same zip code. So he looks me up and down, knowing I’m nervous as hell, writes my name on a clipboard and then says, “Let me see those gloves real quick.” I hand them over thinking Man, coach digs my gloves; a second later he rips them in half, tosses them in the trash can and explains that gloves aren’t used in his weight room. So after the equipment issue is covered, he shows me what the schedule is and what lifts are done on what days and how to do them.

The weight club had a T-shirt, and at the time it was the coolest thing I had ever seen. It was white with Valhalla Weight Club on the front with a loaded bar below it; on the back was a giant flexed arm with the words dedication and determination surrounding it. All of the big guys would wear it around school and I figured you had to bench 500 pounds or flip over a car to get one, so I didn’t ask about it. Then one day I overheard another guy saying he was getting his next week. I asked how he earned it and he explained that if you showed up every day for two months straight, never missing a day, you would be allowed to buy one.

I was so excited. I remember thinking Two months? Hell, I love this stuff, I can do that easy. At that point, I was usually the first person in and the last to leave as it was. A few days later, I woke up sick as a dog with a fever and bodyaches that were crippling, coughing up a lung. I didn’t give a damn—for once in my life, I was going to drag myself to school just to be able to get in the weight room afterwards. A week later, I got much worse and developed walking pneumonia. My mom had ordered me to stay home, but as soon as the weight room opened up in the afternoon, I was there wheezing my way through a workout and rushing home before she got off work. Two months later, Coach came up to me and asked me my size and said it was $10 for the shirt. I handed over the cash, and you know what? I still have that damn shirt, and that was nearly 30 years ago. I was more excited about that shirt than the Varsity Letter I had earned.

Now the school year is coming to a close, and I’m not exactly flush with cash, so where was I going to train? I keep pushing the concern out of my mind and just push on. The last day of school comes and most normal people are fleeing the school like rats off a sinking ship, but I’m in the weight room doing one-arm bench rows by myself. In walks Coach Odom looking at me like I’m half stupid, holding a 3 x 5 card. He hands it to me and explains that it’s the address to his house and the code to his garage gym, and then tells me to go home and he will see me tomorrow.

He was the guy who taught me that you should earn things in life, not have them given to you, and that if you show up every damn day and put in the work, good things will happen. He also taught me that garage gyms are my absolute favorite places in the world to train, and for those two lessons I will never be able to thank him enough.  So yes, at Outlier Barbell we have platforms for lifters that have qualified for National meets, and yes, to buy a shirt you actually have to be a member. Maybe that sounds harsh to some, but to those who know what earning it is about seem to always understand.

Jonathan D.
Earned, never given. Love it!
sam
its not really a coaches place to destroy property. he should have just said to not bring the gloves next time.