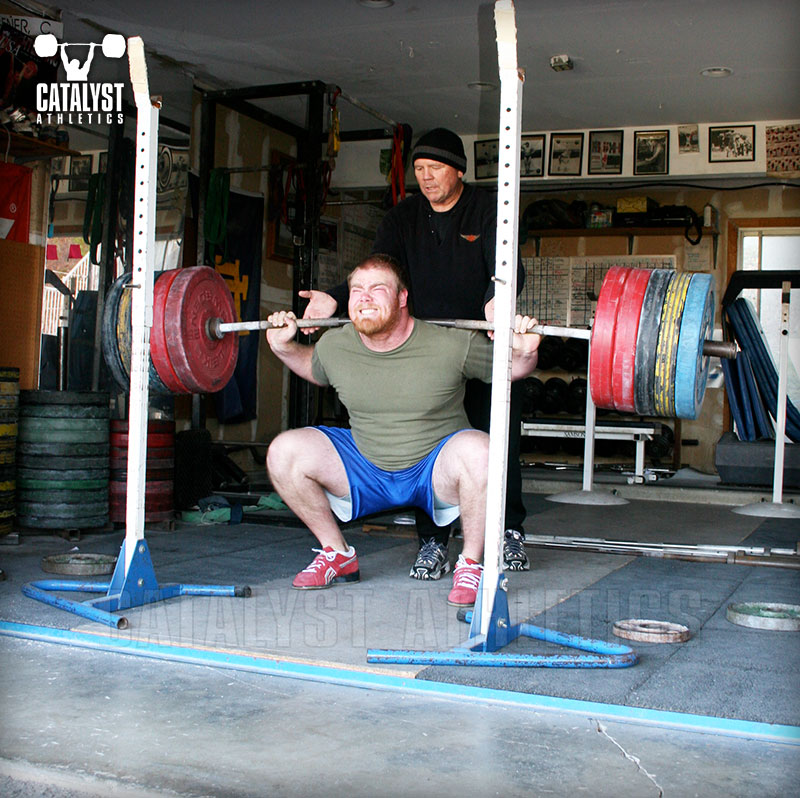 A while back, Greg wrote an article about the garage mentality in weightlifting. When I read it, lots of little pops and clicks started going off in my brain. So I decided to follow his article with something of my own. I have to talk about myself in the beginning so I can talk about you in the end.

I come from a garage background in weightlifting, you see. As Greg said, there was a time in this country when that’s basically all you had. Nowadays, it’s easy to find a place to train if you want to be an Olympic lifter. You have options. Back when I started, it wasn’t like that.

I was going to college in Flagstaff, Arizona in the early 90s. I was 20 years old. The strength coach at my university agreed to let me train in the weight room, which was the only place in the city that had bumper plates and platforms.

After a couple of frustrating years of no progress, it became clear to me that the only way I was going to make it to the top in the sport was by relocating to a place with an elite coach and a bunch of national/international lifters. There were really only a handful of programs in the United States that fit that description at the time.

I chose the Calpian Weightlifting Club in Washington, led by John Thrush. After talking with John on the phone and making the arrangements to join the team, I packed everything I owned into my car and drove north to chase the dream.

It’s been 24 years since I walked into the Calpian gym for the first time, and I can still remember it like it happened two hours ago. The gym was John’s garage. It wasn’t a palace, definitely nowhere near as fancy as the college weight room I had been training at before. There were six platforms with good bars, lots of bumpers, squat racks, and a few benches. That was it. No air conditioning in the summer, and a monstrous space heater that released clouds of awful fumes into the air during the winter. It was about as old-school and hardcore as you could ever hope to find.

Dean Goad won four national championships and competed in five Olympic Trials training in that garage. Melanie Roach went from the first workout of her life to an American record 113 kg C&J in the 53 kilo class training in that garage. For over 20 years, that garage cranked out lifters who established themselves in the top ranks of US weightlifting, winning junior and university national championships, competing at the Trials, making international teams, and eventually winning the National Team Championship in 2000. I was very fortunate to be a part of this era.

Now this is when we start to apply this to all of you.

There’s a special kind of toughness that comes from this environment. There was one night when the power went out at the gym because of a huge rainstorm. We opened the garage door, I pulled my car up to it and turned the headlights on, and that’s how we trained that evening. And nobody complained.

Nobody got their own platform, their own bar, or their own music. It was a small place and we all had to work together and share. If you got to the gym and somebody was already training on the platform you liked, you either A) jumped in and trained with them, or B) found another platform. Neither of those were a problem for anybody.

We were a team…a family. Sure, we had occasional squabbles and personality conflicts. But we worked them out in-house, and we stayed together.

When new people joined the gym, there was a clear understanding that they had to prove themselves if they wanted to be accepted as a part of the team. You proved yourself primarily through working hard and not being selfish. The group didn’t change for others. Others had to change for the group.

After the 2004 Trials, I moved back to Arizona to be closer to my parents as they grew older. But the garage mentality has never left me. It’s in my DNA now.

There’s a psychological hardness that stays with you when you come from a background like this. The garage is…a garage. It’s not the kind of perfect physical environment a lot of people visualize when they think about elite sport performance. When you train in a garage, you’re always roughing it. That daily roughing experience turns you into the kind of athlete who can get the job done when things aren’t perfect, which is a very valuable weapon in your life as a weightlifter, when things are almost never perfect and you’ve got an ongoing list of obstacles to deal with in your career.

Before you know it, you’re like a chunk of iron. Things can hit you, but they won’t make a dent. This is where you start to unlock the inner keys to success in this sport that have nothing to do with snatch technique or programming.

And you don’t have to train in an actual garage for all of this to apply to you. That’s the whole point here. Like we’re saying, it’s a mentality. It’s not about what’s inside four walls. It’s about what you’ve got between your ears.

I encourage all of you to develop this mentality in your own training. Become resilient. Harden up. Contribute to your group. And always get your work done, no matter what’s going on around you. If you need everything to be perfect and controlled, you’re not going to make it very far in weightlifting. It’s not about controlling what’s around you. It’s about controlling what’s inside you.

Best of luck to you all.

Harry Thomas
I most definitely concur - I can't remember the exact quote, but it goes something like 'train your mind and your body will follow'; bringing a tough and strong mentality to the gym with you can almost guarantee results.
Greg Walsh/ Wolf Brigade
What an absolutely excellent story and article, Matt. Thank you man. I will be passing this on today.
Jermiane Joiner
Awesome post bro.
Susan Friend
I love this. If you only train on perfect days, you'll never train. The challenge is to push through the imperfect circumstances and make it happen anyway.
Benjamin G.
Niice

Now stop reading and get your work done.

Meredith Stranges
Excellent article, thanks for sharing your thoughts on this.
John Darrenkamp/The Garage
Love the article. Loved your book. I’m a Masters weightlifter and have only been in the sport shy of 2 years. I’m 47. I train in my basement. Then with a coach once a week at...theGarage (since their gym actually started in a Garage they’ve kept the name) anyway, I agree with the “...nobody cares” how do you differentiate between pushing through and letting your body rest when it feels like it needs one? It’s what I struggle with. Thanks
Jeff Reinardy
I love this article. I started in a garage gym in the 1980's. I was a scrawny kid who wanted to get stronger. During the winter in MN when the temp in the garage hit 30 the shirts came off. You had to wear gloves not to cold burn your hands on the bars and in the summer they rusted with the heat and humidity. The atmosphere was fantastic. A strange kind of toughness that we enjoyed. All who stayed became very good powerlifters and more importantly we has the best times of our lives. Now I am a collegiate strength coach with a pretty nice facility, but I long for the days of a snow drift coming through the door, AC/DC cranked on the stereo, and a heavy squat session with those guys. Life does not get any better than that!
Justin Escalante’
Love it! I train in my garage 90% of the time and take pride in it. Damn, it’s tough sometimes though with no one yelling at you, but I still push. Thank you, Matt!