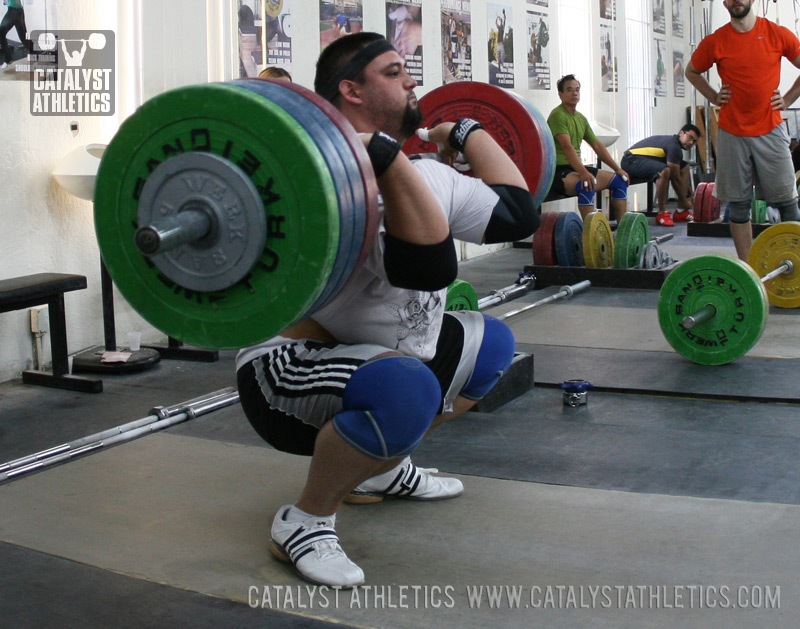 I’ve lifted in two meets over the last four weeks. Normally I would never compete twice in such a short time span, but I’m getting knee surgery in July and I wanted to have as much fun as possible before I’m out of commission for a while. Both of them went really well, and I lifted the biggest weights I’ve hit since I turned forty.

The first one was the IronFest on May 4th, held in Chandler, AZ at East Valley CrossFit. The meet director was August Schmidt, who is the owner of EVCF and a friend of mine for years. I coach, emcee, or lift at every meet he runs. The second one was the WarriorZ Open in Elk Grove, CA on June 1st. Charlie and Micha Zamora, the husband-wife owners of WarriorZ CrossFit, ran it along with veteran lifter and coach Kathy Redcher-Bowling. I’ve known Kathy since the 90s, but this was the first time I’ve met the Zamoras.

Both of these were excellent meets. The organization was sharp, and everybody involved in running them clearly put in the effort during the preparation stage to make sure game time was smooth and efficient. Also, the level of competition was hellacious. There were several national (and international) level athletes putting some hefty barbells over their heads, with big audiences that were fired up and rowdy. My appreciation goes out to the people who ran these shows, and a few ideas came to my mind afterwards.

Most people don’t know this, but I’m a little obsessed with keeping records, statistics, writing down numbers, etc. I actually started a notebook of all my meet results back in the beginning of my career, and I’ve continued updating it for twenty-five years. The WarriorZ Open was the 106th weightlifting contest I’ve competed in.

When I decided to write this article, I asked myself, “What is the best advice I could share with everybody about competing?” After building up so much experience over the years, I’ve learned an awful lot. But one particular idea stands out in my mind, so here it is.

If you’re an athlete, one of the biggest things you’re going to have to do in your competitive career is develop the ability to overcome the various surprises, distractions, and “not exactly the way you want it to be” conditions that will pop up at weightlifting meets. If you’ve ever competed, you probably learned pretty quickly that the set-up and environment at meets is often drastically different from the normal comfort zone you have in your gym. You never really know what you’re going to encounter when you show up at these things, and the most valuable lesson you can learn is that it’s YOUR RESPONSIBILITY as an athlete to adapt and keep your mental focus sharp…regardless of any curveballs that come your way.

In other words, there’s a pretty good chance you’re going to compete in a meet someday where you have to deal with one (or all) of these things:

- The warm-up room is really crowded
- The bars in the warm-up room are a lot different from the one you train on
- It’s really hot
- It’s really cold
- The platforms are rickety, slick, small, uneven, etc.
- It’s insanely noisy
- People are getting in your way and pissing you off
- There’s a baby in the audience and the damn thing won’t shut up
- It’s a big meet and you have to wait a LONG time before you get to lift

And a thousand other unexpected variables that might occur…

I’m going to say something very blunt here, and some of you might not like it. If you let these things throw off your game, you’re not mentally tough enough. If you lift like crap, it’s not because of the bar, the platform, the temperature, the noise, the cramped space, or any of the other distractions that popped up. You lifted like crap because you weren’t strong enough to overcome those things. If you’re running around pointing fingers after a bad performance, you’re the one with the problem.

I’ve known athletes over the years who make a habit of this. As soon as things get rough, they start putting their excuses together. Instead of battling through adversity, they give themselves permission to have a bad performance, and they think it’s okay because they’ve got something to blame it on.

When you’re standing in front of the bar on the competition platform, getting ready to attempt your first snatch, you can’t look out at the crowd and announce, “Listen! If I miss this snatch, it’s not my fault. The bars in the warm-up room aren’t very good. Okay?” At that moment, none of the curveballs matter anymore. The only thing that matters when you’re on the platform is whether or not you’re going to get your job done. If you don’t get it done, it’s….your….fault. Plain and simple.

This is how you have to look at it if you’re a competitive lifter. Even if there are some disastrous obstacles at a meet that might realistically be bad enough to damage your performance, you should STILL take total responsibility for what happens because you have to train yourself to believe that the only thing that can control your results is the strength of your own mind.

Brothers and sisters, this is one of the best tips I can give you. And now that you’ve read this, please don’t think I’m hinting that there were shoddy conditions at those two meets I competed in. East Valley and WarriorZ CrossFit both ran excellent contests. I loved both of them and I would totally go back to their meets again in the future. August, Charlie and Micha, and Kathy did great jobs. These people are solid gold, because one of the best things you can have in weightlifting is somebody in your area who has the energy and enthusiasm to put on quality contests.

I’m writing about your responsibility to adapt simply because it’s one of the main things that stands out in my mind when I look at all the years I’ve been doing this. It basically goes back to a Nicu Vlad quote I used in one of my first Performance Menu articles…

Greg Everett
Great article. I would emphasize the gratitude for those who host meets and remind all of those who whine about conditions that they don't have a leg to stand on until they're also hosting meets and know how much work it is.
Michael Young
I would second Matt on the Warrior Z competition. It was actually my first meet and though I have nothing to compare it to, I thought it was ran very smoothly and maintained a fun atmosphere throughout.

One thing that stood out the most to me was the camaraderie among the lifters. It was pretty cool to see them all BSing and swapping war stories before their warm-ups. Another was level of the lifters. There were so many there that have been such an inspiration to me via their videos. I train at home, so I felt like I was surrounded by so many of my "coaches". There were many brains I would have loved to pick, but I was content enough to just be a fly on the wall.

Needless to say, as a newb I have been following Catalyst Athletics religiously. The demo videos have been priceless in helping me develop as a lifter, and the articles from the Good Reverend Everett and Deacon Foreman are always educational and entertaining. Sacred text I tell you. As you could imagine any good disciple would do, I of course had to introduce myself to Matt. To which he directly told me to go F myself. I kid. He couldn't have been friendlier. I was actually like a deer in the headlights when I got there, not knowing what to expect, chatting with Matt calmed me down quite a bit, so thanks Matt… Another great article by the way.

beth jensen
Perfectly stated Matt....I value hosting competitions so much. They have given us at TCA opportunities to care about creating a space for athletes to attempt their best. And because I know things can and will go off kilter at times, I am better prepared when I compete to deal with obstacles. Thank you
Bob Takano
Right on, Matt. The ability to adapt is what separates the victors from the disgruntled. Athletes can decide which group they'd like to join.
Danny
Very nice, Matt. When people complain about the platform, weight brands not matching, collars or no collars, etc it drives me nuts. .The less you worry about these things, and more you worry about making lifts the better off you'll be!

Also, it was nice to chat and compete with you in Elk Grove. Keep up the good work