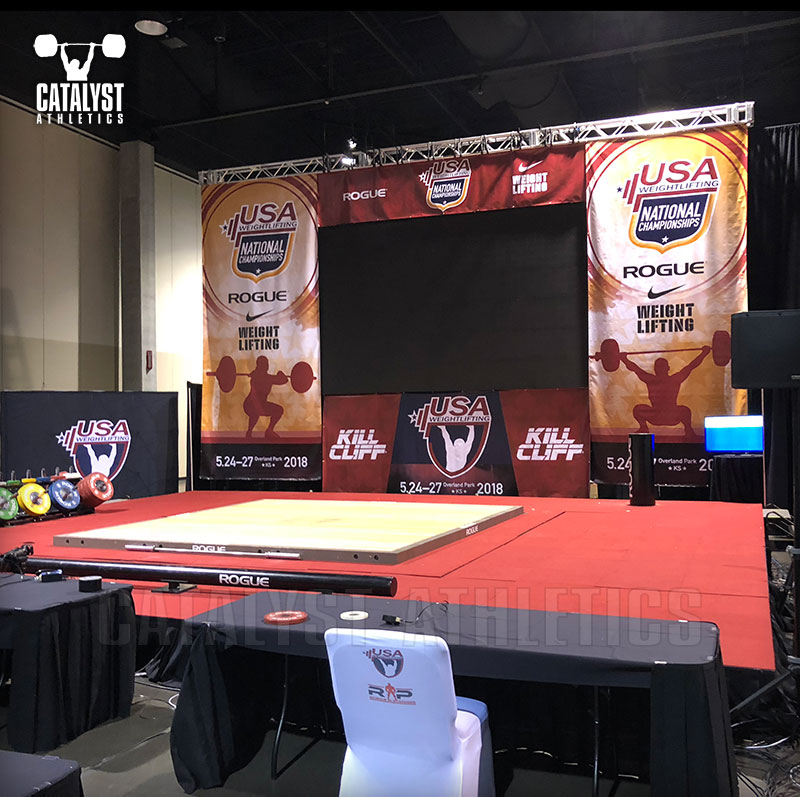 Weightlifting meets look like Woodstock now. The Masters World Championship is getting 900+ entries. The American Open Series 3 meet in Las Vegas has 1,600+ entries. Small local meets are capping entries at 60 lifters and their online registrations are filling up in minutes. And most of these lifters show up to the meet with their coach, boyfriend/girlfriend, personal photographer, and five CrossFit buddies who all want to be in the warmup room.

Competing in these shindigs has gotten tricky, my friends. I’ve seen lots and lots of lifters in recent years who paid the price (bombouts) because they couldn’t deal with the curveballs that come with big meets like this. So… I’d like to offer some thoughts about the most frequent challenges you’ll encounter at these mega-meets, along with a few suggestions that might keep you from joining the casualty list.

Many meets nowadays have three or four competition platforms running simultaneously. This means you’re going to be on the platform attempting your big lifts while other lifters are doing the same thing to your left and right… at the same time. In some cases, there will be big curtains or dividers between the platforms to give some privacy. But other times, there won’t be anything, and the platforms might be close together. You could run into a situation where you’re onstage attempting the biggest snatch of your life, and somebody else is doing the same thing sixteen feet to your left.

Suggestion 1: Don’t worry about it: Just trust me, this will bother you a lot less than you think. I’ve been in situations like this as an athlete and coach, and it didn’t make a bit of difference. If you ask around and talk to other lifters who have competed like this, you’ll usually hear the same response. It’s one of those things that sounds like it’s going to be a big problem… but it isn’t.

When you compete in these big meets, you’ll probably be in a session with a bunch of people who lift almost exactly the same weights as you. That means you’ll go out there for your opening attempt at 100 kg, make the lift, come back in the warmup room, and then realize there are 11 other lifters opening at 100 kg. So you’re going to have to wait at least 11 attempts until you go out there for your second attempt, which could take 15 minutes or more. On top of that, some numbnuts is always going to bomb out, so now it’s more like 18 attempts… maybe with a few two-minute clocks. This is a crappy situation for a lifter, and it’s pretty frequent at these meets.

Suggestion 1: Do Some Waves in Training: Wave training is when you work up to a heavy weight, and then go back down to something lighter and work your way up again. For example, let’s say we’ve got an 80 kg snatcher who’s doing wave training. The workout progression might look like this: warm up to 65 kg like normal, then go 68x1, 71x1, 74x1, 77x1, 71x1, 74x1, 77x1. When I trained with the Calpians, we called this “segment training.” It’s good practice because if you’re in a situation like I described above, with a 15-minute wait between attempts, you’re going to have to go back in the warmup room and do some more light warmup lifts to stay ready while you’re waiting. Practicing waves in training is the best way to simulate it.


Challenge 3: Packed Warmup Rooms: Needless to say, jammed-to-capacity warmup rooms are just a basic part of the environment at mega-meets. You have to share warmup platforms with multiple people, with hovering and commotion all around you. Many of the people in the room won’t have strong meet etiquette skills, so they’ll do stupid (or simply unaware) things that screw up the collective mojo. Distractions are everywhere. It’s noisy as hell. Your field of vision while you’re doing your lifts is almost always jumbled. People steal your chair.

Suggestion 1: Train For It: Intentionally force yourself not to be a control freak in the gym every day. Don’t fuss over the music that’s playing. Don’t fuss over how hot/cold it is. Move around to different platforms and use different bars. Don’t ask people to accommodate you. There’s nothing weaker than a weightlifter who needs to have their environment “just right” when training. That’s got bombout written all over it.


Obviously, I was being sassy with the “don’t be a b***h” part. But honesty, that’s probably the most sincere advice I can give you. When you get to big meets, you’re surrounded by people who are just as good as you. Do you want to know who always wins in those situations? The one who doesn’t flinch. I’ve competed in over 100 meets, half of them national-level or higher, and I can promise you one thing… this sport all comes down to who doesn’t flinch.