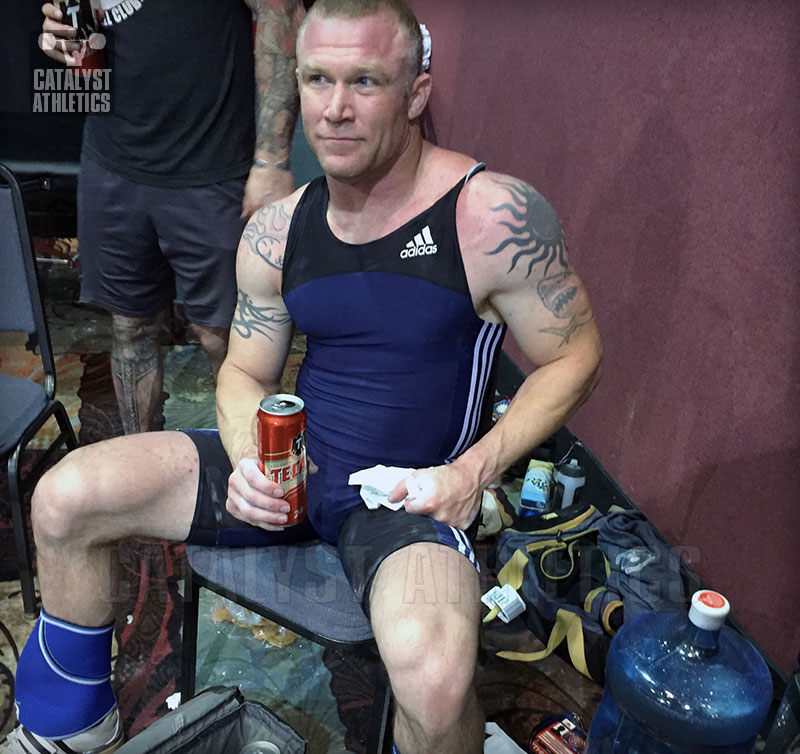 A few weeks ago Matt Foreman and I were teaching a weightlifting seminar geared toward masters and at the end we had a little Q & A so people could ask Matt about his super secret diet tricks and why I hate the use of NSAIDs (This is complete sarcasm). However, we did talk about competing. When asked about it, Matt actually surprised me a bit by saying, Hey, if you want to compete, go for it, but that it wasn't necessarily a deal breaker for him, whereas I took the opposite stance by stating that you absolutely should be competing.

Now a couple weeks removed from that moment I have been thinking about why I said it and why I feel that way. A majority of the articles I write are done in a list style, so this will be no different. I obviously know what all three of my readers like. So here are my 5 reasons I think you should compete.

1. It gives you something to train and prepare for

I love movies like Vision Quest, Warrior, and any of the Rocky movies that take you along for the process of getting ready for that big day. Competing and taking it seriously allows one to get the mindset that no matter what, you are going to train your ass off, watch what you eat and do well on meet day because you have put in the time over a few months.

I had a friend a few years back that started weightlifting, and after a few months he got better. He wasn't great by any stretch of the imagination—he wasn't even good, but he stuck with it. I was talking to him one day and he said he wanted to do a meet in 6 months and at the time he weighed a pretty chunky 82kg. He firmly stated he wanted to compete in the 77kg class. Over the next 6 months he was driven—the guy never missed a day of training, completely turned his diet around and became much better in both of the lifts. Meet day shows up, he weighs in at 76.5, goes 4 for 6 and has the time of his life. Did he medal? Nope, not even close, but he went out on that platform like it was the Olympics and attacked that bar every time. Not only did it give him the opportunity to compete in a meet to be able to learn and share that experience, but also, more importantly in my opinion, it gave him a goal—something to shoot for.

2. It gets you out of your comfort zone

A vast majority of the people who read this are probably not going to make the World team anytime soon, and that's fine considering I can count the people on 2 hands that I personally know who did. So let's talk about us, you, me, and what I like to call the "journeyman's club" of weightlifters. We all have jobs, school, families and lives outside of weightlifting. Weightlifting doesn't pay our bills; we actually work to allow us to enjoy this sport. Well that and pay our mortgage, but mostly to lift weights.

Rarely in life do you get to challenge yourself like you do at a weightlifting meet. It's literally just you out there in front of a fair amount of people and you're completely exposed. All eyes are on you and for that time its all on you. How often do you get that kind of opportunity in life to get that kind of stressor? For some people, just wearing a singlet is stressful enough, let alone wearing it front of a hundred people. Some stress is good for you, and I believe those moments can make a huge positive difference in peoples lives.

3. It makes you a tougher lifter

You hear all of the time that gym lifting and meet lifting are two different things—well, it’s true. Hitting a big lift in the gym is impressive no doubt, but for the most part it’s done on your terms, meaning that you probably didn’t have to wait to be called up, you were wearing what you wanted and you weren’t on a clock. I believe it makes you a better lifter because most meets aren’t in ideal locations and you have to toughen up a bit because you aren’t warming up on your platform or your bar, hunting change plates between attempts is stressful, and the whole experience can be exhausting.

About a month or so ago I was coaching a few masters women at a local meet. Weigh in was at 0500 in the morning, and they were lifting basically in a parking lot underneath a tent at 0700 on a pretty brisk Saturday morning. All three of them did great, but that’s some serious fortitude to want and to do that. Now the next meet they do probably wont have the same set up, so they have been through a rough one and the next will be a bit easier for them mentally and physically.

4. Your lifts will get better

At Outlier Barbell we have a PR board; however, I only let members who have competed keep their numbers up there and you have to compete once a year or your numbers come down. Now I don’t have any statistical data to back this up, but I’m willing to bet that lifters that compete on a regular basis tend to improve more frequently than “recreational” lifters. If you are competing 1-2 times a year, your program should be written in a way to allow to peak for those meets, thus allowing more opportunity for success. Competitive weightlifters tend to make it to training more frequently and have a higher sense of accountability. A huge additional point to this is if you are even thinking about becoming a coach you need to compete—you need to be able to relate to what your weightlifters are going through.

5. The experience of it

You need to be a part of it just once, to see how hectic it gets in the back room, to be in line for weigh-ins and see everyone sizing each other up and trying to break their necks to hear what they are putting for openers. To hear your name called out and the words “good lift” behind it. It’s an awesome time that for all of those weeks of training goes by rather quickly.  Get pictures of it, get video of all your lifts so when you’re some old grandma or grandpa and one of your grandchildren is watching the 2040 Olympics with you, you can say, “Yeah I competed. Want to see the pictures of your grandma putting away a 60k snatch?”

The last few days before a meet, I hate. When I get to the venue, I hate it. I hate all of it until I get cut loose on the warm-up platform; then I love it. I love hearing my name get called, I love sitting on deck looking at the other lifters, I love the dumb-ass conversations Greg and I have while I’m waiting to go, and I sure as hell love that first beer I get after 12 weeks of not having one. Please go compete. Just do it once so at least you can know what the feeling is like.

Gary Echternacht
If your primary goal in life is to maximize your numbers, then I think you must compete for all the reasons given. But what if that isn't your primary goal? What if your primary goal is to get stronger for another sport, to improve your overall fitness, or to just enjoy the movements used in weightlifting training? In that case I'm with Matt.
Mike Gray
Gary,

Who wouldn't want to "maximize their numbers" as you put it?

Gary Echternacht
The shot putters I used to coach trained like weightlifters in that they did lots of snatches, clean and jerks, front and back squats, and presses. It was the reason they got to be good. But their priority was throwing the shot. That's what they cared most about. I tried talking them into going to a meet once, but their interest was zero.

Weightlifting doesn't have to be an end unto itself. It can be a very useful tool for achieving another goal however.

Uyen Do
That's my new favourite article!
Lynn
Great little piece. I am a relatively new master's athlete (54 years old) and I compete for all of the reasons you mention. It's 'character building' and just plain good for you too.