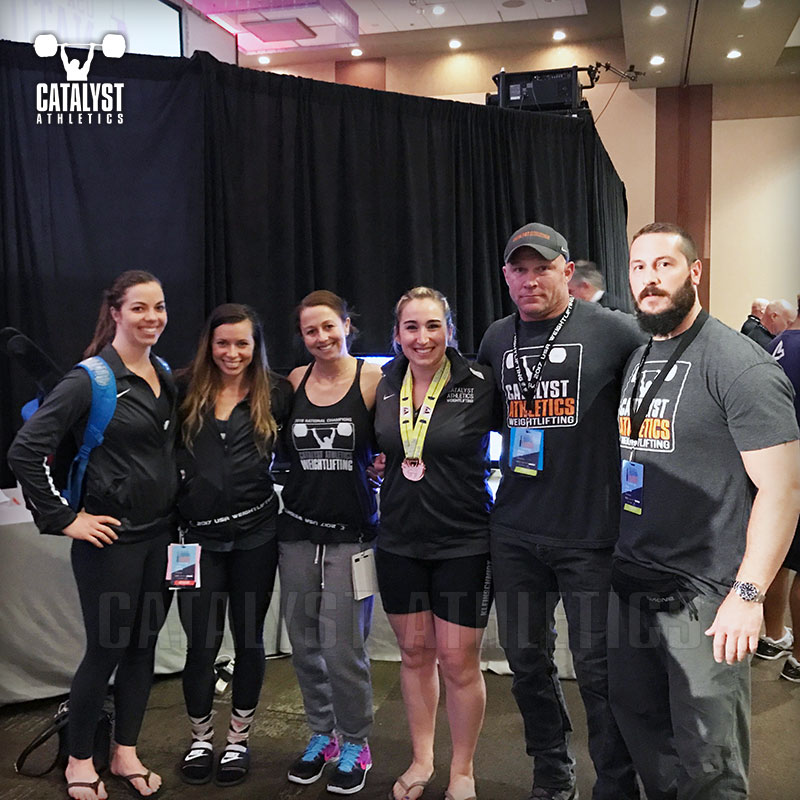 See more articles & videos like this in the Weightlifting Competition Performance collection.
The 2017 National Championships just wrapped up in Chicago last weekend, and since I skipped writing an article for the week because of it, I figured I’d better write an article about it as penance. The following are some lessons I think are important for anyone coaching or competing (or planning to) at the national level based on my experiences at these meets, and in particular, the most recent ones.

In local meets, the attempts in a given session are typically spread out pretty significantly. This makes it relatively easy to count attempts and warm your lifter up. Increasingly at national meets, with the growing number of competitive lifters, more attempts are closer together, meaning that slight changes can make large differences in the timing of your warm-up. For example, if your lifter is opening at 82, and there are 4 lifters opening at 78, you’re probably counting 2 attempts for each of those 4 lifters, giving you 8 total, and probably even padding it another 1-2 in case of misses and repeats. But what if 3 of them bump their openers to 80 or 81, the remaining 78 jumps to 82 for her second attempt, and suddenly you have half as many lifts left?

It seems increasingly common for coaches to put in openers lower than they intend to do when it’s unnecessary. When you’re in the mix for medals or teams, this is often a sensible strategy. When you’re rounding up the bottom of the C session, it’s not doing anything but making everyone else’s lives more complicated and stressful. I’ve seen coaches jockeying for 23rd place—not much surprises me anymore. If you're genuinely unsure of what your lifter will be capable of, e.g. first time competing, coming back after an injury, lower weight class, etc., putting in a conservative opener and adjusting up if appropriate makes sense as well.

Also seemingly more common is coaches increasing attempt weights after misses. Apparently no one is capable of making a lift after a 2-minute clock anymore, so coaches are desperately trying to buy more time—in my experience, this is rarely any more effective than just using up your 2-minute clock However, if increasing 1-2kg moves you behind a few other lifters rather than just increasing the rest by the time it takes to make the weight change(s), it may be worth it.

The point is, be prepared for sudden changes—either having to accelerate or decelerate the warm-up. Have a plan before you need it regarding what you’re going to do in either case so you’re not scrambling last second. For example, if you have extra time, are you going to repeat the last warm-up weight? Are you just going to sit and wait? Are you going to take a lighter weight or partial lift to stay warm while you wait longer than expected for the next warm-up lift? Or if you lose time, are you going to skip a warm-up and adjust the remaining? Are you going to take a lift every 2 attempts instead of every 3? Have at least a basic idea so you don’t panic.

At national meets, the availability of appropriate food and the proximity of the venue to your hotel room can vary considerably. If you’re lucky, the venue is attached to your hotel and is a quick walk, and that hotel has a number of good food options. If you’re unlucky, you’re staying a 15-minute drive away from the venue and your hotel has no food at all.

The day before you lift, make sure you have a plan in place for what’s going to happen from your weigh-in until the time you arrive in the warm-up room. Have food prepared and packed ahead of time as needed, make sure your transportation is sorted out if necessary, and triple-check your bag(s) for everything you’re going to need. You don’t want to be running back to your room because you only packed one shoe, or forgot your credential and can’t weigh in.


Get Out of the Way

This past National Championships had a pretty snug warm-up room. The platforms were extremely close to each other, which made navigating the room to get to the marshal’s table and back a challenge. These kinds of situations are exacerbated when everyone moves in—leaving bags, drinks, and everything else they brought right in the limited and small pathways that do exist. If you don’t want people walking across your platform, give them an alternate route.

Worse, never before have I seen so many people camped out in front of the marshal’s table and scoreboard, very few of whom were counting attempts or making changes. On top of that, a number of people insisted on standing 16” away from the scoreboard for extended periods of time—if you’re waiting to make a change with the marshal, stand by that table, or better yet, kneel. Don’t obscure the thing that everyone else needs to see because you’re too lazy or oblivious to take three steps to your right.


Know How To Do Stuff

The competition process is pretty complex, but it runs smoothly if coaches know what they need to do. A couple important things to know:

Never have I seen so many lifters with camera crews in a warm-up room as I did at this last Nationals. You’d have thought it was a Kardashian-Jenner family reunion. Listen, I get it—you’re pumped as fuck to be at the National Championships, and you have an Instagram account to keep healthy. But maybe let’s take a deep breath and remind ourselves why we’re there—to compete in the sport of weightlifting. If what you’re doing is getting in the way of that—or worse, getting in the way of others trying to do that—you need to reevaluate your plan.

Our lifters nearly always have a full complement of coaches and teammates in the back room with them. The difference is that we know how to stay out of the way, and we know what the priority is. If your bros can get footage of you while being unobtrusive, then by all means, make your blockbuster (but you’d better make lifts too). If your camera guy is continually in everyone’s way and neither of you cares, don’t be surprised when he/she gets stepped on and pushed out of the way unremorselessly, and your shot gets ruined.

So many new lifters are coming onto the scene acting like the world knows who they are and owes them something. I’m here to assure you that we absolutely have no idea who you are and don’t care. If you’re new and you make a splash because you make big lifts, we’ll remember you, and you’ll deserve the recognition and credit you receive. If you make a splash because you’re an asshole, throwing tantrums on the platform or in the warm-up room, causing problems because your gang is getting in everyone’s way, talking shit about established lifters because you think you’re going to come out of nowhere and beat them even though you end up 30kg behind, you will in fact be remembered—and you’ll forever be disliked and not respected no matter how good of a lifter you become in the future. Being a great lifter and being respectful and respectable are not mutually exclusive. You can’t guarantee you’ll ever be the former, but the latter is 100% within your control.

The theme here is pretty simple and obvious—be prepared before you get there. There are a lot of easily-accessible resources, from our website to the USA Weightlifting website (yes, I know, it’s hard to navigate—you can figure it out) that you can use to get ahead of the game. Lately, Danny Camargo has been doing a talk at the start of these meets (Thursday afternoon) giving new lifters and coaches a lot of the information they need. You have no excuse to be totally clueless (no one expects you to know everything, but put some effort into it).

Do your homework before the meet and you’ll ensure you and/or your athlete has the best possible experience and performance, and no one hates you at the end of the weekend.

Michael Hull
Do you have a printable version of this article. I took my daughter to Youth Nationals last year and what you described happen to us. We are going to Atlanta in June. This is a great resource. Thank you
Michael - You should be able to print it directly from the site if you would like. You should even be able to pull it up on your mobile device as well so you can have it on hand.