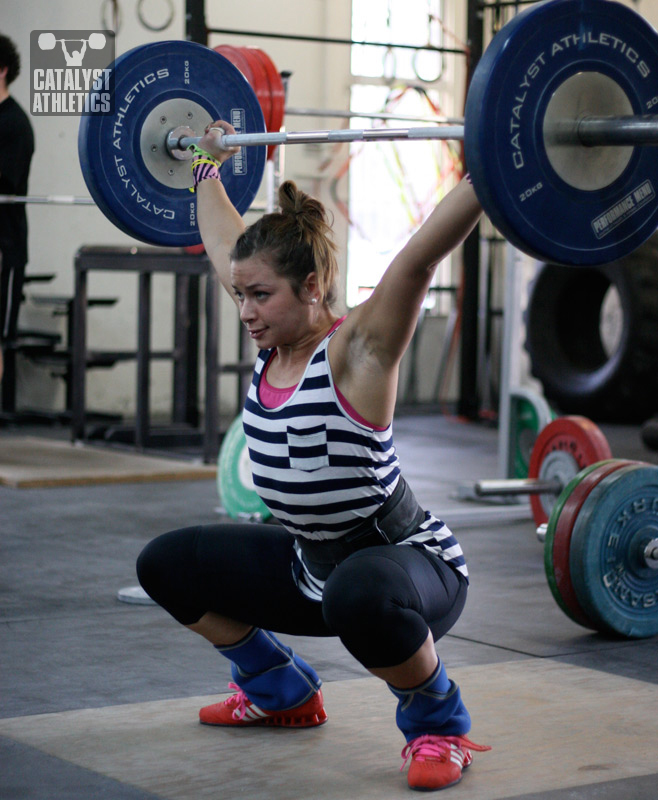 “Uh, odds are they are probably basic white, cotton, underpants. But I sort of think well maybe they're silk panties, maybe it's a thong. Maybe it's something really cool that I don't even know about. You know, and uh, and I started feeling... what? What I thought we were in the trust tree in the nest, were we not?” – Frank Ricard (Will Ferrell)

I have a crazy love affair with weightlifting.  I didn’t mean for it to happen, it just sort of did.   It all started with traditional college strength & conditioning for my (then) sport, Softball.  After softball, since I loved “fitness” and lifting weights so much I trained for a figure competition because I didn’t know what else there was at the time.  Then I found CrossFit.  At first, I thought this was my final destination since there was so much heavy lifting in the form of squats and Olympic lifts, not to mention all the metcons were very short AND there were actual competitions.  As time passed, however, the weights in CrossFit became lighter, metcons longer (neither of which brought me joy), and I was no longer making strength gains.  But then, as most love stories go, right when I least expected it, there was weightlifting right there in front of me.  It had been there all along actually, and I was finally opening my eyes.

I’ve fallen head over heels for it.  I haven’t ever felt this way for a sport before.  I don’t mean to break any softball player’s hearts out there but it’s true.  I just love getting stronger, and more powerful, and learning patterns, and refining precision.   It’s not just a physical puzzle but a mental one as well.  When I go to sleep at night I imagine the lifts; I envision digging my heels into the ground, popping the bar right into the crease of my hips, punching up against it as I settle deep into the hole-like dominos- one part leads to the next and so on, and it has to be just right.

The thing I love the most is that I can trust weightlifting.  If I add my weight each week, I will get stronger.  If I get the parts right, I will make the lift.  If I put in focused, quality time, I will get better.   And if the parts aren’t right, or I haven’t pushed the weight, I will miss the lift.   It’s as simple as that.  The bar will never lie to me.  The bar will only tell me the truth.

Have I gone too far with this analogy?  I thought we were in the trust tree in the nest, were we not?
More Feelings, More trust. That, Plus Adrenaline

One of the things I have enjoyed the most about weightlifting is the art of the competition itself.  In the heat of competition most of us get that sudden “fight or flight” rush, which makes sense considering sports are basically an artificial substitute for natural competition.   Some sports psychologists view competition as an innate biological trait which coexists along with the urge for survival.  In my sports experience, this is usually something I feed off of.

In softball, as a pitcher, I thrived off of the girls in the opposing dugout working together to try and beat me.  Fans who cheered against me in the stands only drove me to pitch harder, spin the ball faster making it break hard on the hands of the hitter or drop out from below their bat.  The tougher the situation with runners on base, the louder the stadium, the more the game was on the line, the better for me.

In CrossFit I fed off of a crowd yelling at me to go faster or that someone was on my tail.  The tougher my competitors were, the harder I pushed.  The more my heart fluttered before the clock started, the more my animal instinct took over and thus the faster I went.  Bottom line, in both of my previous “sports” the more adrenaline I had pumping through my veins, the better off I was.

Sure, every once in a while the “flight” option can get the best of you.  That’s just called choking.

Weightlifting, however, is quite different.  It is simple in that the game is to lift heavier weight than your competitors.  It is beautiful, like a dance, in the way the body moves and parts must flow; Animalistic, in that you must dig deep within yourself for the raw intensity needed to lift such heavy loads.  It’s a yin and yang of primal aggression and modern sophistication all wrapped into one moment.

In weightlifting competition there is no game unfolding or clock ticking where the winner is the one who finishes first.  There is no time to make up for errors or teammates to lean on for a good performance if your own isn’t on par that day.  There are no crowds of loud people yelling to go faster or opportunities to play defense.  It is simply you.  You get called to the platform by the announcer.  The crowd silences.  The lights shine.   But the adrenaline remains.   Where do you put those nerves?  How do you quiet those butterflies enough to dispose of any physical jitters that will compromise the precision in your opening lift?  And how do you do so without becoming so relaxed you don’t approach the bar with enough aggression?

Every time I do a meet, I build a little more.  I start to trust the pattern and the information I’ve gathered from previous experiences.  I trust my program and my coach.  I trust that even though I’d been beat up in my training for weeks or months prior, that after a taper I will come back stronger.  I trust that I’ve been working hard, making my weights, and bettering my technique.

Call It What You Want

Once it’s go time and the butterflies get going, I make sure to label them appropriately.  A great coach once said to me, “You’re the one who put’s the labels on your nerves.  If you’ve been cutting corners or slacking off then by all means, call it nervous.  But if you’ve been training hard and putting in the work then it should be called excited.”  It is a comment that has stuck with me for a long time and when I get ready to compete that’s exactly how I see it.

As I take my attempts in the warm up room and hear my name being called on deck, I feel my stomach flutter.  I think about how much I trust the experiences I’ve accumulated thus far; my coach, my program, and the work I’ve been putting it.  That’s when I take a big deep breath,  and as I let it out I feel the butterflies compress to the middle of my core and I remind myself of how excited I am to go lift that heavy ass weight.

And each time I get a little better.

Matt Foreman
YOU'RE MY BOY, BLUE!!
Beanie
Six weeks ago Abdul here had a one way ticket to an arranged marriage with a broad he never met in Bangladesh. Now he's crushing ass every Thursday night at our mixers.

Other Aimee
JFH is the cat's pajamas.
Jacqueline Janet
I love adrenaline
Kjell
Great article! I can't waite till I'm strong enough to compete.
Eddie
Well written...when you get done lifting become a famous author!
Kimi
wow! I love your writing as well as your lifting!!!
Jed Harris
Jocelyn-
Really inspirational and well written! Timely words, especially for Masters lifters like me.
P.S. Enjoyed watching you lift at the Seniors!

Adrienne
I really enjoy your writing and passion for lifting. Please keep writing it's inspiring!