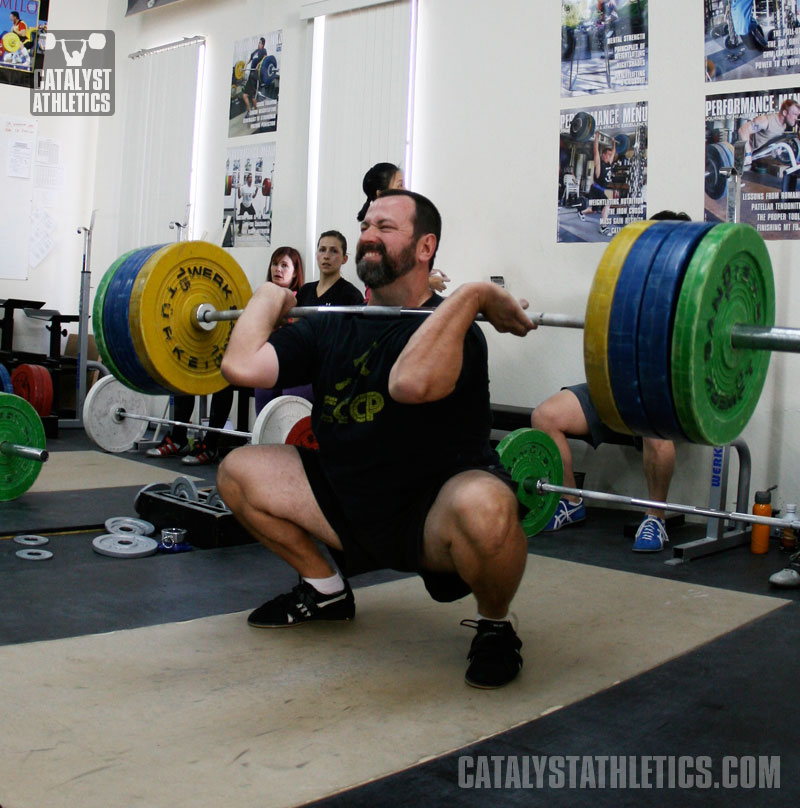 When I was 20 years old, I left my home in Arizona and moved to Washington because I wanted to join the Calpian weightlifting team and be coached by John Thrush. At that time, my lifting had been in the toilet for over a year. My injuries were outnumbering my PRs, and I was getting my ass kicked at big meets. I knew I had the talent to be a top national-level lifter, but I needed the right guidance and leadership.

When I had my first few conversations with John, I was ready to do anything he told me. My mindset was, “This guy knows how to become a champion, and I don’t know diddlysquat. I need to listen and learn from him because he’s an expert and I’m not.” He could have told me to chew broken glass while hitting myself in the testicles with a hammer, and I would have done it. I immediately asked him, “What kind of big changes do I need to make in my lifting?” I thought his first input was going to be about technique, squatting, or something like that. But here is exactly what he said:

“Well, you’re 5’11 and you weigh 90 kilos. So the first thing you need to do is move up a weight class. You’ll probably need to move up two classes eventually. At your height, you need forty or fifty pounds more bodyweight if you really want to make it to the top.”

Like I said, I was ready to do anything he told me. So that’s exactly what I did. I was totally open to gaining a crapload of bodyweight because it was obvious that my body was ready for it. I had been at 198 lbs for three years. Like I said, I was 5’11 and twenty years old and I was already starting to gain a little weight even before John said this to me. At the time, I was snatching 120 kilos (264 lbs) and clean and jerking 150 kilos (330 lbs). Good lifts, but nothing special at the national level.

So John was right. Everything he said was true, and I went on to accomplish the big goals of my career because I listened to him.

I got the idea for this article after I read the “Body Image and Bodyweight in Weightlifting” post from Jessica Salvaggio. Jessica’s blog was mainly focused on how these issues relate to women, and she obviously nailed it right on the head. I don’t have anything to add to what she said in regards to the ladies. However, the bodyweight issue is different for men. That’s where I’m going with this. Ladies, you should still continue reading because many of you will probably coach male athletes…or date/marry male lifters…etc. It’s valuable for women to understand how guys view this topic.

When guys get involved with lifting weights, most of them WANT to gain weight and get massive. They don’t want to get flabby and disgusting, obviously. But almost every dude I’ve ever known in the iron game loves the idea of packing on muscle. I wish I had a nickel for every time a guy has asked me, “What’s the best way to gain weight and get huge?” over the years.

CrossFit guys are a little different. They want to be “strong” but they also want to be “fit.” I haven’t been asked about gaining bodyweight by a lot of CrossFit guys. Obviously, it’s mainly because they want to stay in shape for their metcon stuff, cardio work, etc., and they don’t want twenty pounds of bodymass weighing them down. Totally understandable.

That’s where the separation starts to take place between CrossFit and weightlifting. If you really want to be a successful high-level Olympic weightlifter (especially in the men’s division), fitness can’t be a big goal for you. Lifting big weights in the SN and C&J has to be the ultimate priority. Nobody at the Olympic Trials is going to give a damn how many double-unders or pullups you can do.

There are some strong guys in CrossFit, that’s for sure. And if you look at them, they’re all carrying around a pretty substantial amount of muscle mass…given their basic frame size and height. Some of the best ones can lift weights in the SN and C&J that would be competitive in OLifting. They’re strong guys, no doubt about it.

But the kind of “strong” I’m talking about is just a little different. I’m not talking about being “strong” enough to beat all the other CrossFit dudes. I’m talking about 500 lb front squats, 600 lb back squats, 425 C&Js, that kind of stuff. You’ve gotta have some mass under that barbell to lift those weights. Obviously there are a few elite athletes who can lift those weights I mentioned at 165-175 bodyweight. But if you look at those guys, they’ve clearly got a lot of muscle density for their height and frame. Most of them are 5’6 or shorter with skinny wrists. That means they’ve packed on a lot of bodyweight…for their size.

So what am I really saying here?

Am I telling you to abandon your fitness goals and start piling on bodyweight? NO.

Am I saying that you can’t be “strong” and “fit” at the same time? NO.

Am I saying it’s impossible to be really strong if you have some fitness work in your program? NO.

Am I saying that everybody gets the same results from the same approach? NO.

Am I saying increased bodyweight will guarantee you a bigger total? NO.

Phil D.
Great article Matt, it reminds me of something Steve Pan told me when I started learning the Olympic Lifts. I was between weight classes at the time (69 Kg vs 77 Kg). I asked Steve if I should try dieting down to the 69 Kg class and he responded "Phil, this sport is called weight LIFTING, NOT weight MANAGEMENT."

Jean-Benoit Larouche
Very good article. I always had in mind that I would need to get stronger but staying in the same weight class. I am 5'11'' too, but at 84 kg... I should start bulking up a bit! However, anyone has a suggestion on how to pack weigh ? Definitly not used to this!

Thank you very much,

Mason Stevens
Great article! This is exactly the advice that I need to hear, and yet I can feel myself resisting it deep down. I’m brand new to a sport with weight classes, so this has taken some getting used to. I’m 6’ and walk around at 81 Kg. So far I’ve been able to make weight as a 77, but my coaches and teammates have encouraged me to go up to 85. With a total of only 212, my goal of qualifying for a national meet seems a lot further away as an 85. Plus, the 85s seem very well represented at the local meets. See how many excuses I can come up with? I know what I need to do though.
Dave Ogilvy
Great article, Matt. Out of interest, how did you go about putting on weight? Simply eating heaps more? Carbs, milk, protein etc...?
Matt Foreman
Hey Dave,
I just ate more of everything. I didn't get too obsessed with nutritional balance because I was on a search and destroy mission. But aside from that, it wasn't hard to gain weight because that's just what my body was growing into. I honestly didn't have to stuff my face five times a day or anything. I was ready to grow, so it just happened naturally. My diet was lots of meat and pasta, milk, pizza, Subway, etc. I didn't eat many vegetables, but I should have.
Ali K
Great article Matt, I'm just over 5'11" and hovering around 94kg trying to compete against guys 3 inches shorter than me. Time to stop worrying about a six pack and put some proper weight on!

Deepak Sharma
what should be the weight for 5 -9 man for Olympic weightlifting ?
94-105kg

Greg Everett
CC
Thanks for the article, I enjoyed it :-)
Rick
What are you guys on the GEAR !! It is the worst substance a weightlifter can ingest , if you guys are not on ROIDS I will lift against anyone , I gained my strength through hard work and diet and not athletic enhancement medication !!