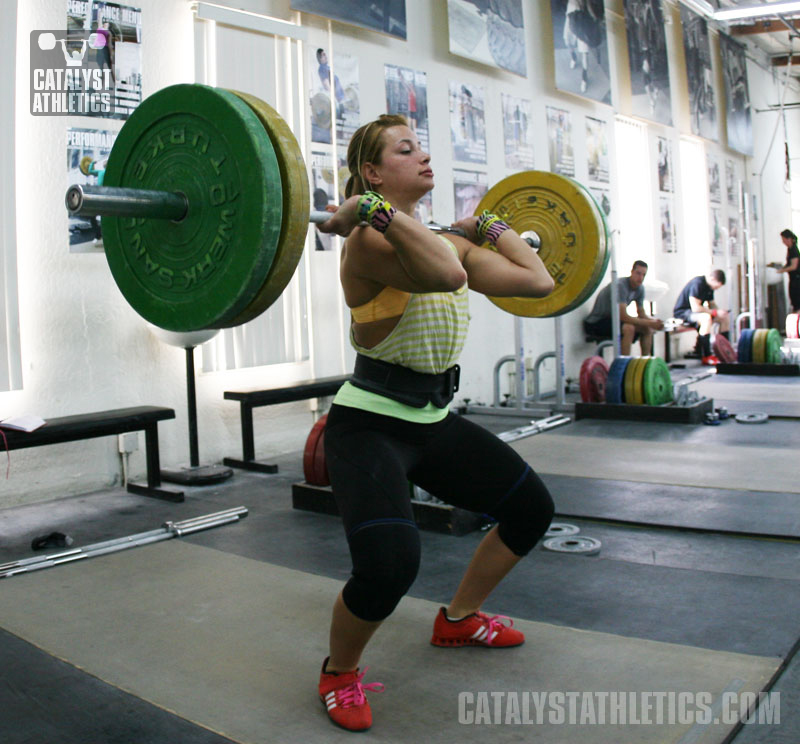 Like most women, my weight fluctuates. Unlike the majority of women, I compete in a sport with weight classes. What I weigh and how much I lift determine how successful I am in this sport. When I eat the same consistently and still fluctuate, it causes some conflict with competition. Some days I'm 61kg and some days I'm 57kg. I've always struggled with the decision between cutting weight and not feeling as good at the competition or moving up a weight class and having the disadvantage of being smaller than most of my competitors. Decisions are stressful, so lately I've been deciding on the fly. What will I be at nationals? I guess we'll see.

With the consistent weight fluctuation I've had my entire lifting career, I've developed this magic power where I can look at myself in the mirror in my Lulu bra and shorts and have a fairly accurate estimate of what I weigh. Even if thatt sounds like a blessing, it's actually a curse. I can look in the mirror and see I'm over my weight class (58kg). I see my belly isn't flat I see my butt takes over the entire mirror I see my hips desperately trying to rip through my Lulus. I have to remind myself the extra weight makes me stronger. I have to remember that just because I'm not built like Barbie doesn't mean I'm not beautiful.

In competition, the numbers I hit aren't reflective of the numbers I hit in training. Why, though? Two kilos isn't that much weight to lose—it's basically a starburst. It’s because that change in my body mass changes the way the bar feels on my chest and it changes how I move. I experimented lifting up in the 63kg weight class for a year last year and I was stronger than I've ever been. In my head, though, my strength still wasn't good enough to be the lifter I wanted to be. I want to break records and make teams, and in my head, as a 63 that was an unrealistic dream. My confidence isn't high enough at that body weight. It could be that I don't like how I look as a 63, or it could be I don't like how I move or feel. I'm stuck in limbo.

I used to say that if someone told me that if I gained 100kg I'd be an Olympic gold medalist tomorrow, I'd do it. My dreams are steep, they're heavy and they're enormous. Sometimes I have to say, "Jess, your dreams are bigger than the mirror you're looking into and they sure as heck don't care you're not 6 feet tall and 100lbs." Who defines what's beautiful anyway? The magazines? Last time I checked, Selena Gomez wasn't trying to win the Olympic Games, TMZ wasn't a National Champion and Perez Hilton isn't an American record holder.

I fantasize daily about not caring what I weigh, that I could just train and eat and live without stress. I look at CrossFit girls’ bodies and think they look great, when in reality 99% of them weigh more than me. What's it like for them to not really worry from day to day how much the scale says? Are they worried if they eat a whole tub of almond butter in one weekend that they're not going to make weight and have their entire year ruined because they didn't qualify for worlds? What's it like to sit down at a restaurant, look at the menu to order, and not weigh everything in your head first? What’s it like to not have to log every meal and take a picture of your portion sizes to send to your coach?

Sometimes I wonder what would happen if I just stopped thinking about it, trained my butt off, let my weight go where it wanted, and avoided mirrors for three months? Lydia Valentin is beautiful and she's a 75kg lifter and an Olympian. Holley Mangold is gorgeous and she's a super heavyweight and Olympian. I'm Jessica Salvaggio and I can be too... Either as a 53, 58, 63 or 69.

I truly believe beauty should defined by the person’s passion for what they love, not what's on the outside, or what's on the scale. Even though I have to check my bodyweight on a daily basis, the number doesn't define me; what's on the bar when I lift it does.

Kirsten Shaw from IFAST
I friend of mine posted a link to this on fb. "Even though I have to check my bodyweight on a daily basis, the number doesn't define me; what's on the bar when I lift it does." PURE GOLD.
Anon
ive too been where you are under the re strain of makin a weight class and loving the lighter me physically - then i did what youve wanted to do let go just eat what feels natural and train my ass off - the result was me going up 6kg in less than a year and definately adding more bodyfat on than ive ever wanted. its depressing. now on the other side of the wall im struggling to ever get back to your discipline of weight management - grass is never greener on the other side
Morgan Olson
Thanks girl you're awesome. Love being strong, sometimes it has its draw backs in the normal world but a good reminder is to be somebody
jess
I can relate... I've started taking creatine & protein & I've put on 8 kilos! I'm not any bigger though... But it's so hard not to read into the scales that much....
Mauricio Noel
hi there. I think its a matter of cultures, social media. I mean, define beauty? its not just whats your weight or your bra size. its everything. YOU are beautiful, just the way you are, im completely sure, even if i dont know you. I bet you must be that kind of person dedicated and passionate about your sport, or anything you want to accomplish. so stop getting stressed of common useless things like "scales". love yourself and the rest comes with it. everybody will feel that vibe. and they will realize the true person you are. Peace Out. Greetings from Costa Rica. Pura vida.
josh Mailey
I think the CF Girls you reference are only different in one very important way, they only worry about output. The numbers on the bar are the important part of this. Don't get trapped in "defining beauty" with "training outputs' Two different topics of conversation. If you focus is being a champion, then output is your measurement, the rest is just "noise". silence it.
Jess B
Thanks for this article! I can totally relate. I was a D1 college volleyball player who dealt with a eating disorder for year. I later/recently found CF and even more recently oly lifting. This helped me change my relationship with food and realizing I need it for fuel. My battles have lessened, but still exist. I am 35 years old and thinking about doing my first oly competition, I border around 78kg and are contemplating dropping to a 75 or staying 75+. Its helpful to read and be inspired by you! Thanks!
MAK
Jessica, as a father of a 22 year old athletic daughter, as well as, a fully "RED BLOODED" American male, you are beautiful and much more!
Li
You're not the number on the scale, nor the weight on the bar you lift, nor the 3 little lights. You are who you are. You know the work you've put in and the moments you've been human; you know the obstacles you have overcome and the ones you battle every day. And hopefully you also know the inspiration that you are because of your integrity, honesty, and grit.