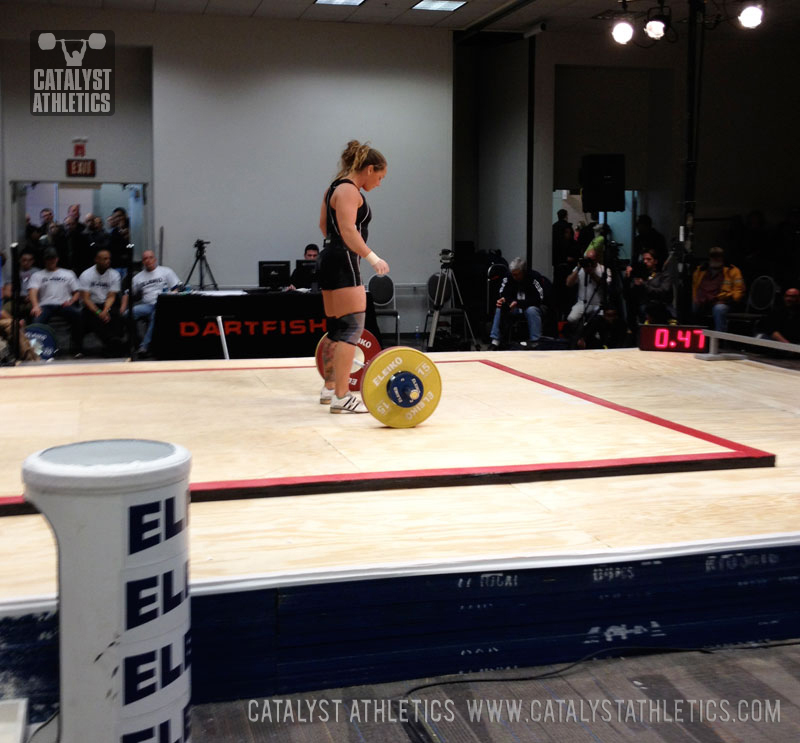 One of the obvious questions in a sport with bodyweight categories is which category to compete in. This will vary among athletes and sports. The scheduling of weigh-ins is probably the biggest determining factor in how dramatically an athlete can play with his or her weight. In sports with weigh-ins 24 hours before competition, huge amounts of weight can be lost through dehydration to make weight, and then subsequently gained back with no detrimental effects. In the sport of weightlifting, on the other hand, weigh-ins are 2 hours before the lifter's session, and depending on the order, an athlete may have only 90 minutes between the time he or she actually weighs and the start of the session. This greatly reduces the amount of weight that can be lost because there is insufficient time to rehydrate adequately. This doesn't mean weight loss through dehydration can't be done, it just means it will either be a smaller amount of weight or the effects will cut into performance.

So, the question remains: What should your bodyweight be?

For most recreational weightlifters, the choice will be made based on proximity to natural bodyweight. For example, if an athlete walks around normally at 83 kg, he is an 85 kg lifter. In a situation in which natural weight is right in the middle of two classes, the choice should be made based on a couple factors. First is what's possible and/or practical for the athlete. If he is 81 kg, he's equidistant from the 77 and 85 classes, so in theory he could go either way. But if this athlete is a bit soft at 81 kg, it makes sense to try to lean him out to 77. If instead he's already pretty lean and muscular, it makes more sense to fill out to a full 85. Next to consider is simply the athlete's ability to gain or lose weight. One will always be easier than the other for an athlete. If an athlete really struggles to gain weight, it may not be worth the effort, and this is even more true for losing weight, since it's obviously more taxing and has the potential to be quite detrimental to strength and recovery capacity. Finally, there’s always the option to simply remain under the weight class limit at the natural weight.
Bodyweight becomes far more important for competitive weightlifters. There are three basic points to consider: The athlete’s the athlete’s natural bodyweight, height, and the competitiveness of the possible weight classes.
Like for the recreational lifter, the athlete’s natural bodyweight is the starting point—a lifter is not likely to move up or down more than one weight class unless that lifter is young and growing. I’ve heard more than once a lifter say something along the lines of, “Well, I can make the qualifying total as a 77.” Unfortunately, that lifter is doing that total as a 94. In other words, it’s never going to happen.
If a lifter is naturally between two classes, the decision on which to move to is based on body composition, the lifter’s height, and the relative competitiveness of each class.
A lifter who weighs 81kg may choose to lift as an 85, even without filling out the category, because his lifts make him more competitive in that category that he would be as a 77. This will change year to year and even meet to meet. In the case of a more competitive lifter, it's important to maximize bodyweight within the allowable limit. While not necessarily true in other sports, in weightlifting, there is no benefit from being lighter than necessary. More bodyweight, even if less than perfect in composition, will bring with it more muscle, which is more potential for strength. Composition can always be improved over the long term while maintaining essentially the same weight. Yes, it’s possible to win in competition by virtue of lighter bodyweight when two competitors lift the same weight—but that’s not exactly a sound competitive strategy when the lifter is also giving away potential strength.
The lifter’s body composition will factor in as well—a very lean lifter will struggle to move down a weight class, whereas one with higher body fat should be able to move down without any legitimate performance decreases by leaning out. If the lifter is between classes but carrying too much body fat already, gaining weight to up a class or fill out the current class is more likely to simply make the lifter fatter and fail to improve performance.
Finally, competitive lifters need to consider their height:bodyweight ratio. In general, American lifters are too tall for their weight classes; our international counterparts tend to be considerably shorter.
Bodyweight classes for weightlifting are arguably more about regulating height than weight. Smaller lifters have better leverage and are able to lift more weight relative to their bodyweight. This is hugely problematic for tall, thin lifters who would be competing against much shorter, stouter lifters. There are certainly world class lifters who are surprisingly slender, but they are not normal. In order to ensure more reasonable competition, these lifters will usually need to increase their bodyweight fit into a category that places them up against lifters of similar stature.

Finally, at what weight should an athlete train? Some lifters prefer to spend most of their time heavier than their class and then drop the necessary weight as a meet approaches. This may be because their natural weight is a bit heavier than their class, or it may be because they feel they can train heavier and harder at the higher weight and this is beneficial both physically and psychologically. If the lifter can cut water weight effectively to weigh in for competition, there should be no performance loss, and a potential gain because the lifter will actually be competing at a weight heavier than the class limit. However, if a lifter trains so heavy that he or she has to lose weight through diet manipulation rather than simply dehydration, there will very likely be a loss in performance. Often in these cases, the lifters will refuse to accept this, and you then have the problem of performance loss compounded by the lifters’ insistence in excessively high attempt weights and resulting low success rate.

I recommend different approaches depending on the lifter’s ability to cut weight effectively. If a lifter is experienced in cutting weight and can demonstrate consistently that it’s not problematic, then training heavy is acceptable within an agreed-upon limit. I suggest that people restrict this to 2-4% over their competitive weight to prevent too much difficulty dropping weight and limit any false sense of ability that disappears when the weight is lost. For example, a 53kg woman would train no heavier than 54-55kg.
How to actually cut weight is an entirely different topic that I will cover another time. For now, just keep in mind that the more you have to cut and the shorter the period of time in which you do it, the more taxing and harmful to your performance it will be.

Kyle
Greg,
Thanks for the article! Feels like a slightly silly question, but...any tips on weight gain? Thanks!
Greg Everett
Kyle -

Eat more and do more volume in training. Beyond that, I would need more specific questions.

That in itself is helpful! Don't want to take too much of your time, thank you for responding!