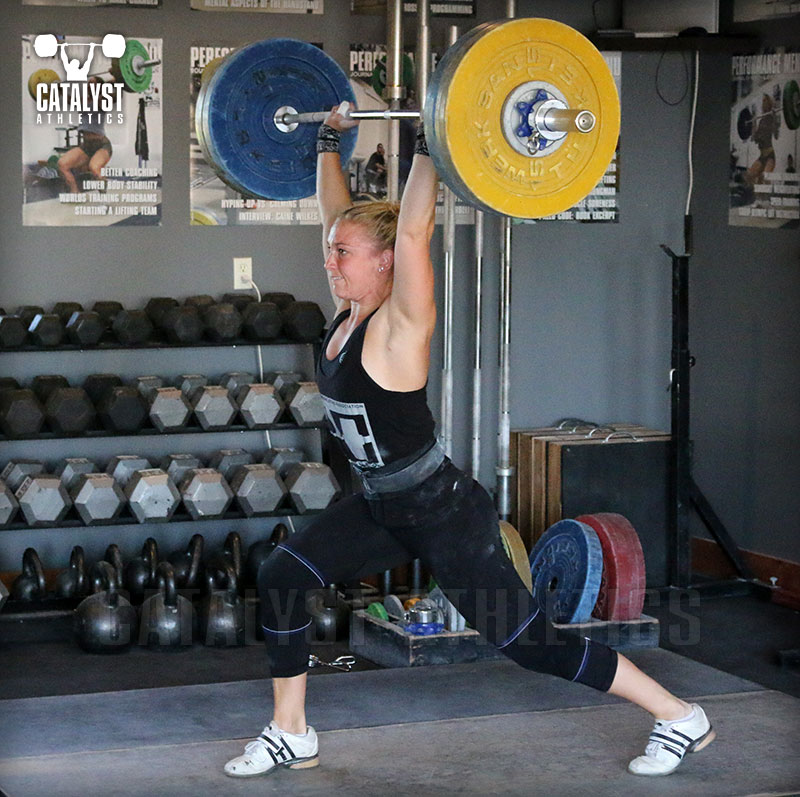 See more articles & videos like this in the Weightlifting Competition Performance collection.
I like plans, structure, routine and patterns. I’m a bit like Rainman—if I don’t get home in time to watch Wapner, I’m going to lose my shit.

However, I’m also rational enough to understand that no matter how great a plan is, one of the most important elements to success is not only being willing to adapt and change during any given process, but knowing how and why to do so. There’s a big difference between recognizing the need to adjust a plan already in motion and making rational, purposeful changes to achieve the same goal, and freaking out and completely abandoning a plan in favor of total chaos at the first sign of a problem.

Weightlifting competition is a perfect situation to illustrate the importance of having a plan and structure in place, and being willing to adapt as needed as things play out—having no plan is a recipe for a mess, and being unwilling to change that plan can a good way to shoot yourself in the foot.

A few weekends ago, I competed for the first time in about a year and a half after tearing my arm partway off at the 2015 National Championships at American Masters in Buffalo. I haven’t been back to snatching and clean & jerking very long, my mobility is still somewhat restricted, and I hadn’t really tested either lift prior to the meet. In other words, I really had no idea what I was capable of. But considering I hadn’t competed in so long, my strength was nowhere near what it was, my mobility and stability were limited, and I knew I was going to be thinking of the tearing green tree branch sound of my shoulder exploding on each snatch attempt, my plan was to select pretty conservative weights, opening with 110/140, which I had done 3 or 4 times in the gym in the preceding 6 weeks or so and was consequently pretty confident with. From there, 4-5kg jumps in the snatch and 5kg jumps in the clean & jerk was the plan depending on how I felt.

Based on the entry totals, I assumed I would be opening pretty late in the session, and based on the number of lifters in the session, I planned to not need to begin warming up until the session actually started. Of course, attempt cards weren’t put out until right before the session started, and then a couple lifters were moved from my session to the session on the adjacent platform. Compounding the problem was the fact that my snatch opener was not actually toward the end—there was a stack of 110 and 111 openers, giving me something like 8 attempts to warm up. Change of plans.

By moving my opener to 112, I bought several attempts. I also dropped a couple of my warm-up sets, of which I had more than usual because I was taking smaller jumps than I normally would due to the shoulder, and took the first few warm-up sets more quickly rather than every 3 attempts or 3 minutes. This allowed me to get warm and ready for my opener without any real problem despite suddenly finding out I had about half the time I expected.

Originally I had planned to go 110-115-120 in the snatch. After making the 112 opener easily, I moved to 116 rather than still taking a 5kg jump—115 was the most I’d made since my injury, so it would get me a kilo past that, and also not overreach for that attempt or my third. I was pretty confident 120 was the most I would be able to comfortably hit based on the present stability of my shoulder and my reduced confidence in holding weight overhead.

116 was just as easy as 112. So easy I threw it too far back. The last time I fought to save a snatch that was too far behind me in competition, my arm fell off, so I immediately dropped it. And then of course even knowing I would do it, I under-pulled my third at 116 and missed again.

Another lifter had snatched 122, which meant I needed to clean & jerk 11kg more than him to win—but we both had our openers set at 140, so I was not particularly sure that was going to happen. But since this guy was warming up right in front of me, I figured I’d keep an eye on him to get a sense of what he seemed capable of, and to adjust my lifts to beat him as long as my shoulder was holding up for my jerks.

The platforms at this meet were exceptionally slippery—my feet were sliding even just pulling snatches. With my shoulder in the state it was, I wasn’t willing to risk slipping in the split, so I decided as I started my clean & jerk warm-ups to power jerk. The problem was that my power jerks and push presses hadn’t exactly been going well lately because of my limited mobility, which made it really tough to hold the bar overhead with a jerk grip, and gave me some pain through the middle of the pressing motion. However, I figured that was better than bombing out and hurting my shoulder with a 140 jerk because we were lifting on a skating rink.

The power jerks actually felt pretty good during my warm-ups… and my guy across the way was looking a bit sketchy with his jerks even on a good platform on which feet didn’t slip like they were smeared with bacon grease. So I chose to stay with 140, making the guess that he would probably hit his opener and then be unable to do more, meaning I could just go to 151 instead of 150 for the win.

I hit my 140 opener easily and moved to 145. He took his opener at 140… and missed the jerk. He repeated. And missed the jerk. Now I’m looking good, but I’m also getting cold because of the 2-minute clocks, so I took a 90kg power clean & power jerk to break up the wait… and then waited to see what would happen on his final attempt. He repeated 140… and missed the jerk. I made my 145 easily, and then got called on my 150 jerk because my lame shoulder couldn’t quite keep that arm steady enough while I was twisting around with the bar overhead because my left arm can’t go as bar back as my right.

In this same competition, Mike Gray found himself in a position in which he had to scrap his plan nearly completely. He’s been dealing with then-undiagnosed knee pain—that’s a really subtle way of saying his knee was often in excruciating pain, and I haven’t seen him able to fully straighten his leg in probably two years; just watching him walk is a painful experience. He was in shape to break the record in the snatch, but during warm-ups, his knee wasn’t cooperating, and it totally shut down his second attempt snatch. He repeated instead of going for the record on his third, snatching 126, which was still the highest snatch of the entire competition. However, at that point, he was in so much pain, he abandoned his clean & jerk plan entirely and decided to curb-stomp his ego and take a single light lift just to post a total—120. After he made it, he limped off and passed on his last two attempts so he could start drinking sooner. His plan had to be changed wholesale, but he adjusted in order to meet what became the most important goal—making a total.

Now I know you’re not exactly staggered by these unimpressive lifts, but let’s stay focused on the elements other than my old age and mediocrity, and Mike’s orthopedic infirmity. Having a sound plan going into a competition is necessary to keep yourself focused and on track when things get a little chaotic or don’t go exactly as expected, and to help prevent you from making rash decisions because the universe hasn’t delivered you perfect circumstances. But being able to calmly and rationally alter the details of that plan while preserving its spirit is equally important—knowing when it’s necessary, and how to make purposeful changes that serve your primary goal better in the new situation than your original plan would.

Like anything else, this gets easier with experience, but you can accelerate the learning process by taking some time to imagine various scenarios, how changes in the circumstances will affect your plan, and how you can best respond to those changes. The best way to panic is to recognize a problem and a need to change and have no idea how to react.

*Thanks to Mike Gray for the article suggestion, and to him and Jim Malone for their help warming me up at the meet.