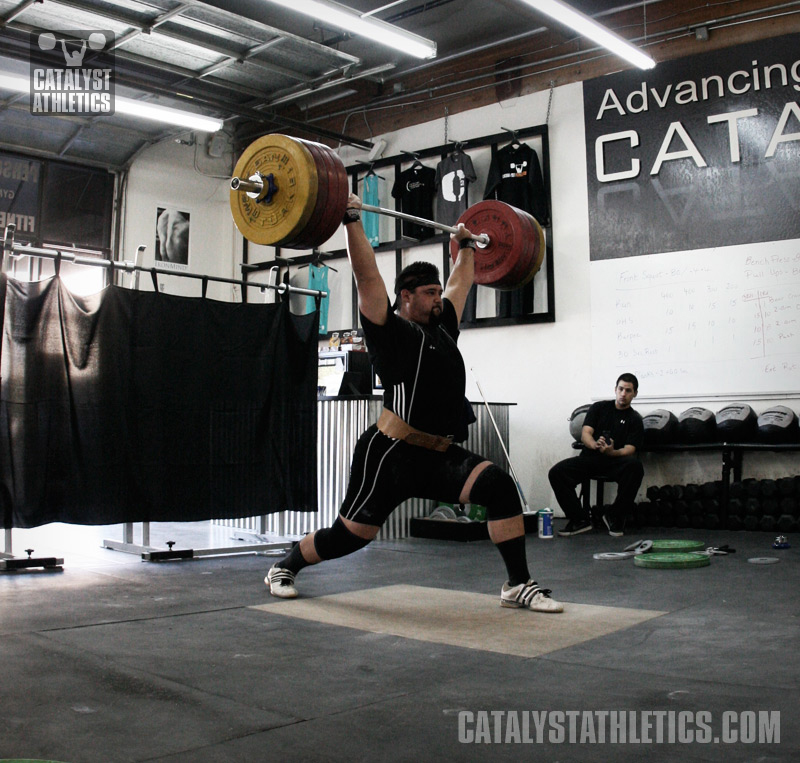 For those who are not familiar, lifters typically take about eight warm-up lifts or sets in the snatch prior to their opening attempts on the platform. The athlete’s coach tries to time those warm-ups approximately two to three minutes apart and keep the rest somewhat consistent so the lifter catches a rhythm before taking their competition lifts. In the clean & jerk, a lifter usually takes about six to eight warm-up lifts before their competition lifts with the same strategy.

Most of the women’s weight classes this year had tight battles from top to bottom. In a couple of weight classes, moving a lifter up one or two kilos made the difference in the lifter taking an attempt ten minutes later than if the lifter took one or two kilos less! That’s very tight competition, and sometimes that kind of tight competition causes unwanted waits and stress that are beyond the lifter’s or coach’s control.

With these things in mind it becomes important to be flexible with your warm-ups as well as competition attempts. Having the ability to add or subtract a warm-up from the planned schedule is very important in these tight battles. When coaches are in the back room, jockeying for position, even a well thought-out plan can quickly be derailed through other coaches moving lifters up and down in weight. I would recommend training a few different warm-up progressions for different timing situations in competition. For example, my ideal warm-up progression might be 50-70-90-100-110-120-130-135 and open with 140kg. However, if I needed to add a warm-up, I might take 135kg twice. If I needed to take a warm-up out I would probably cut the 100kg lift out of my progression. If I was already past 100kg in my warm-up I would take 100-115, 125, 135 or something of that nature. You get the idea! Be flexible and practice multiple different progressions, because things never go exactly as planned.

Having the ability to add or subtract a kilo or two from your planned attempts in competition can be very helpful from a timing perspective as well. For instance, in the 77kg weight class, I have recognized that majority of competitors at the Pan American Championships open at 140kg. If I am coaching a lifter in this session, it is much easier from a timing perspective in warm-ups to open the lifter at 139kg. The warm-ups for this weight are much more predictable and allow the lifter to get an opener in while coming into that lift with a good rhythm. However, by taking 139kg on an opener they will have to wait a very long time between their opener and their second attempt. If they were to open at 141kg, a coach has the ability to more easily control the wait between the first and second attempt, but it will be slightly less predictable having the lifter take warm-ups to this weight in the back room. So there are pros and cons to both strategies, but ultimately I think if you can avoid traffic by opening at 141kg you will have a better performance by avoiding long waits!
The same can be applied for taking second and third attempts. It is very hard to make attempts after waiting 10-11 attempts between lifts. In the same situation if the lifter opened at 130, took 135 on their second, they might have to wait a very long time to take 140kg for a third attempt. Third attempts always go last and if people start missing openers at 140 the lifter could be sitting for a very long time. Consider taking the lifter to 139kg for a third attempt and they will be much more likely to make that lift even though they did not get to the planned round number that is so tempting to try.
Every competition situation is unique, so a strong bond between the coach and athlete ultimately dictates the right choice for each lifter. Always train for different situations, and do not be stuck in your ways about warm-ups because the amount of people opening at similar weights at national competitions is increasing. Find a mentor to help you learn the rules of the back room, and someone to help you count and warm you up properly at competition. Championships are won on the competition platform, but the warm-up room certainly contributes to the success on the competition platform!


Travis Cooper is the 2013 National Champion and Pan Am Bronze Medalist in the 85kg weight class. He trains with and competes for team MDUSA.