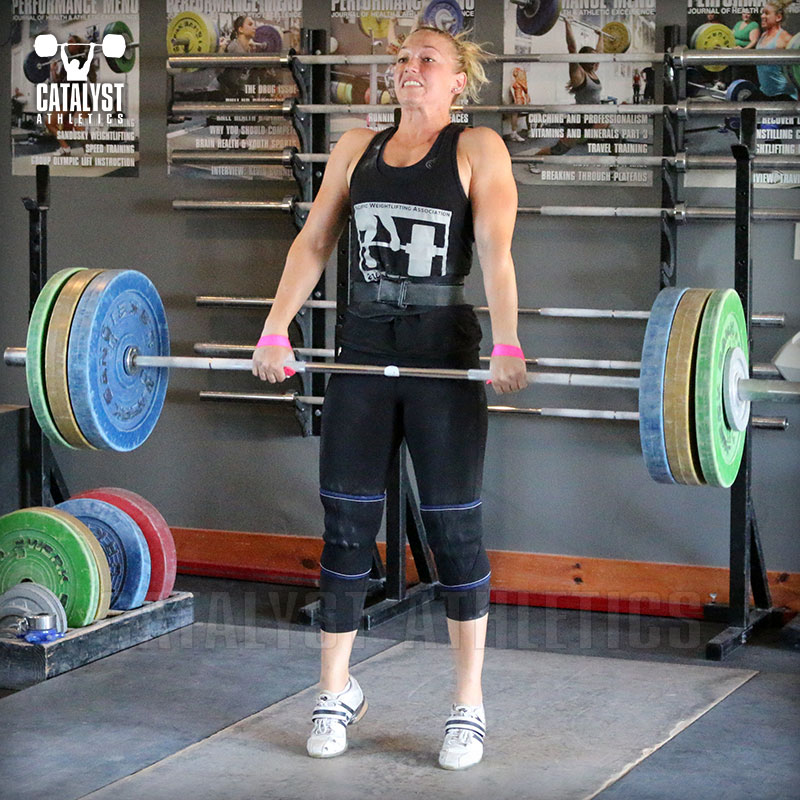 When you started Olympic weightlifting, you learned pretty quickly that it’s a mental sport. “50% mental, 50% physical.” Maybe your coach told you that, or maybe it was a fellow lifter. Or maybe you just figured it out yourself when the difficulty started kicking you in the crotch.

I can take that whole idea one step further. You already know weightlifting is psychological, but you might not understand how ENORMOUSLY psychological it is, and how much of your success and failure in this game relies on what’s happening between your ears.

This isn’t going to be another generic “mental toughness is crucial” article. I’ve got better ammunition than that.

Let me give you the example that’ll show you what I’m talking about, and I can just about guarantee you’ll have personal experience that connects with this. Have you ever finished your snatches or cleans in a workout, and then added 5 kg on the bar to do your snatch or clean pulls, and it felt like the flipping thing weighed 6,000 pounds?

You’ve done this, right? Let’s say we’ve got a lifter who has a snatch PR of 85 kilos. This lifter has a pretty good snatch workout and hits a solid 83 kg, right around PR level, and then pulls his straps out of his bag because the coach has programmed snatch pulls next, 4x3 @ 85 kg (100%). He loads 85 kg on the bar, straps up, and does a set of three snatch pulls that feels like he’s trying to drag the damn Titanic off the floor of the ocean. And between sets, he sits on the bench and goes through the same rigmarole we’ve all said to ourselves. “Holy #%#! That’s only a couple kilos more than I just snatched, and it feels like somebody loaded another half-ton on there! What the $#@!?”

Yeah, we’ve all been there. It’s a completely common phenomenon in Olympic lifting. And it’s also one of the finest examples I can think of to illustrate the idea that this whole thing really is all…in…your…head.

That 85 kg is only a few pounds more than the lifter just ripped over his head to snatch. It’s not a huge difference. If you picked up a suitcase that weighed 83 kg, and then picked up another suitcase that weighed 85 kg, you might not even notice it. But when we approach an 83 kg barbell knowing that we HAVE to snatch it, our mind does something completely different from when we know we just have to pull it up to waist level.

Stop and think about this for a second. It’s an amazing demonstration of the power of the mind. Nothing PHYSICALLY changed between the 83 kg snatch and the 85 kg pulls. But everything changed MENTALLY. There was an entire psychological shift that completely changed how the weight felt.

What can we learn from this? There are several things, actually. First of all, we can learn just how easy it is to talk ourselves out of setting new PRs. If you’ve snatched 85 kg, and you want to set a new one-kilo PR of 86 kg, your mental approach can completely determine whether or not you make it. I mean seriously…if you’re strong enough to snatch 85, you’re strong enough to snatch 86. But if you make any of the mental slip-ups like the ones that happen when you go from snatches to pulls, you’re screwed. Your brain will literally change the way your body moves. Your overall technique, your level of acceleration, whether or not you totally commit to jumping all the way under the bar to stick it over your ears…everything. Your mind changed everything between the snatches and the pulls, right? That means it can change everything between snatch attempts too, if you let it.

How can we stop this mental disaster from happening? There are a few tips I can give you:

1) Continually think about movement cues and technique, not weights- It takes a lot of time and experience to develop this ability, but it can be done. You simply have to practice, practice, and practice forcing yourself to concentrate on how you want your body to move instead of the weight that’s on the bar.

2) Visualization: Ever seen athletes close their eyes for a few seconds prior to a lift? They’re creating a mental picture in their minds of how the lift is going to look. This one takes a lot of practice too, but it’s worth it. I actually played around a little with self-hypnosis back when I was younger.

3) Talk to yourself about the PRs you want to hit, but also talk to yourself about much bigger numbers you want to lift down the road- If you’re snatching 85 kg, you obviously need to keep a running conversation in your head, both in and out of the gym, about snatching 86. However, I’m a pretty big believer in the idea that you should also be talking to yourself about snatching 100 kg. I honestly think this mentality is the reason I was able to reach the level of success I had. When I was a young kid snatching 85 kg, I was obsessed with hitting 90 and I thought about it all the time. But I also thought a lot about snatching 120 someday. I looked at the older guys I saw at meets who were snatching 120, I knew I was as talented as they were, and I figured there had been a time in their early years when they had been stuck at the same 85 kg weight I was doing. They weren’t born snatching 120. In my mind, all I had to do to snatch 120 was put in the work and refuse to quit. I knew I’d get there eventually. My lifetime PR now is 155 kg. (Like I said, talk to YOURSELF about this. Don’t run around talking out of your ass like an idiot. As the Catalyst shirt says…loud mind, quiet mouth.)

Not everybody thinks like this, and this is one of the main reasons they never become great. They snatch 85, and they think about snatching 86 or maybe 90 someday, but they don’t give themselves permission to think about hitting 100, 110, or 120 down the road. To say it in a corny way, they don’t let themselves dream big.

If you snatch 85, you’ll never snatch 120 if you don’t believe you can. Your brain will simply stop you. It’ll pull the same kind of trick on you that makes those pulls feel ten times heavier than they are.

There are many, many steps involved in lifting bigger weights. But the biggest one is belief in yourself, and filling your mind with the right thoughts. If you want to be a champion someday, you have to think like one. Champions don’t think with limits. They literally think they can do anything. That’s one of the main reasons they’re better than everybody else. Whether or not you become a champion someday will depend on a lot of things, but telling yourself that it’s possible in the early stages is one of the big ones.