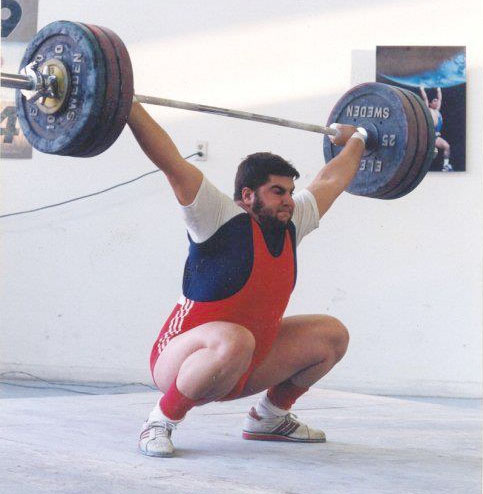 Olympic weightlifting requires the strength of a silverback gorilla, the speed of a cobra, the flexibility of a gymnast, and it helps to have the heart of a lion. But none of these qualities will make a champion without one ingredient. Even all of these attributes together donʼt amount to shit without one thing: dogged determination.

Lifting weights is hard. Snatching is really hard. You may be really strong but you probably suck at snatching. It’s like swinging a golf club. So. Fucking. Frustrating.

And itʼs scary. Throwing yourself under heavy weights as fast as you can is counterintuitive. No matter how strong you are, itʼs daunting.

Some of the best athletes in the world are humbled by the Olympic lifts. With very few exceptions, the only people that are really good at weightlifting have been doing it a long time, probably since before they were teenagers. Anyone who has been doing it that long knows that training to compete in Olympic weightlifting can be a grind. A soul-destroying, thankless, mind-numbing grind. Training long hours, often alone and always in pain. The same few movements day-in and day-out. Making gains a kilo at a time. Sometimes working your ass off for months only to find yourself struggling with lifts that were easy before. Sometimes the only reason you peel yourself out of bed for your morning squats is the countless aches that burn like a thousand suns in your knees and back. Sometimes bending over to tie your shoes hurts so bad that you wear your flip-flops to the gym. In the snow.

If this sounds familiar, donʼt worry... Youʼre doing it right.

Weightlifting is all about adaptation. Adapting your body and mind to extreme discomfort. Stretching your capabilities to their limits. Pushing yourself beyond your pain thresholds and into portals of success. But it is a long, tedious, painful road to adaptation. Most who try, even the blessed ones, fall by the wayside along the way.

Itʼs hard for most athletes to see the light when they are deep in the valley. Fighting the bears and dragons in the deep, dark woods. Grinding it out day after day. Forgetting what itʼs like to be on the mountaintop. Most get to that point just before adaptation occurs then call it quits. Real growth, real adaptation is not possible without real pain. Adaptation is violent and ugly. And itʼs true what they say: Only the strong survive. Not strong of body; that will come. Strong of mind and spirit.

Only those with the mental capacity to keep showing up, keep grinding away, will truly adapt. Anyone can get strong in the conventional sense. But being emotionally strong is the greatest gift a weightlifter can have.

So how do you train your mental capacity? It helps to develop strength mentally and physically at the same pace, meaning starting young is always the best way. Athletes who start older often have all the strength they need physically but are held back by their lack of mental strength. The frustrations born from the Olympic lifts are more like the tantrums of a young kid. Olympic weightlifting has a way of making you feel like an emotional infant.

Developing your mind in conjunction with your physical ability is ideal. Unfortunately, we arenʼt all lucky enough to have found this sport we love at a young age. Many found Olympic weightlifting through involvement in scholastic sports. Others discovered the quick lifts via CrossFit. In fact, most people lifting weights in America today started weightlifting later in their athletic career, after they have developed physically and emotionally.

The most basic tool for developing mental acuity in Olympic Weightlifting is visualization. I know it sounds simple. And it is. Itʼs ridiculously simple. And extremely effective.

Lie down somewhere quiet. Close your eyes. Mentally walk yourself through your warm-up. The more detail you can summon the better. Imagine the smell of the Tiger Balm and sweat that hangs heavy in the air. Imagine how your shoes slide on like Cinderella’s glass slipper, formed to your foot by hours of sweat and toil. Picture the feel of the chalk as you crush it into your raw, calloused hands. Every detail counts.

Now imagine gripping the bar for your first set. You know how that will feel. Something like snapping twigs or broken glass. Each set. Donʼt skip a single attempt. Are you using straps? Or fingers? Are you using collars? Picture yourself progressing through your warm-ups flawlessly. You know how it feels when you do it right. So visualize that feeling. Over and over again. Associate it with some very real imagery. Details. Numbers. Exactly how you plan on doing it on the platform later that afternoon. Hit your weights in your head hundreds of times before you ever step into the gym. Visualize yourself crushing PRs. Not abstract thoughts of success, but very real visualization. Invest emotion and feeling into your thoughts. By the time you actually step onto the platform, you will have already made that pivotal training lift dozens of times in your head. If you do it correctly, you will actually convince your subconscious mind that you have ALREADY MADE IT.

The actual training will seem dream-like. Almost as though you have hypnotized yourself, snapping out of it only when the weight hits the platform and your teammates are congratulating you. But really you are just tapping into the connection between your mind and your body. Maximizing your tools. Using all of your resources.

Remember: the greatest tool you have is your mind. It needs to adapt just as much, if not more than your body. So start training it.

Make no mistake: weightlifting is hard. Itʼs supposed to be hard. Even the name implies shit is going to be heavy. Itʼs WEIGHTlifting, people. So toughen up. Embrace the grind... Adapt!

Greg Everett
This is a great article. I find a lot of people now getting involved in weightlifting have an expectation of feeling "good" every time they train - no pain, continuous steady improvement, no fatigue, etc. I have a very hard time understanding the mindset.
Matt Foreman
I totally agree. Many people think there's something wrong with them when they start hurting. Pain just comes with the territory in this business.
Sri M
This is a great article. So many times, people tend to overlook the mental aspect. A good book to read is the Way of the peaceful warrior.
Liz Becker
I'm so glad I read this. A lot of people quit when it gets tough, not just in weightlifting but in life. The people who are strongest mentally always come out on top and this article gives great ideas for strengthening the mind. Love it!!
Stubbsy
Great article. Thank you.
bob
Couldn't be a better read for someone who's 18 months in, having started at the age of 45
Ruben Cortez
This is a great article with lots of great information. I was introduced to weightlifting through Crossfit. I'm 40 years old and can definitely attest to the aches and pains (especially the next morning). Often times it's painful just stretching out before my weightlifting then right into my Crossfit class. I've had to strengthen my mind in order to not give up...Thanks for the article!!!
Jake Palmer
Let's not forget, however, that overtraining is a real thing. Especially in the highly motivated "type A" masters athletes you reference. Give yourself an honest assessment of your sum total life stresses, job, family, kids, sleep quality, nutrition, training schedule, before you tough-guy yourself into a metabolic hole in the ground.
Alistair McCready
Man...what a great article. I hung on to every sentence - it's like you wrote down my journey into this thing. Huge.
Ed Sekelsky
Amen

Mark Stubbs
Fantastic article.
Brittney Rymer
probably one of the best articles I've ever read.
Joshua Davis
Something I was relating to my coach the other day. I've recently broken through some plateaus and am lifting 5-15kg more than I ever had... during a warmup I realized that 100kg is still 100kg, no matter if it's a warmup, or 75% of your opener, or if it's 10kg under your opener. And even when you pass that milestone by 30kg or 40kg, 100kg still feels like 100kg. It will never "be" easy, it will never feel light.
I told my coach this, and his response was to the tune of, "Being a weightlifter is knowing this and still going after 130, 160, 200kg."

I'm not saying there are diminishing returns, but I can say the pain is cumulative grinding for those kilos.

Juli Peterson
This is awesome. Exactly what I've needed after the past couple months of my body forgetting how to snatch heavy.
Wannabe Weightlifter
Love this. Thank you.

Jasha Faye is a level 2 USA weightlifting coach and has been involved with the sport for over 25 years. A former Junior American and University record holder, Jasha represented the United States at 3 Junior World Championships, where his highest placing was 9th. He was Junior National Champion 3 times and American Champion twice. He was a resident athlete at the US Olympic Training center and he competed at the 1996 Olympic trials. He learned from two of America’s most prolific and successful coaches, Steve Gough and Dragomir Ciorslan.