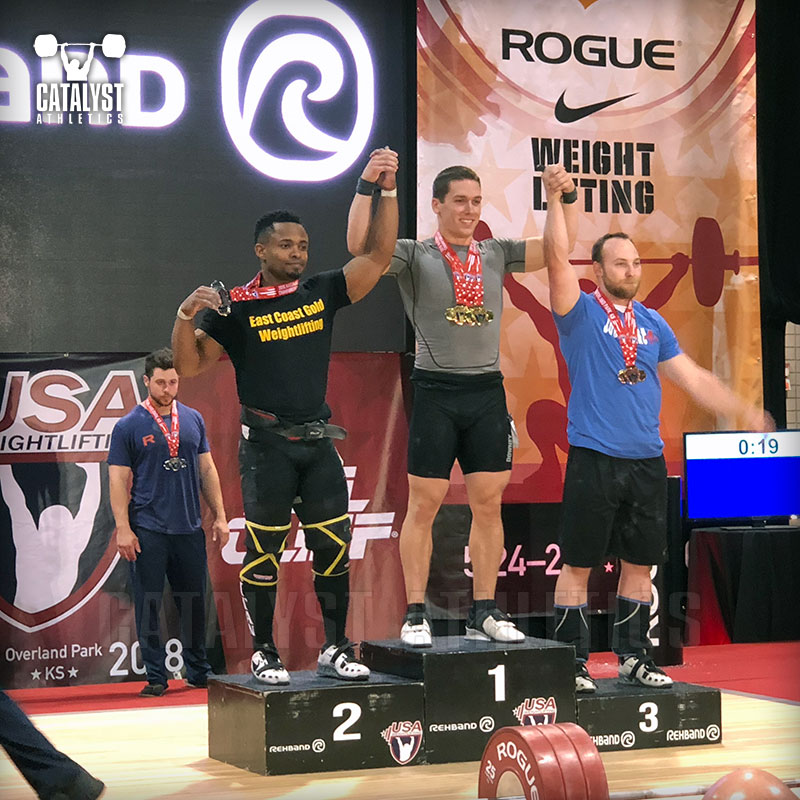 See more articles & videos like this in the Weightlifting Competition Performance collection.
You can break competitive weightlifters into two big categories: Those who love to compete, and those who don’t. I realize it sounds odd to talk about competitive weightlifters who don’t really like competing, but it’s not that uncommon. These people tend to enjoy the training process and the results of having competed, but not necessarily the competition experience itself. They’ll do the meets they need to do to achieve their goals, but they won’t be going out of their way to jump in on any others. The other extreme are lifters who you have to physically prevent from competing in every single meet within a 500-mile radius all year long.

So the question is: How often should you compete?

The answer, like essentially everything, is that it depends entirely on who you are: in particular your level of experience and your goals.

As a new lifter, competitions serve a different purpose than they do for more advanced lifters. The point is to gain experience with the act of competing: to practice the routine, to become accustomed to the protocol, to become immune to the stress and the pressure and the fear and the anxiety. When you’ve done a million meets by the time you’re lifting at the senior national level and beyond, it’s already routine and you’re able to focus on executing lifts rather than being stunned by everything that’s going on around you.

Part of this experience is making lifts. I can’t emphasize this enough, especially for young athletes. At this stage, you should be going 6/6 at every meet with few exceptions—like because you made a silly mistake, not because the weights were too heavy—and be attempting to make those lifts as technically sound as possible. This will likely mean you don’t make PRs in meets very often if at all. That’s fine. That’s not the point.

There is a very simple reason for approaching competition this way at this stage: The goal is to develop consistency and confidence, to instill deeply in the athlete the expectation of making lifts. It should be a foregone conclusion every time that there will be 3 successful snatches and 3 successful clean & jerks. This confidence and mindset will carry over into the more advanced stages of the career and make a huge difference.

Competing more often provides more practice, and it’s possible to do physically and mentally because in these earlier stages, you’re snatching and clean & jerking weights considerably below your actual physical capacity. Your maximum lifts are limited by technique (and often mobility), not by strength. Consequently, competitive lifting has a negligible physiological effect—it won’t be any different than any other day in the gym, and really should be even less impactful because it will be considerably less work than you’re likely to do in the gym on any given day.

It’s also less taxing psychologically. Because the weights are not maximal, because the attempt is not to do maximal weights, but to do 6 lifts, and because you’re not battling it out with other lifters for medals, it doesn’t place the same stress on you mentally. It should be an enjoyable experience that makes you want to turn around and do it again soon.

Finally, the newer you are, the faster you respond to training and progress. In other words, it takes less training time to produce a given increase in your best snatch and clean & jerk, which means that frequent competitions aren’t disrupting the kind of extended training cycles needed by more advanced lifters.

As a beginner, compete as often as you want. It’s not going to hurt you if you do it the way I’ve described.

As you advance, you begin to be capable of using more of your actual physical capacity in the snatch and clean & jerk, meaning your maximal lift attempts are more taxing physically and mentally. Add the adrenaline and stress from competition, and those lifts, even though few, are a big deal. You may have experienced the feeling of being totally drained and sore from doing lifts that have had neither effect on you in the gym—that’s the effect of the adrenaline and psychological arousal.

In addition to being physically capable of more, you’re going to be pushing yourself harder in competition to achieve certain numbers. This doesn’t mean you shouldn’t still always be expecting and attempting to make all 6 lifts, but it does mean that you’re going to miss more lifts sometimes you’re taking attempts that aren’t guaranteed makes. You may be aiming for PRs, or to earn medals, or to secure a spot on an international team. Those goals change the competition strategy.

As a more experienced lifter, progress requires more time and stimuli. You have to invest extended periods of time to incrementally nudge your lifts up with well-planned training cycles that may be anywhere from 12 to 24 weeks long. If you try to compete too frequently, especially if you’re tapering at all for the meets, you’re preventing yourself from training through an entire cycle and limiting the results you can achieve.

At the highest levels, you’re most likely going to have only 2-3 meaningful competitions each year for which you truly train and peak for. These will be the days you prepare and expect to perform at your absolute best, ideally with all-time best lifts.

This doesn’t mean you can’t compete at all between these big meets; you’re just going to do things differently. Instead of peaking for them, you’re going to train through them. That is, your training program won’t change at all to accommodate the meet—the days before and after will be exactly the same as they would be if you didn’t do the meet. Meet day will in effect be a heavy training day for the snatch and clean & jerk, which you’re very likely doing at least once a week anyway.

These insignificant meets give you some more practice (often referred to as tune-up meets) to keep your competitive mindset and routines sharp, but don’t cause any problems with the long-term training for the competitions that really matter. If you have 2 major meets each year, you might do 1-3 insignificant ones that are well timed to not interfere with your big plan.

There will be times when you end up having to do more meaningful meets than would be ideal for your training, such as some kind of qualifier that requires you to do your absolute best. In other cases, you may have to do such a meet, and do well, but not your absolute best. For this kind of a meet, you can modify the larger training cycle around it with a partial taper—really just a back-off the week leading into the meet so that you’re able to do your best in the shape you’re currently in (not absolute best—that’s being saved for a later date).

Compete as often as you need to. That means if you live to compete, do as many meets as you can make work productively according to your goals. If you’re a lifter who could live without the competitions, make sure you’re doing enough to be adequately practiced for the ones that really matter to you—you may have to talk yourself into doing more than you otherwise would. And for you recreational lifters who just want to go have some fun, by all means, compete as much as you want, whether planned or on a whim—no reason you should be doing anything other than what you enjoy.