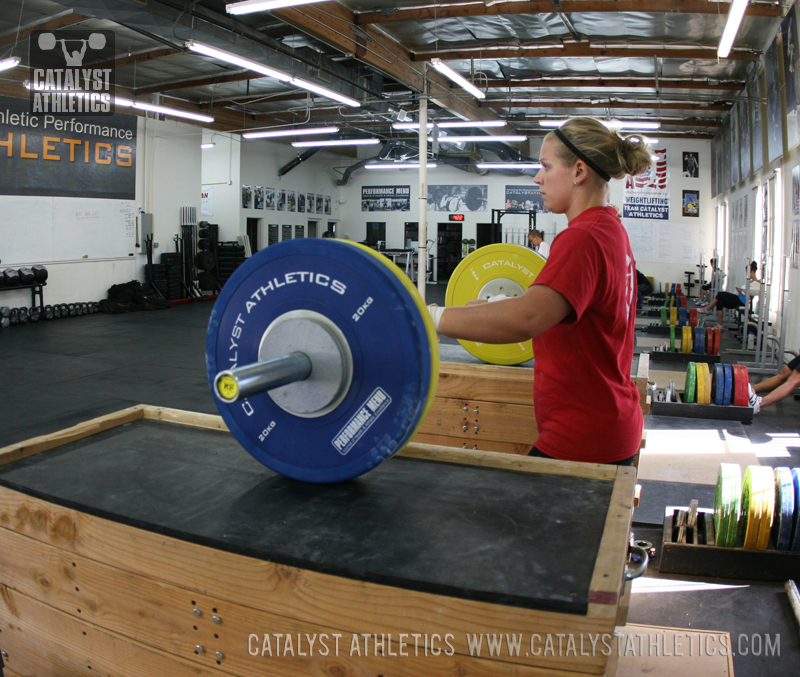 See more articles & videos like this in the Weightlifting Competition Performance collection.
All great athletes have a mental switch, and it should be your goal to get one too.

Think of a light switch in your house. You flip it, and the lights turn on. Pretty simple, right? Well, a mental switch is in your brain. When you flip it, your mind goes to a state of perfect concentration, intensity, and confidence. The most experienced athletes usually have really effective, powerful mental switches. They can make themselves internally sharp with a snap of their fingers, just by recognizing that they’ve got a job to do and it’s time to get it on. They can be having a conversation and maybe a few laughs, and in a matter of a few seconds they’re ready to rock and roll. They recognize the task in front of them and apply the right level of inner strength to it. Then, after they’ve taken care of business, they can flip the switch off and relax.

Like most things, this takes a long time to develop. I had a hard time with it when I was young, I can tell you that. I used to be one of those guys who spends a couple of hours, or maybe even the first half of the day, getting psyched up for a meet. My lifting was serious stuff, so I thought I needed to do some kind of complete psychological transformation before I hit the platform. I would go somewhere by myself, listen to some good devil music, and try to get as jacked up as possible. I can’t say it worked that well. Instead of taking myself to weightlifting nirvana, I just spent a lot of time getting really tense, nervous, and agitated. By the time I got to the warm-up room, I was an irritable prick that nobody liked. And if I lifted like crap in the meet (which I often did), forget about it. I was ready to start throwing orphans into wells.

I figured out that I don’t perform well when I’m not happy. Do you ever find that? Over the years, I’ve had a lot of people ask me if weightlifting is a way for me to release all my daily frustration and anger. For some reason, people think lifting weights is like some kind of colon flush for rage and hostility. It’s never been like that for me. First of all, I don’t walk around pissed off all the time, so I don’t come to the gym with any anger that needs to be released. Second, I’ve found that I always lift better when I’m in a good mood. So the psyching method I used of going off by myself and working my brain into a cranked-up frazzle usually had the opposite effect from what I was going for. Instead of taking me where I needed to be, it took me farther away from it.

Maturity and experience took care of everything. As my career progressed, I just calmed down and developed an ability to switch into the right mental state when I needed to. It’s a weird combination of relaxation and intensity, which are two things that don’t seem to go together when you first think about it. I don’t know if any of you follow boxing, but welterweight world champion Manny Pacquiao is a pretty good example of this. I’ve seen this guy walk to the ring for a title fight literally laughing and horsing around with the crowd. Keep in mind, this is minutes before he steps into the ring to trade hands with another world-class prizefighter who wants to pound his skull into garden mulch. He’s got a big smile on his face, looking more like he’s at a birthday party than a fight. But then the bell rings, and he becomes a punching turbine that destroys anybody they put in front of him. He’s probably got the best mental switch in the world.

When you get this mastered, your lifting career is going to get a lot easier. I’m not just talking about meets, either. This is something you’ll be able to apply to daily training too. It’ll make life fun because you can lift without anxiety and angst, and you’ll be able to perform successfully when you need to. Your mentality will become, “I have a job to do and I know how to do it, so let’s go to work.” And you’ll be able to summon this up whenever you want it.

Charlie
How can you have an article about flipping mental switches without a single Lincoln Hawk / Over the Top reference?
Matt Foreman
You know what? You're absolutely right. That's a major screw-up on my part. I think I'll punish myself by listening to "Meet Me Half Way" by Kenny Loggins continually for the rest of the day.
Greg Everett
Matt, I'm sorry but Charlie is right. You're fired.

Or we can arm wrestle for it.

Matt Foreman
I totally understand, because I seriously dropped the ball on this one, especially considering I actually read the book to Over the Top (they really did write one) when I was in high school. And "Winner Takes It All" was on Eastbound and Down a few weeks ago.

With my elbows, I wouldn't even arm wrestle Aimee anymore...or Jade.

Greg Everett
I would do it using a shoulder horn for safety.
Josh Sutcliffe
A great way to break down the arousal curve. I play rugby and I suffered during my teenage/early 20s by trying to psych up. Now I play for fun and completely agree about the relaxation with intensity. I actually listen to "happy music" to keep from getting too uptight before matches. Thanks breaking it down like this.
Sallee
As a personal traneir i typically won't start with anyone til they are 14. you shouldnt get into really intense lifting til you are 16. i would recommend hiring a traneir to learn proper mechanics and nutrition if he counsels in that.If you start earlier than say 13, your body is under to much stress, with the body changes from puberty and growing to undertake the rigors of weight training and be able to recouperate.