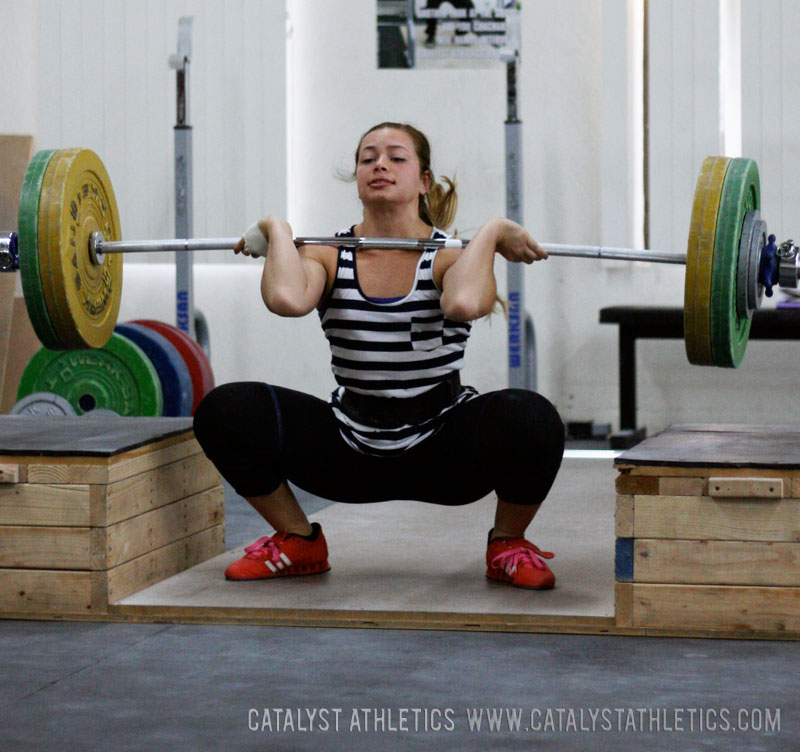 Possibly the biggest mistake I see people making with regard to technique training is simply not investing enough time into the training itself. With the easy and usually free access to an abundance of information about weightlifting technique now, it’s easy to spend hours and hours searching, reading and asking about technique, technique training, exercises, corrective drills and then whatever tangential topics sprout out. Yet when it comes to actually applying that information, athletes often fall short of what’s necessary.

Learning weightlifting technique is not that hard. Yes, it takes time and some brains and ideally a good coach. But teaching technique to the uninitiated is relatively easy; the complications are usually limitations related to mobility or injuries more than actual skill learning. What’s very difficult is re-learning—it’s immeasurably more difficult to teach proper technique to an athlete who has already learned and practiced poor technique than one who has no experience at all. This is the state many of you find yourselves in while doing all that digging around the internet, consulting with coaches, and training technique that I described in the beginning.

I really like Tommy Kono’s point (paraphrased): Practice doesn’t make perfect; practice makes permanent. The idea that practicing something is guaranteed to make it correct is nonsense. You’re simply training yourself to do what you’re doing exactly the way you’re doing it. If attention isn’t given to performing every single repetition as well as possible at that moment, you’re actually making things worse for yourself by further practicing what you’re doing wrong.

If you’ve been training for a couple years, you’ve done thousands of reps of any given common exercise. I find it fascinating that athletes will employ a corrective drill or exercise for maybe 30 total reps and be shocked when it doesn’t cure their technical problem. They then abandon the exercise because it doesn’t work, and move on to another one that, unsurprisingly enough, doesn’t work either in the same 30 reps. Do this for a month, and you can quickly exhaust the list of potential corrective exercises while managing to make no progress at all.

All of this being said, you can actually correct longstanding bad habits surprisingly quickly, in my opinion. Several weeks of training to correct five years of practice, to me, is a very brief timeframe and nothing short of amazing. But as an athlete, that several weeks can feel like an eternity, and the incremental changes can be unnoticeable during the process. It’s like talking to people about weight loss—they see themselves in the mirror every day and see no change and get discouraged. But friends and family who see them only occasionally notice dramatic changes. This is one of the values of having a coach—he or she can better see the changes and can help reassure you that the work you’re putting in is in fact paying off (and on the other hand, he or she can help you decide if something is genuinely not working and find a new solution).

Technique changes need to be a very active and full-time endeavor as well. If you’re trying to change habits, you can’t relegate the work to a fraction of your training time and then forget about it for the remainder of your workouts. Every single thing that’s related to the problem must be done in a way that reinforces what you’re trying to accomplish. A good example of this, because it’s something I seem to deal with constantly in my own gym, is overhead position. An athlete with a terrible overhead position to whom I’ve given a lot of specific corrective and supportive work will do the work as prescribed, but then not do anything when actually snatching or jerking to support the work. The athlete will drop snatches or jerks before even standing all the way up, warm-up jerks won’t even be fixed in the proper overhead position, and the overhead position will be only as active as absolutely necessary to not drop the bar on his or her head.

The point is that every single thing you do in a workout is an opportunity to improve if you choose to use it as such. Not approaching every training session with this intent is literally undoing your corrective work; you’re walking in circles, getting tired and going nowhere. To stay with the overhead example, by doing nothing more than holding every overhead lift for a second or two before dropping it and holding the bar as actively as possible whether its 20 kg or 150 kg, you’ve just multiplied the volume of practice you’re getting without adding a single repetition or exercise to your training, which is likely already as full as your schedule and recovery capacity allow. This is such a simple and effective thing to do, I find it stunning that I have to tell anyone to do it more than once.

We can categorize correction as either cues or practice. The former consists of the verbal (vocalized or internal) reminders that you or your coach give before or during a lift; the latter consists of drills or exercises intended to help you practice a proper movement or position. This could be an article of its own, but to simplify, I find that correction through the use of exercises is more effective than trying to correct through explanation and cuing. The brain is arguably the biggest problem in weightlifting. By training the body directly through exercises that isolate the elements we want to correct, we can largely cut the brain out of the equation and get more done. Ultimately, athletes have to feel a proper movement, not understand it conceptually. With this kind of training, cues that reference what the athlete has practiced are also more effective.

For the most part, athletes should be focused on technique to the fullest extent during these exercises, then minimize thought to technique when performing the classic lifts we’re trying to improve. That doesn’t mean no attention to technique is paid when snatching and clean & jerking, it just means that the athlete should put in most of the work with the corrective exercises so less needs to be done when executing the lifts and more energy can be put into actually being aggressive and generating power.

Habits are the product of practice, whether intentional or not. A bad habit is the product of practicing something you shouldn’t be doing. This can be anything from foil-smoking cocaine to shifting your weight too far forward over your feet too soon during a snatch. It’s very difficult to simply stop doing something habitual—you’re much more likely to be successful by replacing a bad habit with a good habit. That is, rather than trying to stop doing something, it’s more effective to practice doing what you want to be doing the way you want to be doing it. In some cases, it’s literally impossible to stop a certain behavior—the only option is to actively do something else. For example, if you have the bad habit of dropping your jerks prematurely, the only option is to start actively holding them overhead longer; you can’t simply not drop them early.

When performing corrective exercises and attempting to apply improved elements to the parent lift, always be focused on what you should be doing, never on what you should NOT be doing. In addition, don’t make the mistake of trying to correct or think about too many elements at once. My rule is that you get one before the lift starts and one during the lift. For example, prior to the lift, you might focus on generating tension in the start position with your arms relaxed; then once you start the lift, you might focus on maintaining pressure on your heels until the bar is all the way into your hips. Think about more than that, and you’re likely not to do anything right. It’s far better to successfully correct one thing at a time then fail to correct five.

This of course is one of the many advantages of having a good coach—your coach can prioritize and remind you of what you need to be focused on for any given lift. I try to give my lifters only one to two cues for each lift, and in order of execution to minimize confusion. I even try to keep those cues the same for an entire workout rather than trying to work on something different each set (this is not always possible, of course). I have certainly been guilty at times of overloading my athletes’ brains; I do my best to consciously minimize the number of words I let out of my mouth.

Finally, it’s important to recognize the importance of engaging in positive behavior and attitude rather than negativity. I mean this in the conventional new-age sense of actually being mentally positive about what you’re doing, but also in the sense of actively doing things rather than not doing things. Instead of thinking about how stupid your habit of dropping your jerks early is and wishing you would quit missing lifts, create a new habit of holding all of your jerks overhead for a second before dropping them. Not only will this improve your lifting, but it will improve your attitude and your training experience. You can stop stressing out about what a terrible failure of a weightlifter you are, and instead take pride and feel satisfaction in your hard work to improve. We don’t need to hold hands or anything, but I can’t stress enough how critical a positive, active and engaged mindset is to success in anything, particularly something like weightlifting, which is hours and hours of often monotonous and brutal work for years at a time for only a handful of very brief opportunities to demonstrate and enjoy its effects.

Champions and successful individuals in all arenas are the ones who understand this and are willing to put in the time and energy into all the minutiae that the common person will never even notice or care about. The champion knows that everything he or she does is important and affects performance, and never questions the need to make every repetition, every action and every thought positive and aimed at improvement. 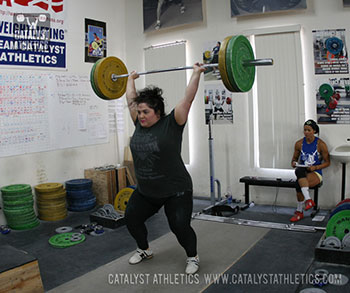 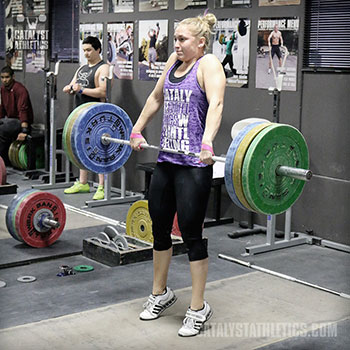 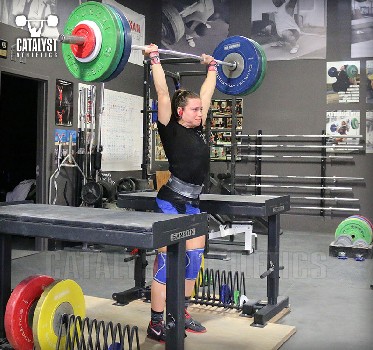 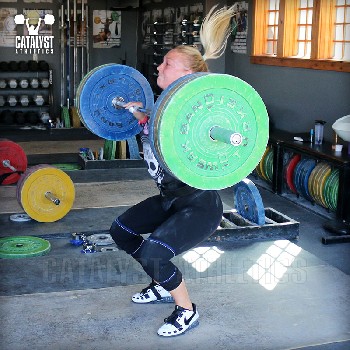 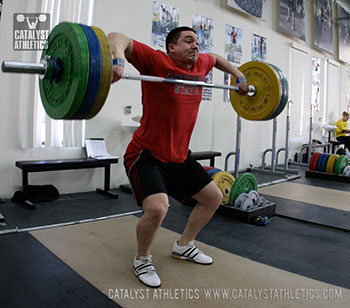