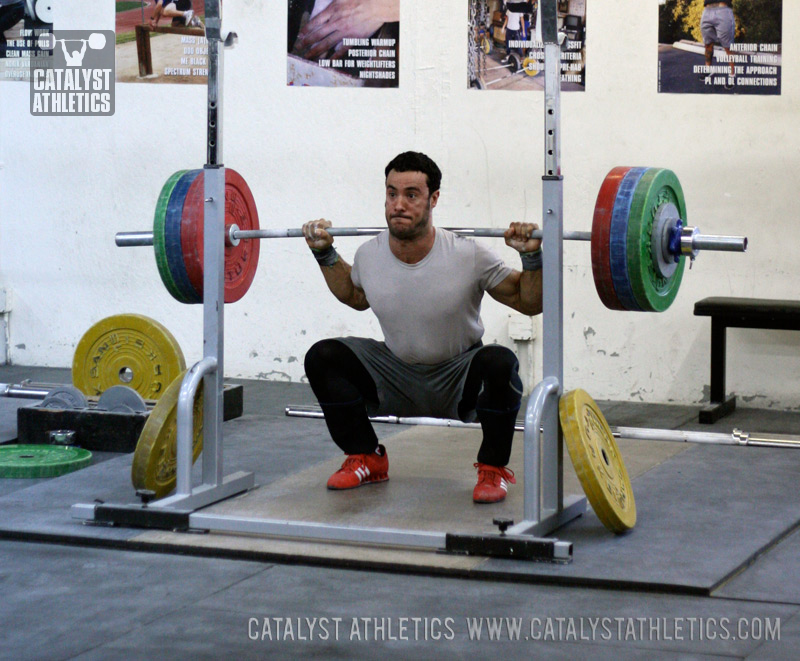 Several years ago, I was hanging out in the warm-up room at a meet, chatting with a guy who was a two-time Olympian. Neither of us were competing in this contest, so we were just relaxing backstage and watching the other lifters get ready. One of the athletes warming up was a relatively new guy who trained with the Olympian dude I was talking to. Here is the conversation we had:

Me (pointing at the new guy as he warmed up): “That guy trains with you, right?”

Me: “He looks pretty strong. Does he have any talent?”

Two-time Olympian: “Physically, he’s got a lot of tools. But he’s got one big problem he can’t seem to shake.”

Two-time Olympian: “He can convince himself that he’s a piece of s---t in ten seconds.”

As coaches, I think there are times when we forget that some of the people we work with have really, really low self-confidence. I think this happens because most coaches are very confident people themselves. When you’re a coach, you believe that you’re skilled and capable enough to teach others how to do something. It takes a strong self-opinion to assume this role.

And because coaches are people who believe in themselves pretty strongly, they often make the mistake of thinking everybody else is the same as them. We train athletes and we just naturally assume that they’re all as secure and confident as we are.

That’s a mistake. Some of the athletes we coach have little to no faith in their abilities. For a variety of reasons, they don’t believe in themselves. This is where the situation gets delicate because athletes with low self-esteem rely on their coaches for their confidence.

When this situation exists, the coach can change the athlete’s whole self-image…for better or worse. When the coach gives praise and encouragement, it can take the lifter’s confidence to a higher level than it has ever been to. And when the coach gives negativity and denigration, it can literally destroy any traces of inner strength that athlete might have had.

Many of us can remember comments people made to us ten years ago…or longer. The person who made the comment was probably somebody whose opinion mattered to you a lot, and they said something to you that you never forgot. Was it a positive thing, something that made you feel great about yourself? Or was it a crappy piece of negativity that got under your skin and discouraged you?

By the way, big strong guys can be just as susceptible to this as dainty little ladies. We’re all human.

If you’re a coach, this might scare you because you don’t want to say anything that’s going to crush somebody’s spirits. Well, there’s a really easy way to make sure that doesn’t happen. Just make sure you’re always, always, always, always staying positive and optimistic.

When they succeed, give them approval. Get fired up and congratulate them.
NOTE: Set up their training in a way that ensures they’re going to have a lot of successes, especially in the beginning.

When they fail, tell them it’s a temporary setback and you’ll both work together to fix it.
NOTE: They’ll believe what you say a lot more if they know you care about them.

If you try to coach people by using abuse and insults, you’re a loser. You should get out of coaching because you’re a disgrace to the profession. Go get a job doing something more suited to your personality, like jumping in a lake with a big rock tied to your neck.

Some of your athletes had it pretty rough before they walked in your gym. Some of them have been abused. Some were raised by scumbag parents who told them they were gonna fail every day when they were kids. Some of them battle emotional issues. The last thing they need is some sarcastic weightlifting coach making jokes in front of everybody about how lousy their snatch technique is.

And I’m not telling you to baby your athletes. You have to push them…hard. Nobody ever became successful by being coddled. The best coaches are borderline slave drivers. But they’re also cool people who inspire everybody around them. Their athletes don’t mind working hard because they have faith in what they’re doing and who’s telling them to do it.

Give it to them. You’ll be amazed at the results.

Greg Everett
Great post
Jocelyn
Thanks for the post. Another great one!
Steven Platek
Dude, I love your posts, generally speaking, but this one is spot on and really hits home with me! Thanks for writing it. I'm that dude, I can deadlift over 600, my snatch is ass. Thank goodness I have a super positive and encouraging coach!
Avery W
This is an awesome post. I have been on both sides of this and having a coach who truly believes in you when you don't know how to believe in yourself is invaluable.
Ryan
Do coaches who "coach people by using abuse and insults" actually exist? If they do I can't imagine they would be in business for very long once their reputation become known. I've been fortunate enough to have great coaches in all my endeavors.
Matt Foreman
Hey Ryan,
Yeah, they're out there. I personally worked with two of them, back when I was younger, and I've also seen one or two in action with other athletes. Also, one of the reasons why I wrote this blog was because I had a couple of lifters contact me on facebook asking for advice about this area. Basically, their questions were like, "My coach is a jerk who treats me like crap, what should I do?" So these types of personalities are real. But as you pointed out, they're very rare (fortunately).

Robbie Schulz
Great article, I related to as both athlete and motivator to my classes. Thanks
Kirsty
Great article Matt.. "With great power comes great responsibility"
Kim
This article is pretty awesome. I mostly agree. Accept for the part where you tell the coaches who are doing it wrong to go jump in a lake. Is bullying a bully really the answer? Perhaps they were also abused as a child and it made them strong, so they made the wrong assumption that everyone is that way, and they just need to be shown the right way.
Blair Lowe
Glad to see this reposted again as I don't remember it. Definitely some things I need to think about as a coach.
Chason Hayes
This type of coaching is a lot more prevalent in football than weightlifting or other sports in my experience. I was helping out a junior high school team last year and this so called expert coach was berating kids over their performance that was mainly due to his unrealistic expectations and inadequate coaching. I stopped what I was doing and pulled him aside because the head coach was not doing anything. Needless to say he didn't take criticism very well which is all to common in these personalities.

Check out the positive coaching alliance. Great organization
joel
Nor is it cool to denigrate coaches who also need positive insight and feedback by telling them to tie a rock around their neck and jump in a lake. model the behaviors you seek to encourage.
Jack
I agree with Joel. Should've edited that sentence out.
Tandramoto
Loved this, every word of it. Don't worry guys, only a couple bad guys drowned in a lake after reading this.