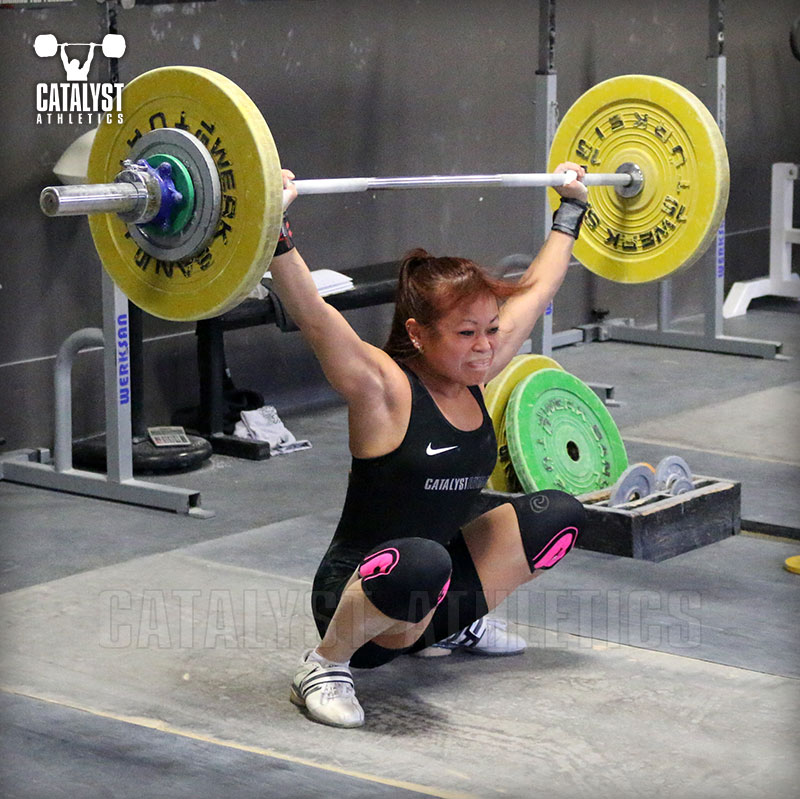 Let me tell you a quick story. I was coaching a lifter at the American Open once, and we were in the back getting him warmed up for the snatch. This was his first Open, and we were planning to start him with 113 kg (his PR was 120).

Even with 70 kg, his nerves were starting to get to him. The bar looked a little shakier than usual, positions were tight and hesitant, etc., but he still made his warmup snatches up to 95 kg fairly solid.

Then he missed 100 badly, out in front. We repeated and he held on for a good lift. Then he missed 105 a couple minutes later, big overpull that went behind. At this point, the meet was moving quickly and we didn’t have time to repeat the 105, so we went straight to 110 (his last warm up). He missed this one too. Now the bar was already at 113 out on the competition platform, and we only had about 3-4 minutes before we had to go out there. I couldn’t move his opener down to anything lighter. He was crapping his pants, obviously.

Want to know what I did? I took the bar down to 70 kg and told him, “Snatch it.” He snatched it easily, then looked at me. I could see his eyes settling down a bit. So I said, “Snatch it again.” He snatched it easily again, and I literally saw him take a deep breath and exhale calmly after he made it. I looked at him and smiled and said, “Okay, now you’re fine. Just go out there and do the same thing.”

He made his opener with 113, made his second attempt at 118, and came extremely close with a big 123, which would have been a 3 kg PR. Pretty good day, considering the debacle that led up to it.

Sometimes athletes just lose their rhythm. They lose the feel of the lift. It’s got nothing to do with strength, or even technique. It’s about timing and composure. After they’ve screwed up a few lifts, their movements are rattled. Panic often sets in when this happens, especially if it happens in competition.

If you’re an athlete, one of the best weapons you can ever have is the psychological ability to stay cool in these situations. When you mess up a lift, you don’t piss down your leg and start getting excuses lined up in your head, planning out what you’re going to tell your family and friends when they ask why you blew it. You simply think about what you did wrong, think about what you need to do to fix it, and move on to the next one without blowing a gasket.

Most athletes aren’t born with this ability. It has to be developed through experience. This is why you rarely see veteran competitors having mental meltdowns. They’ve been there before. They’ve stepped into big holes and had to dig themselves out. Once you’ve done this multiple times, you simply develop the confidence that you’ll be able to do it again if you need to.

I once lifted in the National Championship and opened with a 180 kg C&J. I missed the jerk on my first attempt, repeated and missed the clean on my second, and then jumped to 185 kg (which was a PR at the time) and made it on my last attempt. If I made that last lift, I set a new PR and won the bronze medal. If I missed it, I bombed at the Nationals. I got the job done and showed a lot of mental strength that day, but this meet happened after I had been competing for almost 10 years. I don’t know if I could have done this when I was a beginner. Probably not.

Are we all going to pull it off and work miracles every time? Hell no. Naim Suleymanoglu, the greatest lifter of all time, bombed out at his last Olympics. So did Vasily Alexeev and David Rigert. These guys were the ultimate veteran miracle workers in the game, and even they got melted down to nothing at some point. It can happen, no matter how good you are.

But the reason we remember Suleymanoglu, Alexeev, and Rigert so well is because they won the battle a lot more than they lost it. They might have failed at times, but their successes completely overshadowed it.

You can become the same kind of athlete if you hang in there and keep trying long enough. You might never have the ability to win an Olympic gold medal, but that doesn’t mean you can’t become a great competitor who rattles off your own list of successes.

A lot of things go into the building of a tough fighter. But the main one is always going to be the willingness to simply…keep fighting. You can’t get experience without time, and you can’t accumulate time if you quit and walk away. You have to pay your dues.

TheO tz
I would say and Purros Dimas
Tarra Lyons
This article is terrific, particularly the last paragraph because it says so much about so many things, not just weightlifting. I teach college level art and everything you said there is what I have said (in other words) to my students,,,,I love the way you said it.
"A lot of things go into the building of a tough fighter.(artist) But the main one is always going to be the willingness to simply…keep fighting.(working) You can’t get experience without time, and you can’t accumulate time if you quit and walk away. You have to pay your dues.